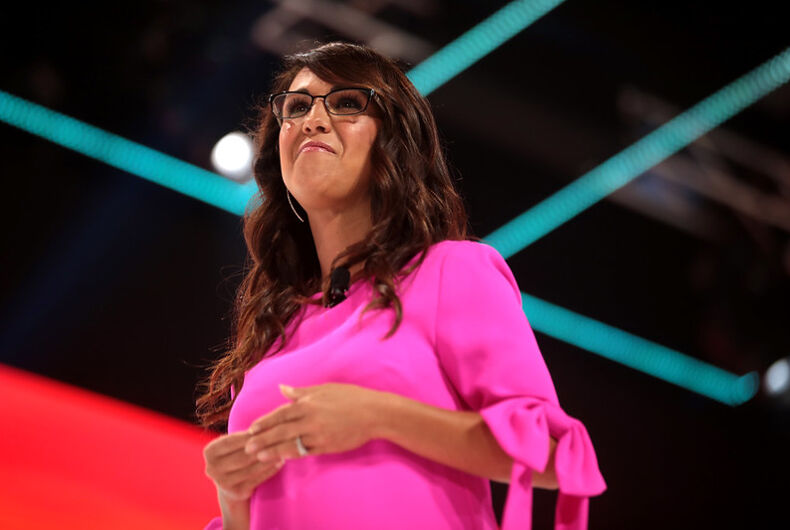 Rep. Lauren Boebert (R-CO) is opposed to the $1.7 trillion spending bill the House is expected to vote on later today, and she has some of the most bizarre reasons for opposing the bill, calling it “disgusting,” “un-American,” and “wrong.”

Instead of just attacking the bill’s military aid for Ukraine, election reforms, health care and child care funding, and funds for food assistance, Boebert is accusing the bill of “sexualizing” her four sons.

“Why do you want to sexualize our children?” she asks in a video posted to social media opposing the bill, addressing those voting for the bill. “I have four boys! And this law is targeting children of their ages all across America.”

She then explains that she is referring to some small grants for LGBTQ+ programs, including $1.2 million for LGBTQ+ students in San Diego and half a million for the Long Island Gay and Lesbian Youth Program. The programs she cites make up less than 0.00013% of the total bill’s funding, and none of them have anything to do with Colorado, where her sons live.

“This isn’t about consenting adults living their lives,” she says, as if there is something untoward about people under the age of 18 being LGBTQ+. Boebert herself dropped out of high school while pregnant with her first child, so one would think that she can understand that teenagers are capable of experiencing sexual attraction. She has said in the past that people under age 21 should be banned from coming out.

“I’m working hard in D.C. to protect the freedoms of all Americans,” she says, even though she opposes all LGBTQ+ rights legislation, including the Equality Act, which would ban discrimination against LGBTQ+ people, and the Respect for Marriage Act, which protects some same-sex marriage rights if the Supreme Court overturns Obergefell v. Hodges.

“But this bill funds the sexualization of our children and that is disgusting, it’s un-American, and it’s wrong!”

Boebert says Senators voting for the Omnibus Bill are trying to “sexualize” her 4 boys. pic.twitter.com/qGMFlkKH0p

The omnibus bill is Congress’s attempt to keep Republicans – who will control the House of Representatives next year – from taking the budget process hostage in future negotiations with the Democratic Senate and President Joe Biden. It also includes some bipartisan initiatives that some Republicans oppose, like funding for prosecutions of January 6 rioters, funding for the Capitol Police, and aid for Ukraine. The bill funds the federal government through September 2023.

The Senate passed the bill yesterday and the House is expected to pass it today. Eighteen Republican senators voted in favor of the bill while House Minority Leader Kevin McCarthy (R-CA) vowed that the House would not consider bills sponsored by those 18 GOP senators for the next two years as a punishment for their votes.

Republicans have generally attacked the bill’s price tag and the fact that they won’t be able to use cutting funding to the federal government as a tactic to extract concessions from Biden and Democrats for most of next year.