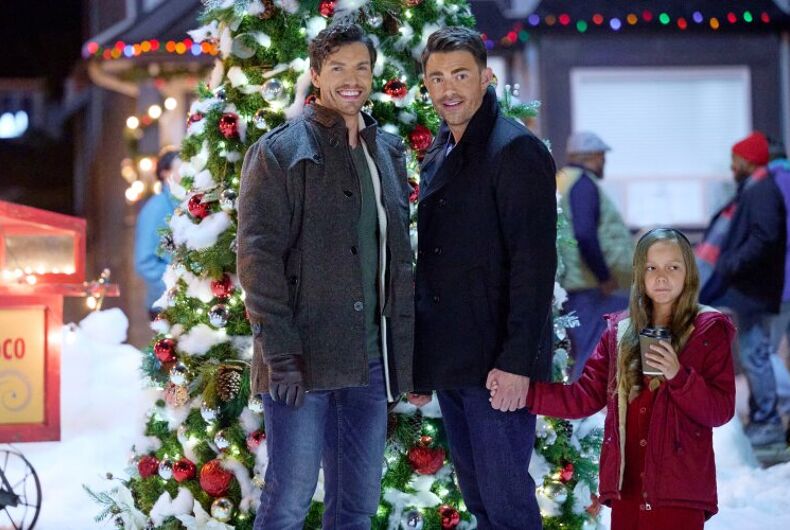 Earlier this month, the Hallmark Channel premiered its first-ever Christmas movie centered on a gay couple. In the recent history of the network’s gradual move toward diversifying its uber popular yuletide programming, this was a bit of a milestone!

Now, despite being a person who generally enjoys Christmas—in a secular, festival of lights in the grim dead of winter kind of way—I am not a person with much time for the treacly, prepackaged, cheap sentiment that I understand to be the cornerstone of these type of low-budget, made-for-TV/streaming flicks. But I’ll be damned if I wasn’t curious about what Hallmark might do with a gay story. So, I watched The Holiday Sitter—which you can still do, as it is re-running a few times between now and New Year’s. And I had some thoughts.

The Holiday Sitter stars out actor and reality show host Jonathan Bennett (he was in Mean Girls several hundred years ago). He plays a gay guy who lives in New York City and has a big important job and no time/interest in being married or having kids. But then, a week or something before Christmas, his sister and her husband call upon him to babysit his niece and nephew somewhere in Small Town U.S.A. while they pick up the newborn baby they are adopting. Meanwhile, there is a handsome gay named Jason (George Krissa) who lives across the street from J.Bennett’s sister and loves kids and wants to adopt one immediately. So, J.Bennett offers to pay Jason a bazillion dollars to help him take care of his niece and nephew for the week.

That’s the basic plot. Here’s what popped into my sugarplum-addled brain while watching:

The movie opens with what I think is a Dolly Parton song, so we are solidly in the Venn diagram overlap of gay and Hallmark.

In the opening scene, J.Bennett is on what is apparently a first date with a very handsome guy. Do people actually go on first dates at Christmas? Like, how does anyone find the time??? With all the holiday pressure, it feels like there should be a hold on that sort of thing from Thanksgiving to maybe New Year’s Eve.

The Christmas décor in these movies always feels so…generic. Like…devoid of personality or history. Like everyone’s house is a mall. Literally, they all have the same color scheme!

Oh wait, J.Bennett’s sister’s house is all done up in blue and silver instead of red and gold like everyone else! That’s…a choice!

The energy J.Bennett is bringing to this role is…chaotic! Like, somewhere between Jim Carrey and Lucille Ball, maybe? Crazy eyes, rubber face, and spastic body language.

Honestly, at this point, I feel like J.Bennett should have got with that hunky dude from the date at the opening scene. He was so hunky! And blue-eyed Jason is such a bland weirdo I’m worried he might be a serial killer!

Ok, so…J.Bennett…does not realize the blue-eyed possible maniac is gay until he…recognizes J.Bennett’s “Rossini loafers?” 1) J.Bennett’s gaydar is broken. 2) “Rossini” is a “designer” this movie totally made up, right? 3) Why? Why not just say YSL or something? 4) Drink every time these nerds say “Rossini loafers.”

I do not care about the subplot where J.Bennett’s nephew has a crush on Blue-Eyed Psycho’s niece.

One of J.Bennett’s characteristics is that he throws money around constantly. How rich is he, exactly? And what is his job?

So, J.Bennett’s original plan was to spend Christmas in Hawaii, so at one point, he’s wearing this Tommy Bahama-esque Christmas shirt that he packed. I find this shirt…baffling. I feel like I know even less about who this man is, what he wants out of life, how he moves through the world…

J.Bennett’s sister’s neighborhood has a Christmas lights walk, which sounds actually really lovely and possibly romantic. Except the lights these people put up are terrible! Like…Hallmark didn’t budget properly for Christmas lights in their Christmas movie.

No one in this movie has literally ever had sex.

J.Bennett teaching his nephew how to act for the school Christmas play: “I took speech classes in college.” To get rid of your lisp???

I bet J.Bennett’s character is a Disney gay. Like one of those people who has a Disneyland t-shirt that says “home.” But he’s never been to Gay Days or whatever it’s called.

Ok, hang on. So, J.Bennett’s niece is all sad that it’s almost Christmas and her parents aren’t home yet from adopting their new baby. So, he…monologues at her about how weird but also great it is to have a baby sibling. That’s…not what she was upset about!

At this point, I would not be at all surprised if J.Bennett’s sister is like, “Surprise, this newborn baby we just adopted is actually for YOU, Blue-Eyed Weirdo from across the street! Merry Christmas!” That feels like the kind of thing that totally happens and makes sense in a movie like this, right?

Why is…Blue-Eyes all butt hurt that J.Bennett is paying him AS PER THEIR PREVIOUSLY AGREED UPON DEAL??? Like, just because you are falling in love with someone 100 percent does not mean they get to renege on financial agreements!

Christmas morning: men in pajamas are the opposite of sexy.

LOL! Less than 10 minutes left in this movie and J.Bennett is suddenly (obliquely) like: “Homophobia exists and it ruined me!” (I mean, fine, I guess I have to give Hallmark credit for acknowledging how growing up in a heterosexist society has made J.Bennett feel like marriage and kids aren’t for him and that’s why he’s always thought he never wanted them. But I do so begrudgingly.)

Ok, so the funniest part of this movie is when Blue-Eyes is like, “Yeah, I really do love J.Bennett, but I can tell him when he gets back from Hawaii.” And his divorced brother is like, “Sure…unless he meets a hot guy in Hawaii who is more compatible with him because he isn’t a weirdo who is obsessed with having kids right away like you.” And Blue-Eyes springs to his feet and is like “I never thought of that!” and runs to stop J.Bennett from escaping Small Town U.S.A.

Oh, cool, J.Bennett and Blue-Eyed Jason do get to kiss. The End! It’s fine and normal not to want a husband and kids! Merry Holidays!