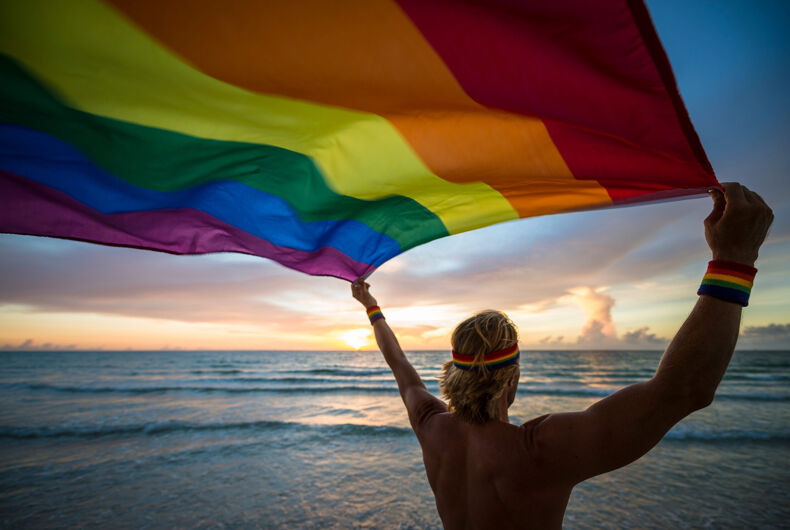 If the events of the last few weeks make you want to yeet yourself from society to an island for queers only, you’re not alone. Just know people tried it already, and while it wasn’t a total disaster? The results were not a fantastical, freezy-drink-laden utopia.

Fed up to their retinas with anti-gay legislation and rhetoric, a pack of LGBTQ Australians decided in 2004 to abandon the tyranny of their backasswards country. This was the same year Aussie politicians ruled marriage a “union of a man and a woman to the exclusion of all others,” dashing millions of gay citizens’ hopes of receiving spousal rights, benefits, and adoption abilities. Citing a legal loophole called unjust enrichment, several activists went all-in on “queer sovereignty,” the theory that un-assimilating from mainstream society is the only path to liberation.

The original baker’s dozen of queer pioneers, bolstered by legal advice and donations from the broader non-local community, decided to claim an archipelago of uninhabited islets just off the Great Barrier Reef. Their ship—a recreational boat owned by one guy’s brother, christened The Gayflower—landed in June. Their rainbow flag was planted on June 14, 2004, on the highest point of the island chain…which wasn’t high. Caro Island, the home base of the settlement, was a shore-rimmed droplet of land covered mostly in sand and shrubs. Its newly flag-marked “capital” was a campground devoid of running water, electricity, or adequate protection from tropical storms.

Nevertheless, The Gay and Lesbian Kingdom of the Coral Sea—colloquially called The Gay Kingdom—officially made its presence known shortly after that. The settlers sent a formal Declaration of Independence to Australia’s parliament, stating:

“Homosexual people have honestly [endeavored] everywhere to merge ourselves in the social life of surrounding communities and to be treated equally. We are not permitted to do so. In vain we are loyal patriots, our loyalty in some places running to extremes; in vain do we make the same sacrifices of life and property as our fellow citizens; in vain do we strive to increase the fame of our native land in science and art, or her wealth by trade and commerce…in countries where we have lived for centuries, we are still cried down as strangers.”

Establishing a subtly Gilligan’s Island Post Office (red mailbox on a wooden spike in a pile of sand) on the kingdom’s capital was priority one, legitimizing the landmass as kingdom property. Jerry Herman’s “I Am What I Am” was set as the national anthem, and the pink triangle appointed its official coat of arms.

In possibly the boldest economic move of the century, it was decided 100% of the kingdom’s income would be generated entirely by sales of collectible postage stamps. Seriously.

For reasons relating to “our friend might have royal blood, and also no one wants this job,” The Gay Kingdom appointed introvert Dale Parker Anderson, 38 at the time of his ascension, as Emperor. (Anderson identified on the kingdom’s now-defunct website as a descendant of gay British king Edward II, a claim no qualified historian has been motivated to challenge.) Though controversial amongst progressive kingdom members, lawyers encouraged this “constitutional monarchy” on the off-chance Australia ever tried to prosecute the activists for treason.

Which it did not. Australia’s government handled the Gay Kingdom’s succession by refusing to acknowledge it publicly for the next decade.

In September 2004, the ramshackle Gay Kingdom of the Coral Sea formally declared war on Australia. For emphasis, they sent a press release and copy of the war declaration to Switzerland’s government. But since they had no army, navy, or full-time residents, both The Gay Kingdom and the mainland understood the move to be a symbolic gesture. It was also a savvy PR move, landing Emperor Dale I in many of Australia’s mainstream newspapers while moving some of those collectible stamps.

As a sovereign nation capable of producing an improved quality of life for queer people, The Gay Kingdom was—no disrespect to Emperor Dale—crap. While its reported incidence of hate crimes sat at “0” for its entire existence, this is because the island had no full-time population or infrastructure to speak of. As a political protest, however, the settlement exhibited the kind of tongue-in-cheek audaciousness which helped sway public opinion about so-called “moral” issues like same-sex marriage and contributed in its scrappy way to Australia finally moving away from inequitable, Puritanical laws.

The Gay Kingdom was formally dissolved on November 17, 2017, once Australia inked marriage equality into law. It joins The Furies commune of the USA, and unofficial “gayborhoods” of the London Gay Liberation Front, as one of the few fascinating experiments in queer succession.

You can learn more about its founding, infighting, and quiet exit from the excellent team over at WNYC’s Nancy.

18 LGBTQ+ Words added to the Oxford English Dictionary in 2022