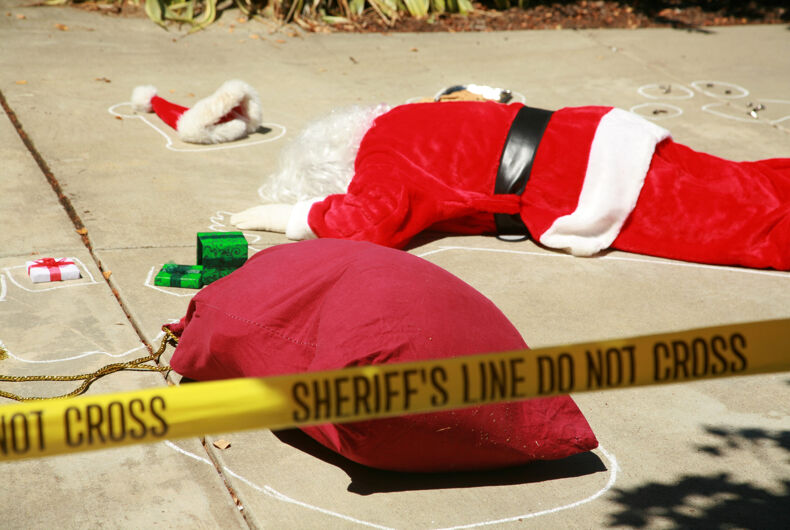 Paul Schafer raised his weapon, exhaled evenly, and waited for Santa Claus’ rotund, crimson body to float into his crosshairs. Then he pulled the trigger.

Conservative pundits and Evangelical figureheads notoriously spend December keening over “The War on Christmas,” penning books on the subject, producing TV segments on its spread, and demanding legal protections against “liberals” who nefariously suppress seasonal jolliness. But, historically speaking anyway, the most egregious crimes against Christmas—like canceling it altogether—have ironically been perpetrated by either religious conservatives or fascists. (Keeping in mind the Venn Diagram of these groups overlap heavily.)

Example: Paul Schafer, devout anti-gay Christian cult leader and convicted Nazi pedophile, took The War on Christmas to new lows back in the mid-20th century by staging the murder of Santa Claus in front of children.

To fully appreciate the insanity of this dramatic assassination, some background is needed on how an Evangelical titan like Schafer landed in Chile with an audience of kids.

Born December 4, 1921, young Paul was raised by poor Lutheran parents near Bonn, Germany. Like many adolescent boys of his generation, Adolph Hitler was his idol. Schafer desperately wanted to join the Nazi Schutzstaffel, or SS, but had tragically blinded himself in one eye with a dinner fork while tying his own shoes—don’t ask how, the best primary sources only offer that Paul was “clumsy”—a few years prior, making him unfit for service due to poor depth perception.

After the war, Schafer took a position as a youth pastor with Germany’s Evangelical Free Church. When rumors circulated that Schafer was molesting young boys in his care, he was dismissed from the job and briefly moved into the dark forest on the outskirts of the village. This is where he claims to have first met Jesus Christ, receiving a message from God that he should seek out and lead other “true believers.”

This revelation connected Schafer with charismatic American Evangelical “prophet” William Branham, one of the founders of televangelism, pillar of the Healing Revival movement, and mentor to infamous cult leader Jim Jones of The Jonestown Massacre.

His influence inspired Schafer, then an itinerant preacher with a growing handful of followers, to set up a home for war widows and orphans (aka vulnerable targets) in 1952. Within a handful of years, however, German police came for Schafer on allegations of child molestation. Schafer and part of his flock quietly fled the country, eventually landing in Chile around 1960.

This is where Schafer established Colonia Dignidad, an isolated valley colony where he claimed his congregation could finally worship without “persecution.”

Characterizing Schafer as another anti-gay Evangelical does the full breadth of his bigotry a disservice. Schafer was anti-sex and anti-intimacy, preaching that love for one’s own family was a distraction from God. He separated husbands from wives using gendered barracks, then parents from their children, making himself the standalone “Father” who lived alone with the Colonia’s juvenile members.

One survivor of this children’s house would later call Schafer’s colony “pedophile paradise.”

Schafer also demanded absolute adoration from his acolytes, and while most complied obediently, the children of Colonia Dignidad openly demonstrated love for another: Santa Claus.

This drove Schafer to literal fits of jealousy.

According to residents of the community, Schafer eventually arranged for a male cult member to dress like Santa and “visit” the children one afternoon, ordering him to float down the river running through their land on a raft. As the congregation gathered on the banks with Schafer, Santa appeared, waving to his overjoyed young fans.

That’s when Schafer drew the sidearm he regularly carried and fired upon Santa. The children shrieked, watching in horror as St. Nick collapsed into the water, sunk beneath its surface, then drifted motionlessly downstream.

Schafer told the children Santa was dead because God was offended by their worshipping false idols. Then he made his own birthday, December 4, the only winter holiday which could be celebrated from that point forward. (The man playing Santa hadn’t actually been killed, FWIW.)

In the end, this stunt would be one of the least offensive and problematic of Schafer’s sordid career. The German ex-pat, who spent years working part-time as a paid torturer for fascist General Augusto Pinochet, would eventually be busted for an unholy amount of child rape and human rights crimes. If you’re curious, this Behind the Bastards podcast episode and this streamable documentary series both break down his complete resume of heinous acts.

Paul Schafer died of heart failure in a Chilean prison in 2010 at age 89. He is not the only Evangelical pedophile to preach against homosexuality and moral sins while egregiously sinning daily, but he is the only one we have on record murdering Santa Claus and replacing Christmas with his own birthday.

Do jokes about “you old queen” lower gay men’s lifespan?

A Ron DeSantis presidency would have dire consequences