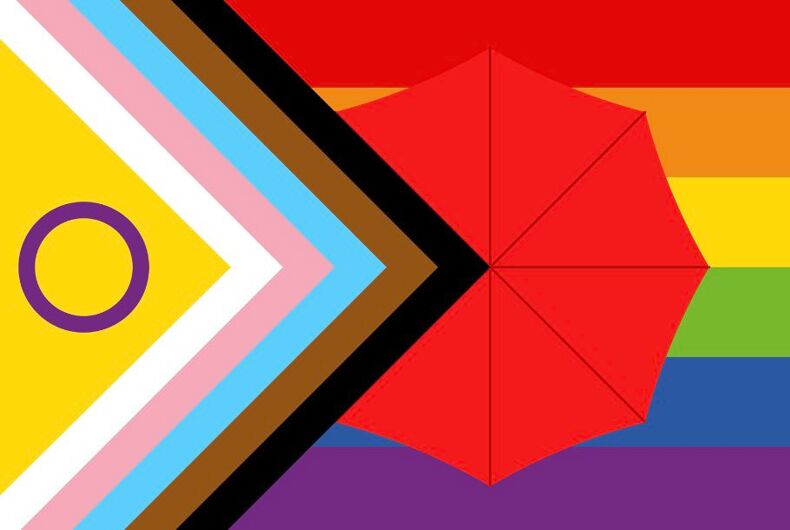 A version of the Progress Pride flag with an umbrella to include sex workers has been circulating onlinePhoto: Twitter

Conservatives have worked themselves into a froth over an incarnation of the Progress Pride flag that includes a red umbrella representing sex workers. They seem to believe that the design has been voted on and approved by the LGBTQ+ community’s “governing authority.”

The original rainbow flag has been tweaked and lifted so much recently that the confusion is reasonable – even a few LGBTQ+ community members have fallen for it now.

But the umbrella addition isn’t a new reveal. The design is two years old and has previously been used by Chaya Raichik of the viciously anti-LGBTQ+ Twitter account “Libs of TikTok” to paint queer people as sexual predators. It’s manufactured rightwing outrage over a flag design that no one uses or champions.

That didn’t stop some hilarious reactions from MAGA supporters absolutely sure that the community had held a meeting.

“Who is the governing authority that owns & makes changes to this flag?” one user wondered.

They're literally tried this already a year ago:

A red umbrella was added to the gay alphabet flag to include sex workers. pic.twitter.com/h1qfYXOe0q

The next group of people to feel marginalized

Where are disabled people on the flag? It’s ableist!

They added a Red Umbrella to the gay pride flag for all the Sex Workers..
Love isn't really love if it's got a dollar sign behind it..
The new Oh! So! Brave!!
————– Hookersexuals!!!! pic.twitter.com/3UdiDOP4vz

May as well include the left handed in the flag, it makes as much sense

The Progress Pride flag is an update of an update to the original and classic rainbow Pride flag by Gilbert Baker. While well-intentioned, it has proven controversial, both because of the addition of other colors meant to identify specific people inside the community and because Daniel Quasar, the creator, has retained the copyright over the design and charges its use.

It includes five new colors shaped into an arrow or a chevron pointing right. The colors are black, brown, light blue, pink, and white. Quasar’s design is a redesign of a pride flag that the city of Philadelphia launched in June 2017 that features black and brown stripes on top of the standard six rainbow colors. The black and brown colors represent marginalized LGBTQ+ people of color, those living with AIDS/HIV, and those who died from AIDS/HIV complications.

Quasar also added light blue, pink, and white to represent the transgender community. The colors appear on the transgender pride flag created by Monica Helms in 1999. The advocacy group Intersex Equality Rights UK launched a version of Quasar’s Progress Pride flag that incorporates the intersex flag by housing the golden yellow background and purple circle of the intersex flag in a triangle inside the five-striped chevron.

Other versions of the updated flag have come and gone, embraced by some and outright rejected by others, but one has endured. In 1978, artist Gilbert Baker designed the first pride flag. It was created after then-San Francisco city Supervisor Harvey Milk requested Baker design something that could stand as a symbol of pride for the LGBTQ+ community. Baker’s flag consists of eight colors, representing:

To be clear, none of the versions is the “official” Pride flag. There isn’t one; people just fly whichever flag or flags speak to them most.