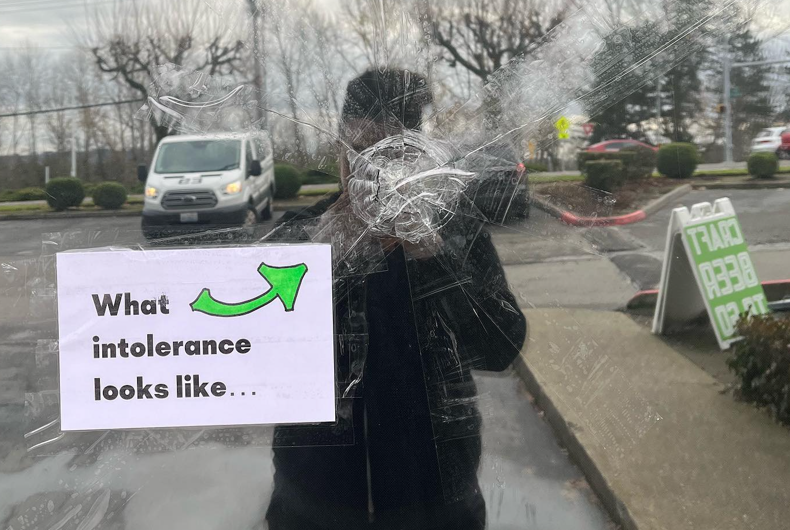 A Seattle-area pub was hit by gunfire yesterday, days before a scheduled drag queen story hour and bingo night.

The Brewmaster’s Taproom in Renton, Washington, just south of Seattle, was hit a single gunshot to their front window in a drive-by shooting around noon on Wednesday. The pub’s monthly Drag Queen Storytime and Rainbow Bingo events will go on as planned on Saturday.

Brewmaster’s owner Marley Rall told LGBTQ Nation she was working at home when she got a text from an employee at the coffee stand next door to the pub. “They just texted me and said, ‘Hey, I just watched this.'”

Rall said the assailant had removed the license plates from the car and was wearing a mask and gloves.

Rall posted to Facebook: “So just an update for everyone. Our taproom was shot at today around noon. We believe it has to do with the people who are upset about our Drag Queen Story Time. We would like you to know we are still going to have drag queen storytime. But we also want to be transparent with parents. Renton PD is aware and has set up cameras.”

“Hatred isn’t pretty,” one commenter posted. “Hang in there. A lot of us will be there to support you! Grateful for your inclusion of all people.” Rall, who lives with her husband in Renton, calls herself a staunch ally of the LGBTQ+ community. 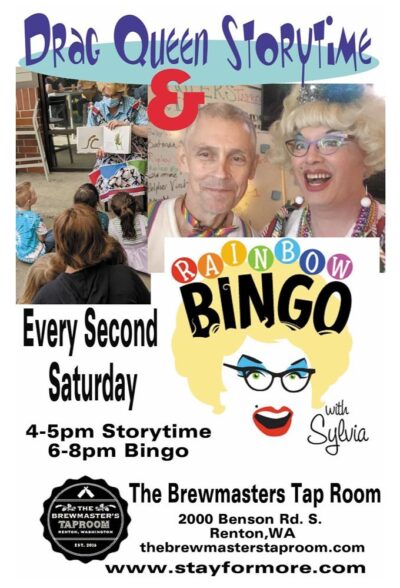 The shooting comes after plans for a protest at the event by right-wing anti-LGBTQ+ groups came to light. “We are aware of the chatter and threats,” Rall wrote in a Facebook post Tuesday. “Every month we get emails and phone calls about our Drag Queen Story Time. Never have we had issues, but this time feels different.”

Rall said she noticed unusual activity on the tap room’s Facebook page Monday night. “I get a notification,” Rall said, and a woman “had posted on our newsletter, ‘This is fucking disgusting,’ and ‘You’re fucking groomers and you’re pedophiles,’ and then had scrolled through our Facebook page to go find another post from the month before, specifically for our drag queen storytime and bingo.”

Rall was also made aware of a protest flyer originating with right-wing group Wake Up WA State that had spread across social media and was shared by advocacy group LGBTQIA+ Renton and a local councilwoman. Calls for protest also made their way to Reddit, where one poster suggested shooting up a transformer to deprive Brewmasters of power during the event.

“So I screenshot it and send it to the city,” Rall says. “This is a thing and somebody clearly wants to replicate what was going on in North Carolina.” She was referring to a

Following the shooting Wednesday, Wake Up WA State scrubbed their Facebook account of any reference to the event.

“Wake Up WA State is shutting its pages down at least for now,” wrote group organizer Justine Andrina. “We talked about it a lot and made this decision because the people running the groups are putting themselves at risk at this point and the benefit is outweighing the risks [sic].”

A deleted post archived by a Brewmaster supporter illustrated Wake Up WA State’s role in the protest and purported cancellation.

Andrina shared: “Per the organizer holding the protest: ‘Based on some recent developments we’ve decided to pull the plug on Saturday. Someone took a shot at the bar today.’ I don’t know if it was a false flag or a patriot who got too hotheaded. Either way, it now seems like a major security issue and since children will be present, we made the decision to cancel. If you are able to make a note of that on Wake Up WA FB, it would be appreciated. Thanks.”

“Whoever did this to Brewmasters,” Andrina wrote, “you’re sick in the head.”

Rall says both her parents lost family in the Holocaust, and they made sure she could recite the poem First They Came.

“Just because it doesn’t personally impact you, one day, you’re going to turn around and nobody’s going to be there, because it will,” she said. “This is about keeping everybody safe, and making sure that everybody continues to feel comfortable coming out and being their authentic self.”