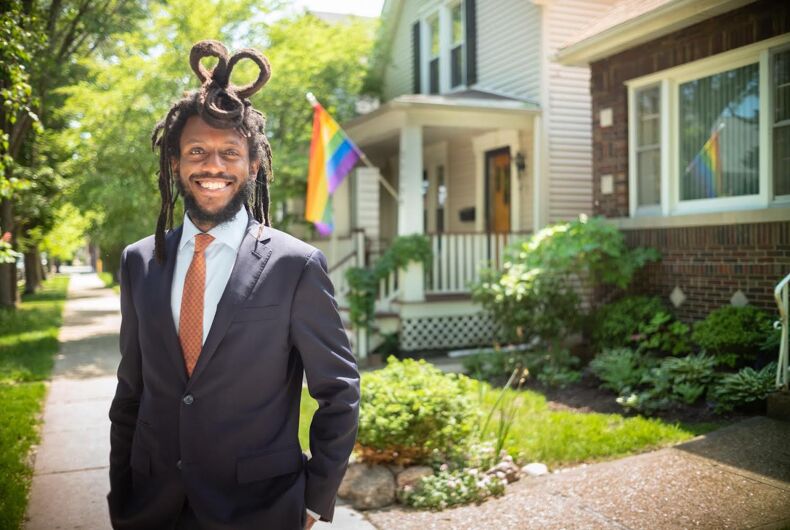 Mike Simmons’ campaign slogan is a pretty accurate description of his organizing principle: The candidate is “Here for it.”

Before an early evening interview with LGBTQ Nation, the out Illinois state senator for District 7 spent a “crazy day” racing between “political meetings, government side meetings, [and] ribbon cuttings.”

And it wasn’t over yet. Next up was an appearance at a comedy club with an audience of artists, musicians and theater types. “They usually bring in comedians, but they’re bringing me in to give folks a crash course on the state senate, and myself, what I do in the district. Busy day, definitely a good day in the life,” Simmons said.

Simmons bikes fifty miles a week, and at 39 looks and acts like he’ll be able to recycle that birthday indefinitely. After nearly 20 years in public service, he landed in his senate seat almost incidentally, when the previous occupant unexpectedly resigned.

Following a dozen public forums organized by community organizations, Simmons’ deep ties to the district – where he was raised and lives – garnered 75% of the vote from the local committee filling the seat. He became the first person of color to represent his district and the first member of the LGBTQ community to serve in the Illinois State Senate. Now he’s running to add “elected” to the honorifics.

Simmons and his younger sister were raised in a “scrappy household.” They lived with their mom, uncles and grandmother in the Lincoln Square neighborhood on Chicago’s North Side, in one of the city’s first scattered-site public housing units. His mom supported the family with her neighborhood hair salon; his dad was a political refugee who fled Ethiopia’s Red Terror in the late 1970s.

Simmons attended public schools and earned a full-ride scholarship to Amherst College, where he served as student body president and spent a summer interning in Washington, D.C. for then-U.S. senator Barack Obama (D). A job as legislative correspondent with Illinois senior senator Dick Durbin (D) followed. He then worked with Chicago mayor Rahm Emanuel (D) as a policy director and Deputy Commissioner in the city’s Department of Planning and Development.

One of his clients was the Obama Foundation, which led Simmons back into the former president’s orbit as deputy director of youth programs for My Brother’s Keeper Alliance, started in the aftermath of Trayvon Martin’s killing in 2012. “It’s very, very close to his heart,” says Simmons. “It’s his baby.”

Now Simmons is shuttling between the state capital at Springfield and his North Side district in Chicago in what he calls a “perpetual campaign.” He lives in the Uptown neighborhood with his partner of four years.

“If you’re a vigorous lawmaker, a vigorous and progressive lawmaker, like I am, you feel like you’re always campaigning. You gotta keep talking. You’ve got to constantly be talking about your vision and your goals, right? And your values, and why you believe the things you do, and who’s behind you, right? And who in the community is impacted.”

Asked if the former president has given him advice on that or any other subject related to holding office, Simmons skillfully demurs, twice. He’s not looking for comparisons to another Illinois state senator from Chicago. After a string of legislative successes almost two years into his tenure, Simmons doesn’t have to.

“At the end of this term,” Simmons says, “I will have introduced and passed 16 pieces of legislation, and all of them have been signed into law.”

Among his accomplishments: legislation that allows pharmacists to prescribe PrEP; adding data collection requirements to the Support Equity and Racial Justice Act, including disability status, sexual orientation, and gender identity; a bill to eliminate the term “alien” from all Illinois statutory provisions; a law creating a pilot program enabling incarcerated juveniles to attend school remotely; a law strengthening lead mitigation procedures; and a commission addressing historic injustices among Black farmers, and more. The senator faces no serious opposition for the seat in his heavily Democratic district.

Among Simmons’ proudest achievements is the Jett Hawkins Act, named for a four-year-old Black student in Chicago who was suspended from school for braiding his hair.

“His mom braided his hair, he was excited to go to school, and his hair violated the school handbook, the dress code,” Simmons recalls reading online. “I call in my staff that night, and I said, ‘We gotta get a bill on this.'”

He met with Jett and his mom and told them: “I think we ought to make this illegal, right? It should just be the situation in Illinois, where you can no longer tell a Black child they can’t be in a school because they are wearing their hair in a way that is completely natural, and God-given, right? Braids, dreadlocks, corn rows, whatever it is. It’s time to turn the page on that ugly history.’ And that’s what we did.”

The governor showed up to sign the bill at a school in Simmons’ district, with Jett Hawkins watching. “People in the neighborhood were just like, ‘Mike, what is going on? What’re you doin’?! We love it!”

That day, Simmons was “there for it” because of a lesson imparted by his mother.

“When I was in fifth grade, a security guard looked at me and figured I was gay, grabbed me and threw me up against the wall. You know, assaulted me and called me a f***t. And then I went and told my teacher, and she shrugged her shoulders and said, ‘Well, maybe you are a f***t,’ in front of 40 students.”

Same-sex couples in Tokyo can now get domestic partnerships