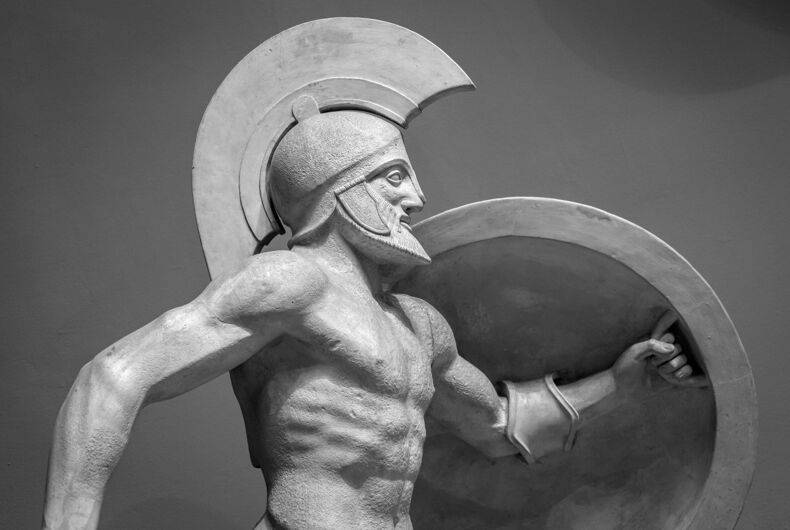 The Sacred Band of Thebes was ancient Greece’s savage gift to anyone still facing opponents of gays in the military today.

An elite military force, this platoon of egregiously out warriors absolutely mopped the floor with the ballyhooed Spartans – no small feat in the days of gory hand-to-hand combat.

Formed under the hypothesis that only love withstands the horrors of war, the Sacred Band was deliberately comprised of 150 gay or bisexual couples. At this point in history, warfare was an up-close-and-terrifyingly-personal affair. Drone strikes and sniper rifles, tools that put valuable distance between soldiers and their mortal targets, were centuries away. Ancient warriors had to viscerally carve up other men at close range…or worse, be carved.

This was appealing to military states like the famously brutal Spartans, whose social hierarchy was influenced heavily by battlefield body count. But in less warmonger-y cities like Athens (made up of fancy folk and artists) and Thebes (made up of businessmen and farmers), enlisted adults were not stoked by the prospect of becoming – or making – human meat skewers.

Desertion was thus a serious obstacle for many Greek armies, especially in agricultural centers like Thebes, which invested little in cultivating soldiers.

But after the Spartan army started menacing Thebes—which author James Romm details in the book, The Sacred Band—leaders proposed the state finally pour money into training and maintaining an elite fighting force. And they suggested purposely making the force as gay as possible.

The assumption was that an infantry of loving couples was less likely to run away when staring death in the face. To quote Theban leader Pammenes:

“A band that is held together by the friendship between lovers is indissoluble and not to be broken, since lovers are ashamed to play the coward before their beloved, and the beloved before their lovers, and both stand firm in danger to protect each other.”

Most historians agree that the ancient military veteran Gorgidas was initially granted Nick Fury status and a state-funded budget. He then set about recruiting 150 couples based on their athleticism and fighting skills. Recruits were housed together and paid to train in warfare, becoming some of the only full-time professional soldiers in the region.

Once trainees were adequately conditioned to join the band, they vowed immortal allegiance to their partner and unit in a formal ceremony at Thebes’ sacred temple.

Now, some breakdowns on the Sacred Band hyper-focus on its couples being comprised of one “masculine” top, and their “beloved” or “eromenos,” a younger and less experienced bottom. Queer sexual dynamics between mentor-lovers and their proteges were not only normalized across classical Greece, but also seen as “important” to military morale.

The Spartans, often heralded as the pinnacle of masculinity by conservatives who don’t study history, even used the erastes-eromenos structure as part of their famed agoge training program (remember this anytime you see a self-proclaimed “Alpha Male” calling his online fitness program The Agoge). Once a younger eromenos hit full adulthood, they would transition out of their existing relationship and become an erastes.

But “male eros”  (sensual love) in Thebes wasn’t limited this way. An army that’s 50% adolescents and 100% couples scheduled to break up within 5-8 years is too unstable to be a wise long-term investment. As such, it’s likely the majority of Sacred Band pairs continued coupling in one way or another for life. Many members had wives and even children in addition to their military partners.

The Sacred Band’s most heralded victory came under the leadership of General Pelopidas in 375 BC, at the Battle of Tegyra. Gravely outnumbered 3 to 1 by Spartans, the Sacred Band aggressively targeted the leaders of their opposition, successfully slaughtering enough to force a Spartan retreat. The victory put Greece on notice and fueled a decades-long rivalry between Sparta and Thebes.

The rivalry only intensified after a separate battle in which the Sacred Band’s marauding beaus murdered both Spartan kings in a single campaign. Brilliant historian Daniele Bolelli details these battles in an episode of Luminary’s “History on Fire” podcast.

In the end, it took an outside mega-force to finally shatter the Sacred Band. Macedonians Philip II and Alexander the Great wiped the unit off the map somewhere around 350 BC. The band fought so hard and so bravely that some had to be buried with weapons still embedded in their bones.

Philosopher Plutarch wrote that Philip was incredibly moved by both their skill and love:

“Philip was surveying the dead, and stopped at the place where the three hundred were lying, all where they had faced the long spears of his phalanx…mingled with one with another, and he was amazed. And on learning that this was the band of lovers and beloved, he burst into tears, saying: Perish miserably anyone who thinks that these men did, or suffered, anything disgraceful.”

It’s possible the Sacred Band was not the only all-gay fighting force, just the one with surviving documentation and a solid press package penned by Plutarch. Regardless, they left an indelible mark on Greece and remain a world-class reminder that love conquers both elite armies and bigoted nonsense.