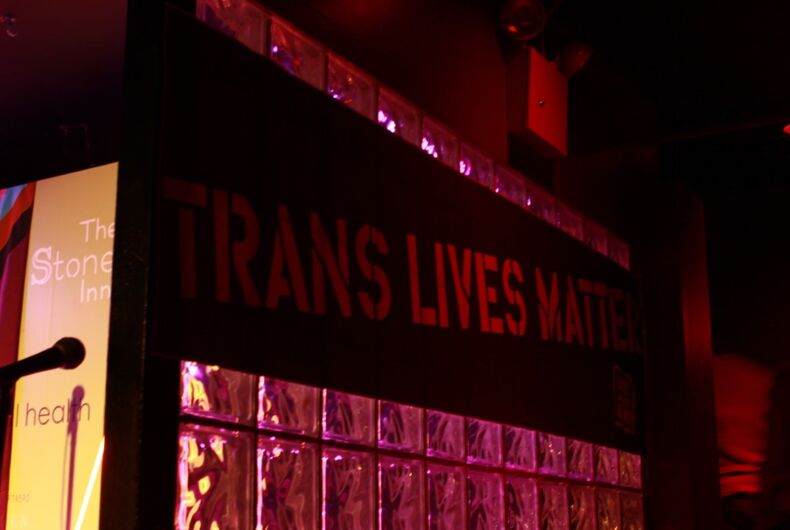 Transgender Day of Remembrance (TDOR) was commemorated throughout the nation yesterday. The day marks the end of Transgender Awareness Week where history, stories, joy, and grief are shared amongst transgender communities and allies.

Gays Against Guns (GAG) – an LGBTQ-inclusive direct action anti-gun violence group – has been hosting TDOR at the Stonewall Inn in New York City after the group’s conception in response to the 2016 Orlando Pulse Nighclub Massacre.

From 4 p.m. until 5 p.m. on Sunday, dozens of white-clad protesters grouped outside of the Stonewall Inn. They held the photo of each trans person killed at the hands of gender and gun violence as they have for years for all victims of gun violence in the United States.

However, this year is different. News broke all over the country on Sunday morning that a deadly shooting at LGBTQ Colorado Springs nightclub – Club Q – killed five patrons and injured 25 more the night before. Anderson Lee Aldrich, the 22-year-old grandson of California politician Randy Voepel, is identified as the gunman and is now in police custody.

News coverage of the massacre spread everywhere in conjunction with TDOR.

“Reporters wouldn’t be here if it weren’t for the shooting,” a patron could be heard saying as cameras disappeared through the exit. Stonewall TDOR commemoration happens in memory of the famous bar’s own LGBTQ history.

Shirts were strung above the multi-level bar reminding patrons “Stonewall was a riot.”

At Club Q the gunman was jumped and held by at least two patrons until police showed up. This action, this intervention, saved many lives from the hands that held the AR-15-style rifle, according to the New York Times.

“We condemn the horrific violence that shattered an evening of celebration for all in the LGBTQ community of Colorado Springs and our allies. Club Q offers our greatest gratitude to those who moved immediately to stop the gunman and prevent more loss of life and injury,” Club Q representatives said in an official statement.

Faces of numerous transgender people scattered throughout the walls of Stonewall. Their stories are enshrined with joys, dreams of becoming, and love. Attendees of the vigil hugged each other and tugged tissues from their bags. People sat in silence reading the stories of the more than 32 victims of transphobic violence, according to the Human Rights Campaign.

A note at the center of pictures of those lost read: “Since the year 2017, trans homicides have increased by 93%. 73% of these poor souls were killed by a gun.”

People choked for words as they discussed their feelings with LGBTQ Nation.

“When people look at trans people, and they don’t see a person,” said GAG member Sean Stefanic. “Trans people are people. They are amazing and they will save the world.”

Stefanic is from Oklahoma where he and his twin brother, Chris, were often the victims of homophobic bullying. Stefanic recounts a story where violent rumors about him and his brother spread throughout their high school. He recalls his mother coming home for lunch. On her return to work, she found her tires slashed by people that wanted to hurt her and her family.

It’s this life experience that brought Stefanic to NYC. He has vowed to protect his inner child and all children from the violence against them.

“I never want any child to go through this, and they do,” said the organizer as tears clouded his eyes. He cleared his voice. “No more guns on the street,” Stefanic said, wiping his tears.

Lorna Gottesman does something each year to remember the lives lost. One of the things she does is come to Stonewall.

Gottesman is older than every trans person being remembered, she shares.

“I want trans people to have access to be their authentic and true self,” said Gottesman. She looked over the images of her trans siblings.

“I think it’s important to fight for trans people and acknowledge their courage… to highlight the joy of trans existence.”

During the rally-turned-vigil, members of GAG spoke to a crowd of mourners and news cameras. LGBTQ activists like Marti Cummings planned to speak, but they were unable to attend. They sent a video message instead.

“And right here in New York City we have seen hate crimes happening,” said Cummings. “Even in Hell’s Kitchen, a bar, VERS, has had a brick thrown through its window three times this week alone.”