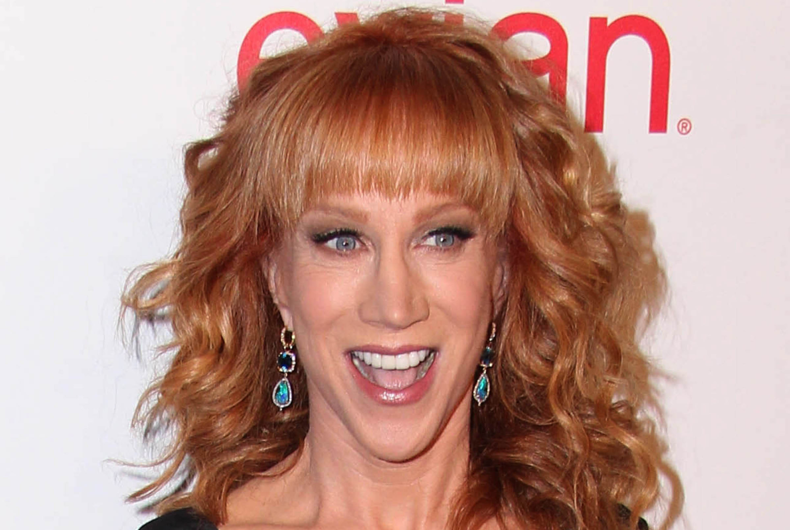 Kathy Griffin is the latest victim of Elon Musk’s new regime at social media giant Twitter and is responding from beyond the grave in protest.

Last week, the billionaire owner changed the identity verification requirements on the platform, igniting a revolt among verified users. Previously, a blue check mark next to a user’s display name was an indication the site had confirmed the user’s identity so that Twitter users would know that the person writing under, for example, Oprah Winfrey’s name is actually Oprah Winfrey.

Griffin and a raft of verified users were soon testing the new policy’s limits, and the new owner’s patience, by changing their display names to “Elon Musk.”

The 62-year-old comedian joined the protest over the weekend, making the switch to “Elon Musk,” while her user name – @kathygriffin – remained visible. Within hours, her account was restricted and then permanently suspended.

Got her already 🤣🤣.@Kathygriffin pic.twitter.com/4yDKVbqfQm

Soon after, the real Elon Musk tweeted: “Going forward, any Twitter handles engaging in impersonation without clearly specifying ‘parody’ will be permanently suspended.”

In a separate tweet, he added: “Previously, we issued a warning before suspension, but now that we are rolling out widespread verification, there will be no warning.”

But by 5 p.m. Hollywood time, Griffin was back on the platform speaking from the grave of her deceased mother’s account, @maggiegriffin. Griffin’s mom Maggie died in 2020, aged 99, but her daughter maintains the account.

By this morning at 7:30, Griffin’s dead mother was more loquacious: “Elon, this is Maggie contacting you from the spirit world to tell u… you’re a douchebag. This is not parody. This is the actual ghost of Kathy Griffin’s boxed wine loving mother saying I’m gonna get tipsy & throw my bingo cards at you.! NOT A PARODY. To the moon, a**hole.”

Star Wars’ Mark Hamill retweeted “#FreeKathy” with a thumbs up.

Griffin is just the latest user to get removed from the site. Former NFL player and LGBTQ ally Chris Kluwe changed his name to Elon Musk on Thursday and added “location: Hell,” plus job description “Twitter Complaint Hotline Operator” in the bio line, just like on the new owner’s account. Kluwe posted: “Gosh, if all these blue checkmarks started impersonating me to obliterate the power of my management it would be JUST LIKE a union strike, and I can’t be having that! It would TANK the value of my $44b investment REAL quick :(” Kluwe’s account was suspended soon after.

Sarah Silverman joined the protest over the weekend, using her “Elon” identity to reply to an actual Musk post declaring “Comedy is now legal on Twitter” with “I am a freedom of speech absolutist and I eat doody for breakfast every day.” Her account was locked hours later.

One Day at a Time actress Valerie Bertinelli dipped into the controversy, changing her display name to Elon Musk just long enough to tweet support for Democratic candidates in the one-time Democrat’s name, then quickly changed back. “Okey-dokey,” posted Bertinelli, “I’ve had my fun and I think I made my point.”

While Griffin was able to speak her truth to power from beyond the grave, the comedian risks getting her deceased mom’s account suspended, as well. The site’s “ban evasion policy” states: “Twitter reserves the right to also permanently suspend any other account we believe the same account holder or entity may be operating in violation of our earlier suspension, regardless of when the other account was created.”