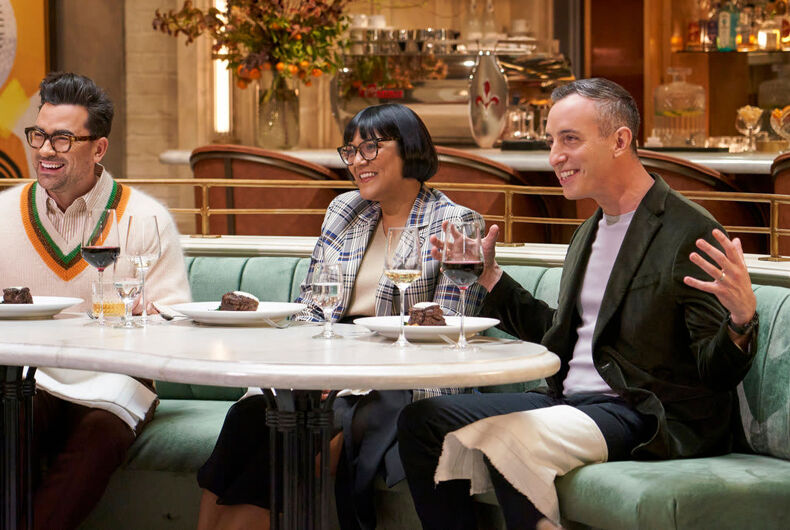 Brunch looks naked without a modifier: vegan, bottomless, or – to the horror of gay men running from bachelorette parties – drag. Add “reality show” to the mix as HBO Max debuts its new show, The Big Brunch.

The Big Brunch’s unquestionable star (and host, judge, and executive producer) is Dan Levy, bounding down from Canada to perch in colorful attire and toss out one-liners smoother than diner squeeze-bottle ketchup. Joining Levy as judges are bubbly Sohla El-Waylly of Bon Appetit fame and restaurateur Will Guidara, formerly of Eleven Madison Park.

Ten contestants clad in hipster aprons vie for a chance to win $300,000 at the end of the season. Winners in each episode earn the Best in Brunch title (perhaps a sly Levy family nod to dad Eugene’s mockumentary Best in Show), awarding them the opportunity to be judged first during the next episode.

Unlike its three-square-meal cousins, brunch is a raucous portmanteau of a meal when no one is in a rush (save the 90-minute window you have to guzzle enough mimosas and bloody Mary pitchers to sedate a horse). Brunch often comes down to the lowest common denominator, kitchens scrambling eggs to oblivion and serving them with thick slices of carbs to soak up the liquor. Brunch is leisure, decadence, and yet bemoaned as the downfall of American culture. Plenty of ink has been spilled on brunch disdain, so we look to heroes like Levy to lift it. The most outrageous horror judges can find is a store-bought bagel, which to any New Yorker (including this author), is a near-capital offense. El-Waylly, in fact, threatens to remove the supply of smoked salmon from the kitchen, exhorting chefs to make their own food.

In each episode, Levy provides a prompt (“create a brunch dish that represents your future,” is one), and contestants scurry around a spotless kitchen at their prep stations behind a partition that Levy dictates its opening and closing. Meanwhile, Levy, El-Waylly, and Guidara joyfully spill tea, share stories, and try egg creams for the first time. Their cheery camaraderie most closely resembles actual brunch as they nosh and judge on a mid-century modern plush forest-green banquette.

The unbridled optimism extends to the zeitgeist-y chef-testant cast, representing a very 2022 America. To wit: chefs profiled early in the season include a Haitian-American cookbook author and daughter of a New York cabbie, an El Pasoan who proffers plant-based food in a community/charity diner out of a church, and a lesbian who has a barn with her wife in the Hudson Valley. There’s also a gentleman named Mason from Montana who looks like an actual mason and is the son of actual hippies. He wears lots of plaids.

Jazzy montages allow us to peek into the chefs’ lives, tearing us away from the frenetic kitchen to watch them pet cows and stand under gently falling snowflakes with wistful visages. The back stories resemble Padma Laskshmi’s Taste of a Nation, as many chefs come from immigrant backgrounds in which food plays a central role in culture and community. A few tend toward the Pollyannish, each one-upping the other on how much good they can accomplish in a 45-second summary of their life’s work.

Back on site, the judges jump in when Levy commands the partition to be raised. Over one dish, he cracks, “A carb on a carb? I’m in!” He manages to get in several jokes about large portion sizes, which seems right for a meal so uniquely American. Guidara gets a little lost in Levy’s banter, but El-Waylly keeps it light with punchy jabs of her own.

The glossy, gleaming set leans somewhat sparse for a meal that isn’t a success without at least one broken glass or a friend running to the bathroom, crying. It has lots of soul and an enormous amount of representation, a rainbow of backgrounds, and so many queer contestants that I wouldn’t be surprised if RuPaul showed up as a guest judge. A la Great British Bakeoff, the chefs lift each other up, even serving each other’s dishes when it’s time to head for the judges. Luckily, Levy and the gang aren’t squeamish about flavors and don’t pull a Prue Leith and condemn anything non-Anglo as exotic. (They do take to Leith’s appreciation of liquor).

The show provides space for contestants to show up and tell their stories, a support mechanism for their backgrounds and socially conscious passions. They remind us that even at brunch, food is inherently political, even within the framework of an overhyped meal and an overstuffed TV genre.

The Big Brunch is a gooey stack of French toast: warm and soft, a bear-hug of a show that makes me want to cuddle up between Levy and El-Waylly and steal sips of their cocktails. And then maybe celebrate brunch just a bit more.

Herschel Walker asks what a pronoun is: “Pronouns? What’s a pronoun?”