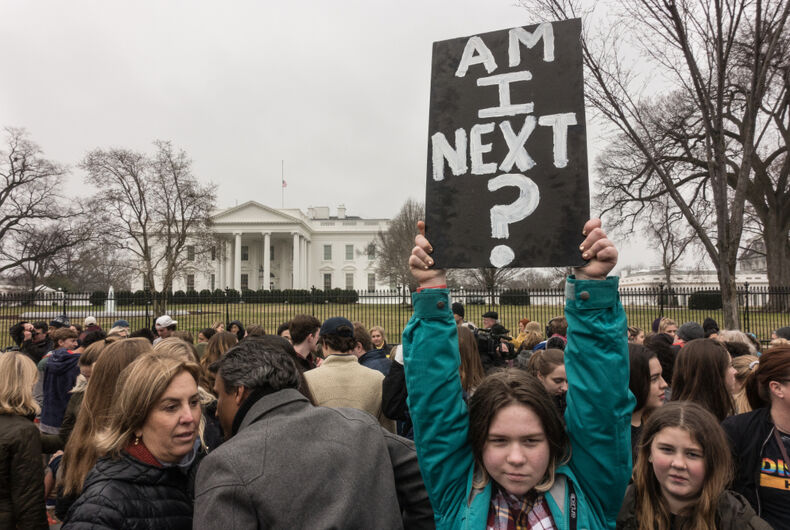 Another week in the United States means another mass shooting, this time at the hands of an alleged anti-gay, anti-trans 21-year-old NPR says “evaded” Colorado’s red flag gun laws after reportedly threatening his mother with a bomb. His alleged crimes in Club Q in Colorado Springs were so clearly motivated by bigotry that state officials threw the book at him nearly immediately with murder and hate crimes charges.

And yet, despite this absurd coward whose reported past bomb tinkering idiocy saw his neighborhood evacuated, this man-child was still allegedly able to a year-and-a-half later walk into a safe space for LGBTQ people the same weekend of Trans Day of Remembrance and open fire with what one law enforcement source told the AP was an AR-15 style gun.

Details are still coming out, but as of this moment, he reportedly took five lives and injured at least 18. It happened with a swift efficiency over a period that can be reasonably measured in seconds, the hallmark of assault weapons. The AR platform rifle is the quintessential assault weapon.

The agonizingly long massacre in an elementary school in Uvalde, Texas, stands as a horrific outlier. Most mass shootings occur in a matter of minutes or seconds before a gunman kills himself, is killed, or is otherwise subdued.

In Colorado Springs, patrons’ heroism ended this middling bigot’s brief ignominy in mere moments, beating him with one of his own guns according to CBS News and local authorities there.

According to Poynter, his primary weapon was one of 20 million AR-style rifles currently churning the bloodsoaked waters of a nation awash in over 400 million guns.

Putting aside the controversial type of gun he used, he easily navigated a legal system that seems reflexively coddling to the whims of troubled, hateful and mostly white young straight men.

In other words, no matter which way you slice it, this is not a situation that was impossible to prevent. Numerous policy failures have gotten us to this outcome.

Policy failures that got us here include letting the federal assault weapons ban sunset. In that case, the law “resulted in a significant decrease in public mass shootings, number of gun deaths and number of gun injuries,” according to a comprehensive analysis by the Northwestern University Feinberg School of Medicine.

We let this effective law die to cater to the whims of troubled, hateful, and mostly white straight men at the NRA and in the Republican Party.

Let’s be clear that this nation has done next to nothing after the Sandy Hook tragedy saw 26 people killed, 20 of them little children. “Never again” became “yet again” numerous times before Uvalde last summer made its sharp inflection point in history and took 21 lives, 19 of which were, like in Connecticut, little children. Yes, we passed the first gun legislation in decades last year. It’s not enough. Clearly.

And before you dismiss me as some anti-gun liberal caricature, understand that I’m a gun owner and grew up with guns in a household headed by a former U.S. Marine. Even so, it was entirely too easy for me to obtain my semi-automatic, high-capacity handgun. Likewise, I bought my tactical shotgun, a gun used exclusively for self-defense or to shoot other human beings, online with ease.

And, while I support the 2nd Amendment and all of our rights enshrined or implied in the U.S. Constitution, it remains inexplicable to me that everyday Americans can purchase military-grade weaponry – especially when that weaponry is so frequently used against babies, elderly Black churchgoers, and LGBTQ youth.

I remember the vigils after the Pulse nightclub shooting, which saw 49 people killed and another 58 injured. Like the grieving parents in Newtown, Connecticut, like President Barack Obama choking up in the White House briefing room announcing that tragedy, the LGBTQ community lamented the loss of the future for so many in 2016. How could this happen? We cannot ever let it happen again, we resolved.

Even so, our promises to those who died and those whose incalculable grief so pointedly recall those victims, “never again” has become “yet again” once more.

These are the bitter fruits harvested when a third of the nation seems to take perverse glee in being as nasty, hateful, and uncaring as possible. Would this third of the nation be properly marginalized and ostracized by political leaders on the right just as they were during the Civil Rights era when they were known as John Birchers and other kooks. They’d be a mere curiosity.

Instead, a comfortable political class of self-interested cowards encourages and emboldens them. And those of us in marginalized communities already with figurative targets on our backs, whether Black patrons of a grocery store in Buffalo or trans people dancing on a weekend night in a supposedly safe space, become literal targets.

It is not possible to be pro-LGBTQ and accept this unfettered callousness or stand idly by as this competition to be the most deadly, outlandish, and homicidal goes on. It is certainly not allyship to stay mum on the issue of guns now that multiple LGBTQ spaces and scores of LGBTQ people lay dead over the past few years alone.

Hate crimes against LGBTQ people are on the rise. And make no mistake: If they come for one letter of LGBTQ, they’re going to go down the line and get to yours even if you think the most vociferous bigotry doesn’t apply to you right now. Our trans siblings have been targeted most disgustingly by Republicans and it is entirely too commonplace for cisgender gay men to stay silent on this issue.

There is no longer acceptable silence on this issue, not that there ever was. And there are no both sides to this equation, either. It’s one side with one problem. The GOP has become a death cult for bigots and lunatics.

Either you’re with us or against us. And being against sensible gun safety measures or being tacitly in favor of a rabid political right targeting transgender people is decidedly not with us.

That is unless you want us to be killed in the spaces we fought to make safe.