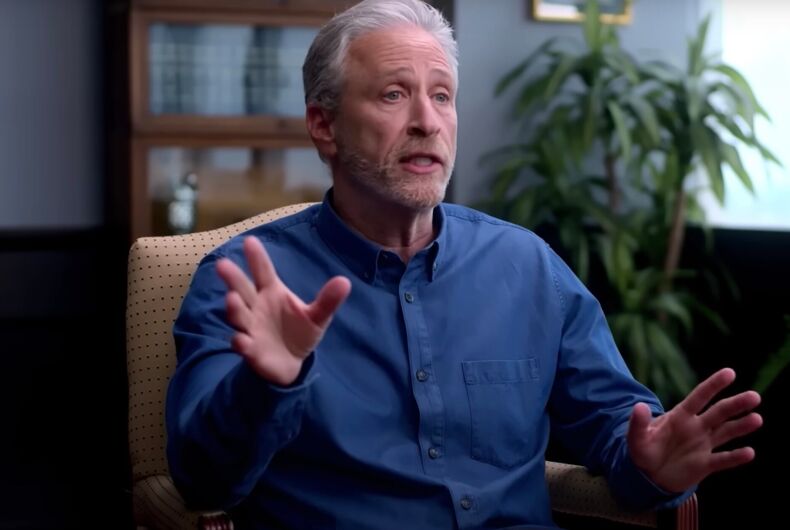 In the interview, Stewart continued to leave Rutledge almost speechless as he pressed her to explain why legislators would go against every mainstream medical association and decide they knew better than doctors and parents.

Rutledge told Stewart that for every expert that says gender-affirming care helps trans youth, there is an expert who says it doesn’t.

“But you know that’s not true,” Stewart replied. “You know it’s not for every one there’s one.”

And when she claimed that 98% of young people with gender dysphoria can ultimately “move past that,” Stewart declared, “Wow, that’s an incredibly made-up figure. That doesn’t comport with any of the studies or documentation that exist from these medical organizations. What medical association are you talking about?”

Rutledge couldn’t name one. She said it was in the state’s legislative history but couldn’t remember off the top of her head.

Stewart then tried to compare the issue to pediatric cancer to help her understand, asking which guidelines she would follow when it comes to this medical issue.

She said she would listen to her doctor but get a second opinion if she disagreed with him, adding that in the case of gender dysphoria and gender-affirming care, parents need to be encouraged to get second opinions.

But Stewart emphasized that “the state’s not saying ‘get another opinion.’ What they’re saying is, ‘you can’t.'”

“I’ve got some bad news for you. Parents with children who have gender dysphoria have lost children to suicide and depression. Because it’s acute. And so these mainstream medical organizations have developed guidelines through peer reviewed data and studies, and through those guidelines they’ve improved mental health outcomes. So I’m confused why you follow AMA guidelines and [AAP] guidelines for all other health issues in Arkansas, because we checked, but not for this.”

Stewart continued to lambast her and Arkansas legislators for believing they had more qualifications than doctors to decide the best way to protect children.

When Stewart again pressed her to share what medical organizations agree with her that banning gender-affirming care protects children, she couldn’t.

“We have all of those in our briefs and I apologize that I wasn’t prepared to have a supreme court argument today in front of you,” she said.

Stewart dedicated the entire episode, called “The War Over Gender,” to trans rights.

In his opening monologue, the he railed against the anti-trans rhetoric coming from right-wing pundits and politicians like Rep. Marjorie Taylor Greene (R-GA), rightwing pundit Ben Shapiro, Sen. Ted Cruz (R-TX), and Fox News’s Tucker Carlson. He even acknowledged his own “shitty and reductive jokes” about trans people during his stint on The Daily Show in the 90s and early 2000s.

“We are in a new dawn of gender and sex complexity, where those who don’t fit into a simple binary are meant to be seen with humanity,” Stewart explained. “Whatever discomfort we may feel in the changing norms of reality, myself included, it is no match for the discomfort and fear felt by those seeking acceptance.”

Explaining that anti-trans legislation in the U.S. has increased 800 percent since 2018, Stewart wonders, “What could justify this unprecedented urgency? Did trans people storm the Capitol? Did they steal classified nuclear intel from the White House and keep it in a humidor in Florida?”

It’s similar to what Stewart said to Rutledge.

“You’re making it sounds like a nine-year-old walks into a doctor’s office and says, ‘Give me some testosterone,’ and the doctor goes, ‘Oh thank God because we were wanting to create an army of transgenders because we’re crazy.'”

The entire episode is available for free on Apple TV+.