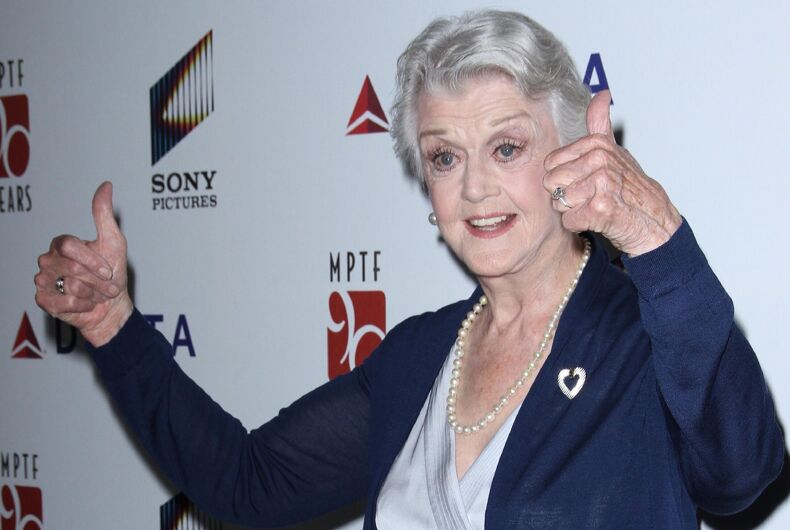 Ever since beloved actress Angela Lansbury died earlier this month at age 96, fans and colleagues have been sharing stories about her – the times they saw her perform live; their favorite Murder, She Wrote episodes, all the actors she helped along the way.

Writer and filmmaker John Waters has a different memory than most.

In his 2019 book of essays, Mr. Know-It-All: The Tarnished Wisdom of a Filth Elder, Waters wrote that he once saw Lansbury “checking out the scene” at a notorious New York sex club called Hellfire.

In a chapter entitled “One-track mind,” Waters described Hellfire as a “dungeon-like sex club” beneath Ninth Avenue that catered to “gay and straight perverts alike,” some “mixing together” and others “just plain voyeuring like happy sex tourists.” Built underground around an old subway platform, the club was “all the rage for a while,” he wrote.

During Literati’s event, interviewer Sam Krowchenko said that “as someone who was raised on Murder, She Wrote,” Waters’ disclosure that he saw Lansbury at Hellfire “stopped me in my tracks.” He asked Waters what he remembered about that night.

Waters put Lansbury in the voyeur category. He said it was in the years before the AIDS epidemic, a time when all kinds of people visited New York’s sex clubs.

“Everybody went. She wasn’t doing anything,” Waters said. “It was in Hellfire, and Hellfire was a straight gay bar [where] people had sex. You would be standing there talking about the new novel of Alain Robbe-Grillet, and a [penis] would come through a glory hole and — ha ha ha — then you just move down” to a different location in the club.

Waters said Lansbury is one of many well-known people he saw at Hellfire.

“I saw her there but [with] a whole bunch of people,” he said. “You went slumming there. I mean, Warhol would go there. Truman Capote. People would go there. You could not have to participate. You could go there. You might be sitting there talking to somebody and look down and someone’s licking your shoe. You just kick them away. But then they like that so then you had to say ‘Thanks!” and then they would go away. But it was a bar that you can’t imagine. I saw lots of celebrities there.”

In a career that spanned eight decades, Dame Angela Brigid Lansbury was a versatile actress and singer who played a wide range of roles on stage and screen, from mystery writer and amateur detective Jessica Fletcher on Murder, She Wrote, to a murderous baker in Sweeney Todd: The Demon Barber of Fleet Street, to a singing teapot in Beauty and the Beast.

One of the last surviving stars from Hollywood’s Golden Age, Lansbury was the maid in Gaslight, a 1944 classic about a woman who was being manipulated to question the truth, and a Soviet spy in 1962 in The Manchurian Candidate, considered one of the great villain roles in movie history. She spoofed her own reputation as a spy when she played Elfie van Donck, an international star who helps Napoleon Solo and Illya Kurykin on a 1965 episode of The Man from U.N.C.L.E.

Lansbury was born to an upper-middle-class family in Great Britain in 1925. Her father Edgar Lansbury briefly served as Mayor of the London borough of Poplar, and her grandfather George Lansbury was the Labor Party leader in the early 1930s. Queen Elizabeth II appointed her a Dame Commander of the British Empire during a 2014 ceremony at Windsor Castle.

But Lansbury wasn’t a prude. In 1945, at 19, she married Richard Cromwell, a 35-year-old man who reportedly later told her after they eloped that he was gay. They divorced after nine months but stayed friends until his death in 1960. She also gave many actors work by using her influence to help them get cast in Murder, She Wrote, which ran for 12 seasons. She received six Tony awards; six Golden Globes; a Laurence Olivier Award; the Academy Honorary Award from the Academy of Motion Picture Arts and Sciences, and two stars on the Hollywood Walk of Fame – one for film and one for television.

Waters, 76, made headlines this month when he confirmed that Village Roadshow Pictures has optioned his 2022 novel, Liarmouth: A Feel-Bad Romance, and that he will write the script and direct the film. Deadline called it a “high profile return to filmmaking” for Waters, whose last movie was A Dirty Shame in 2004.

Waters told Krowchenko that he later saw Lansbury at the offices of Criterion, the home video distribution company that has restored and reissued many of his movies, and didn’t mention Hellfire.

“I didn’t bring it up,” he said. “But she’s great. I was so happy to meet her…She’s a great, great lady. And she was naturally curious.”

Lansbury is hardly the only woman who went somewhere in public to satisfy her curiosity, Waters added.

But Lansbury had her limits, Waters said.

“The Toilet was the worst one, because they didn’t have any – except people,” he said of another infamous New York club. “So you tried to be careful, before you went, not to drink a lot because it could be awkward. I didn’t see Angela. I didn’t see her there.”