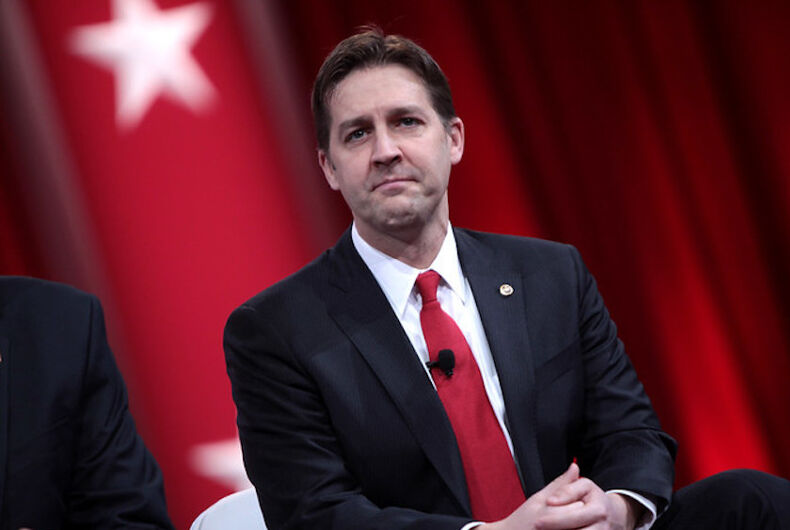 Almost a thousand students at the University of Florida showed up to protest a series of events promoting anti-LGBTQ Sen. Ben Sasse (R-NE) as the sole finalist to become the school’s next president.

Sasse has spoken out against marriage equality and has a long anti-LGBTQ record in the Senate. He has a zero rating from the Human Rights Campaign, and while Trump was in office, he voted in line with Trump’s position about 85% of the time.

Student protestors (and some faculty) interrupted a Q&A session with Sasse on Monday, chanting “Hey hey, ho, ho, Ben Sasse has got to go.” They also stormed a ballroom where he was conducting a session with university staff.

University of Florida students chant “hey hey, ho ho, Ben Sasse has got to go” in protest of him being tapped as the sole finalist for the UF’s president position. @GainesvilleSun pic.twitter.com/G7hBi8GvyB

After his final event, which was reportedly moved online, the video shows him fleeing in a police car while a student yelled that they didn’t want him there.

US Sen. Ben Sasse runs to a police car after speaking at the UF student and faculty forums. A protestor can be heard screaming “we don’t want you hear!”

Video was given to the @GainesvilleSun at the courtesy of a UF student. pic.twitter.com/dbAFSjsojJ

Students are upset both at Sasse’s conservative ideology as well as the fact that a new Florida law did not require the University of Florida to conduct a public search with open meetings for its new president.

First-year student R.J. Della Salle called it “the definition of undemocratic,” to The Gainseville Sun, adding that “Our selection for the person that’s going to run our university was made by a bunch of people who I’ve never seen or met. It makes me feel like my voice doesn’t matter.”

Queer junior Grace Smith called him “a coward” to the student-run newspaper, The Independent Florida Alligator, for only taking pre-approved questions at a student forum.

“As a queer student, I think his presence is a threat to my well-being here,” Smith added, “and if he actually becomes president, he won’t live a day in peace.”

“I just think that the president of a university should be able to be supportive of all the student body and I think that if he doesn’t agree and doesn’t support a specific group of students at our university, then that is a problem.”

While speaking at the school, Sasse claimed his conservative views in the Senate wouldn’t reflect how he’d govern the university.

“I’ve had political positions and policy positions that represent the views of Nebraskans. It’s a completely different job to have the job of president of UF. The president of UF’s job is to celebrate all of what’s going on in this community, and to be a storyteller and resource getter and salesman for it.”

He also said he would make the school “a place of respect and inclusion for all Gators.”

Before he was a senator, Sasse was president of a small Lutheran university in Nebraska called Midland University with less than 2000 students. Many students also believe this does not qualify him to run a massive institution like the University of Florida, which has over 34,000 undergraduates alone.

The school’s board of trustees will vote on whether to approve Sasse on November 1.