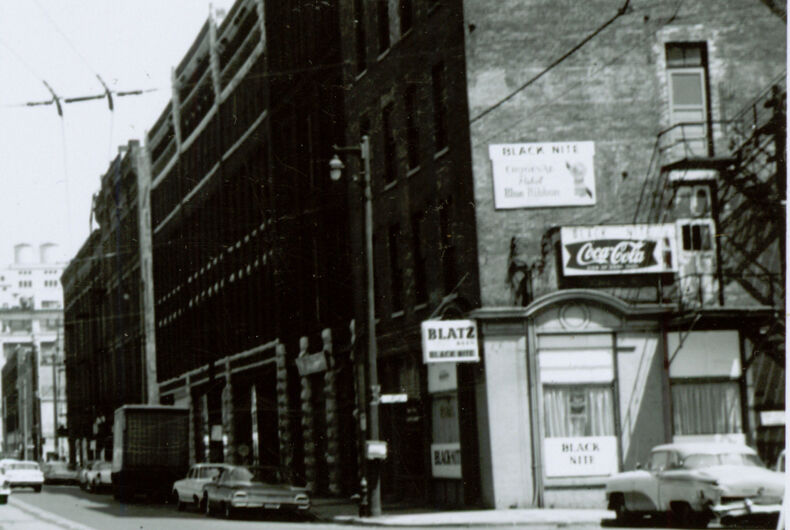 “We didn’t start anything, but we sure as hell finished it.”

That was self-described “queen” Josie Carter’s recollection of the night of August 5, 1961, when Milwaukee’s Black Nite gay bar rose up against a mob of Navy-enlisted men in what would become the first recorded uprising of LGBTQ people in the U.S.

Eight years before the Stonewall riots, Carter convinced the bar’s patrons to fight back after a group of sailors was refused entry and vowed to return in greater numbers. The ensuing confrontation came to be known as the Black Nite Brawl.

In the aftermath, one serviceman and two patrons were hospitalized, while three of the Navy men were charged with disorderly conduct. Another dozen who “joined in an invasion” of the bar were sought by police, according to contemporary accounts in the Milwaukee Journal.

At a hearing on October 5th, the Milwaukee County Landmarks Committee set in motion a designation to honor the since-demolished tavern as a Historical Landmark.

“There are still a large number of Wisconsinites — even LGBTQ Wisconsinites — who have no idea that something historic and significant happened at the corner of St. Paul and Plankinton sixty years ago,” Michail Takach, a historian with the Wisconsin LGBTQ History Project told LGBTQ Nation.

“This entire experience has been a testament to the importance of studying hidden history and reconnecting communities with heritage they never knew they had.” Takach interviewed Carter about the historic night prior to  her death in 2014 at 73. He also lobbied for the landmark designation.

The Black Nite Brawl began when a group of Navy trainees showed up at the bar, which operated under paid police protection, on a dare. When they refused to pay or sign in, a fight ensued. Carter later recalled to Takach that she heard what was happening and went outside in her robe with a beer bottle in each hand, “ready to knock some heads.” After one of the sailors was injured and they vowed to return to “clean the place up,” according to the Milwaukee Sentinel, Carter took the lead preparing to do battle.

Some closeted patrons feared arrest, Carter told Takach. The summer before, police beat a man to death in a nearby cruising area, and trans women were regularly stopped by cops for violating anti-crossdressing laws. Milwaukeeans at the time were required to wear at least three items of clothing that matched their sex.

“And Josie’s like, ‘Who cares if you get arrested? It’s time to stop running and hiding, because this is never going to end otherwise,’” Takach recalled to NBC News.

Two hours after the initial altercation, the doors swung open on a packed bar and 10-15 sailors “started to tear the place apart,” according to employees at the time. 75 LGBTQ patrons fought back, with Carter leading the charge. One man called her a homophobic slur, Carter told Takach, so she “popped him” and he dropped.

“I’ll never forget that as long as I live,” she said. “He started it, but I stopped it.”

“This is a remarkable story for a trans woman of color to have changed history the way she did, especially because she exhibited throughout her life so much Midwestern modesty that no one would have ever guessed that she really did this,” Takach told NBC News. “It does show that when people take a stand regardless of the risks and consequences, they can change history.”

After the Black Nite Brawl, “Gay people knew where to go for the first time to find each other,” said Takach. By 1969, Milwaukee counted a remarkable 36 LGBTQ bars among the city’s taverns.

According to Takach, the event “triggered a cultural awakening.” By 1982, Wisconsin became the first state in the nation to bar discrimination based on sexual orientation in employment and housing.

The Milwaukee County Historical Society board will not make an official decision on the bar’s landmark status until November, but the chairman of the Landmarks Committee told the Milwaukee Journal Sentinel that “it’s going to happen.”

When it does, the bar will become the county’s first ever LGBTQ landmark.

Elvira says Madonna hit on her girlfriend “a long time ago”