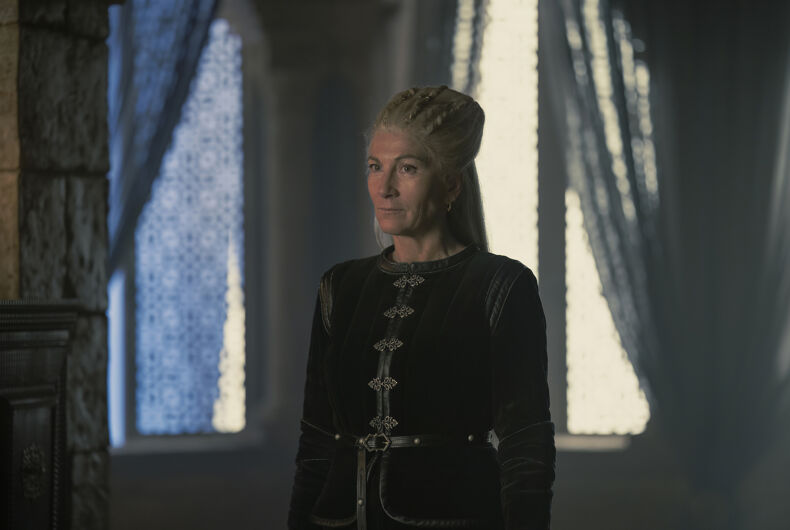 On last night’s House of the Dragon, Princess Rhaenys—a.k.a. the Queen Who Never Was—delivered a major flex that has us genuinely wondering what would happen if all PFLAG moms got an actual dragon along with their rainbow pins.

In the end, though, with the help of the disillusioned knight Ser Arryk Cargyll (Elliott Tittensor), Rhaenys manages to escape King’s Landing astride her dragon Meleys. But not before busting up Aegon’s coronation and scaring the living bejesus out of Queen Alicent (Olivia Cooke) and her allies in an epic show of power and restraint that has Twitter firmly on Team Black.

SHE IS A LEGEND, SHE IS A ICON, SHE IS THE MOMENT #HouseOfTheDragon pic.twitter.com/EAgVOoZ5b2

"Fuck you all." #Rhaenys #HouseOfTheDragon pic.twitter.com/rDZe6LDVvZ

Of course, anyone who has been paying attention to House of the Dragon has probably already picked up on the fact that Rhaenys is a force to be reckoned with. She’s been through it this season! Literally, in the first scene of the entire show, she’s passed over for the crown in favor of the ineffectual Viserys because she’s a woman. Later she loses both her adult children—first her daughter, who has her own dragon burn her alive as she’s dying in childbirth; then her gay son, Laenor, who fakes his own death so that Rhaenyra, his wife, can marry her uncle Daemon (Matt Smith). Most recently her husband, Corlys (Steve Toussaint), has been critically injured and there’s some…awkwardness about whether Rhaenyra’s son—who is definitely not Leanor’s legitimate kid—should be allowed to inherit their family seat.

All the while, Rhaenys has been quietly simmering on the sidelines, occasionally dropping some hard truths about women and power and patriarchy to both Rhaenyra and Alicent, and generally seeming like the smartest, least awful person in any room. Back in Episode 5, she even seemed to begrudgingly accept Leanor’s “true nature,” even as he and Rhaenyra agreed to their open-marriage-of-convenience. It’s not exactly the kind of acceptance that would get someone named PFLAG’s mother of the year, but in a franchise that routinely kills off queer characters to advance the plot—remember when Game of Thrones killed off Loras Tyrell (Finn Jones) literally on Pride Weekend in 2016?—we take what we can get!

In last night’s epic climax, she once again showed her unflappable poise, gazing stonily down from her dragon at her enemies—many of whom would 100 percent have used Laenor’s sexuality against him and Rhaenyra if given the chance. Recall, it was Alicent’s right-hand goon Ser Criston Cole (Fabien Frankel) who gay-bashed Laenor’s lover to death in Episode 5! And yet, even with the full extent of her power unveiled, Rhaenys showed that she’s better than all of them, declining to have Meleys roast Alicent and Aegon alive.

I mean, sure, she probably killed a lot of faceless peasants when her dragon burst through the floor they were standing on later, and that’s…not great. But still, Rhaenys on a dragon is the kind of energy we need from progressive moms at school board meetings when anti-LGBTQ activists try their clownery!