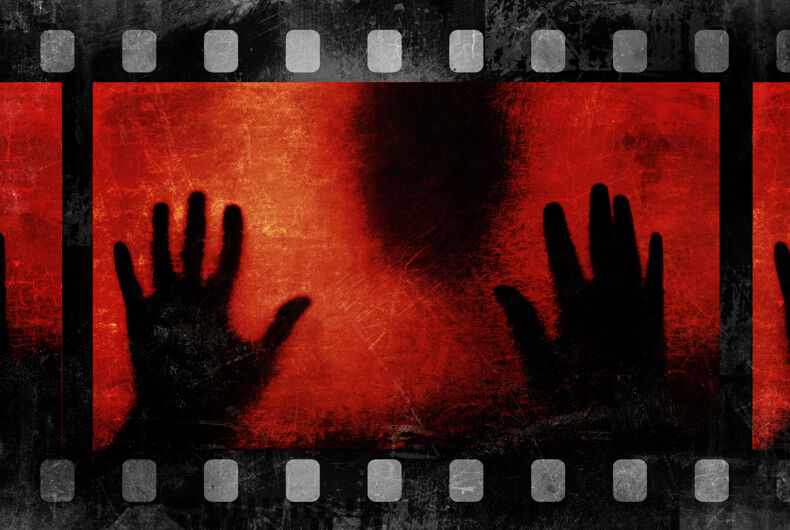 Spooky season is upon us, which means it’s time to crack out the horror films and decorate the house with pumpkins, cobwebs, and anything remotely ghoulish.

Of course, horror and thriller flicks are great all year round (provided you don’t watch them while home alone at 1 am), but there’s no denying that they just hit differently around Halloween.

And the only thing better than a horror film is a queer horror film, right? But they can be hard to come by.

Never fear, though. We have got your spooky season covered – check out our scary movie recommendations, dating back to the 1960s and some modern-day screamfests…

Now, we couldn’t start this list with anything other than the movie that propelled Megan Fox to bi-con status, could we?

Jennifer’s Body has become a real cult classic, to the point where Megan herself says it’s the proudest she’s ever been of a project.

Starring opposite Amanda Seyfried (this is no Mamma Mia!, let that be clear), Megan plays Jennifer Check, a troublemaking teen who becomes possessed and turns into a succubus after she is sacrificed to Satan. Jennifer seduces boys in her school through sexual activity before killing them, delivering a flurry of iconic lines along the way, not to mention that kiss with best pal Anita ‘Needy’ Lesnicki (Amanda). However, longtime friend Needy must stop Jennifer before she attacks her lover Chip.

Honestly, this film is one to dig out every year, plus it makes for amazing Halloween costumes.

If you think you’ve found a movie with the most plot twists, think again because The Perfection will surprise you on a minute-by-minute basis.

What’s so great about this thriller, besides the suspense, is how queerness is totally normalized and simply integrated into the plot like any heterosexual relationship would be. There’s no drawn-out coming-out plot or the residual trauma that typically follows. Showing queer relationships across genres is so important for representation and inclusion, and this film does it perfectly (pardon the pun).

Starring Allison Williams of Get Out fame (that’s how you know it’s going to be epic) and Logan Browning, The Perfection follows troubled musical prodigy Charlotte as she returns to her former prestigious music school. Upon discovering that new star pupil Lizzie has taken her place, the pair embark down a sinister path.

This film has so many twists and turns it’ll give you motion sickness.

Let’s be honest, the Scream franchise has a solid queer fanbase, and rightly so – the original Scream movie and characters were created by a gay man, after all. If you want one of the more recent films to sink your teeth into this Halloween, then the 2022 release is just so effortlessly queer.

Heroine Mindy Meeks-Martin (played by Jasmin Savoy Brown) is openly queer, and the first lesbian character for the film franchise, with the best part being that her sexuality isn’t her defining trait – she is more than that.

Because Scream (2022) focused mainly on sisters Sam and Tara Carpenter, Mindy’s character isn’t explored in too much detail, but Jasmin is set to reprise her role in the upcoming sixth installment in 2023. So, we’ve had a taste of what’s to come – let’s keep rooting for Mindy to avoid the wrath of Ghostface…

Stranger by the Lake

This gripping drama is certain to take you on a psychologically troubling ride.

Stranger by the Lake follows Franck as he falls in love with Michel, an attractive, potent, and lethally dangerous man, which is surely all your need to whet your appetite.

The Rocky Horror Picture Show needs no introduction, given the massive worldwide following that it’s garnered over time.

But, for the sake of a refresher, the film tells the story of a flat tire that leaves Brad and Janet stranded on a stormy night. They experience strange incidents when they seek shelter in a nearby castle and, well, the rest is history.

It’s no shock this movie grossed $226 million at the box office. And with a cast including Susan Sarandon, Tim Curry, and even Meat Loaf, to name just three, what’s not to love? The Rocky Horror Picture Show is a go-to for Halloween costumes for a reason.

Directed by Kurtis David Harder, this flick is very much a “not everything is at it seems” kind of vibe.

Spiral follows a same-sex couple who move to a small town so they can enjoy a better life together with their 16-year-old daughter. Well, their dream is short-lived, to say the least, as something sinister lies beneath the town’s picturesque surface.

If you enjoy movies that get you guessing, or questioning your own reality, dig out your popcorn and press play on this.

Much like The Rocky Horror Picture Show, Carrie (1976) is also a queer classic in its own right.

We’re all familiar with the plot – 17-year-old Carrie has lived a sheltered life until she discovers that she possesses telekinetic powers, which she puts to good use after being humiliated by her peers on prom night.

Carrie is a powerful story and has been hailed by many as an awakening or a pivotal moment in the realization of their queerness. In theory, Carrie’s entire story can be a queer analogy… growing up with strict parents, governed by religion, being bullied and ostracized, and frightened of your own sexuality. But then, Carrie realizes there’s something special about her.

Carrie White’s story is a great metaphor for what many LGBTQ people experience too (far less dramatic, of course), and it’s understandable why so many people feel a connection with the Stephen King classic.

Is it terrifying? Absolutely. But is it gay as hell? You bet.

The film follows Eleanor and Theodora, who are invited to stay with scientist Dr. John Markway and investigate the paranormal goings on at Hill House. Naturally, it all gets out of hand and makes for the perfect jumpy horror.

The gay part? Theo is beautiful and chic, not to mention a successful lesbian. The Haunting was released at a time when representation was a far cry from what it is today. Even in everyday society, conversations around sexuality were not so open and normalized, making this film ahead of its time and a nice reminder of how far we have come.

But don’t allow us to fool you into thinking this is something mushy. It’s terrifying. So sleep with the light on.