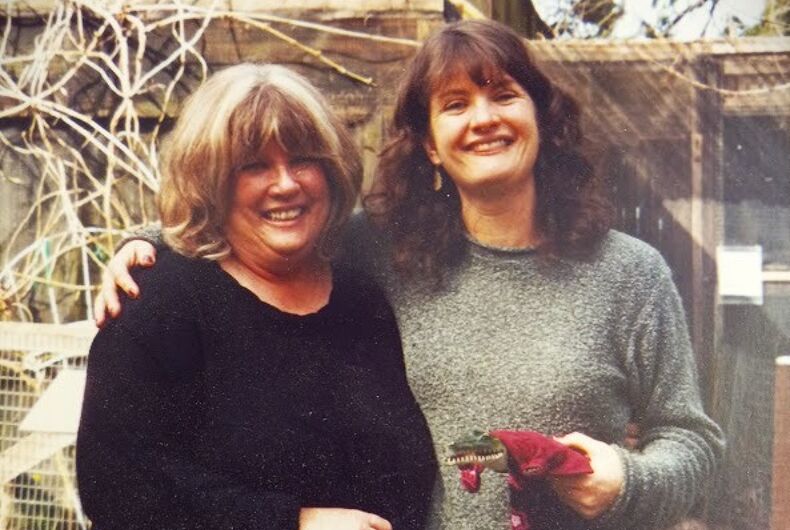 Melissa and her late motherPhoto: Jonathan B Smith

In 1970, Sandy Schuster, mother of four, and Madeline Isaacson, mother of two, met at a Pentecostal church in Seattle. They fell in love and subsequently left their husbands to live together with their kids. The church forced them out, and in 1972, their husbands sued for full custody of the children.

Determined to support Schuster and Isaacson, Seattle activists founded the Lesbian Mothers’ National Defense Fund (LMNDF). It became one of the first U.S. organizations to offer support and legal advice to lesbians grappling with child custody issues. Thanks to LMNDF’s work, Schuster and Isaacson retained custody of their kids.

My own mother wasn’t so lucky.

She came out in 1979 and fled our abusive father’s posh suburban house with my younger siblings and me. We moved into her new girlfriend’s duplex in a scrappy Southern California beach town. Mom had no job, no checking account, and no clue that she might lose custody of her kids. She knew nothing of LMNDF, so when my outraged father sued for full child custody, he won.

We grew up plagued by depression, baffled over why we couldn’t live with our beloved mother—former leader of my sister’s and my Brownie troop and hostess of the best kids’ birthday parties in town. I knew no other adolescents with lesbian mothers. I thought my siblings and I were the only ones until I discovered Abigail Garner’s 2004 book Families Like Mine: Children of Gay Parents Tell it Like It Is.

Only then did I begin to realize just how many lesbian mothers and their children had been forcibly separated in the Dark Ages of the 1970s and early 1980s. When documentarians Jody Laine, Shan Ottey, and Shad Reinstein found an essay I’d written for The Advocate about my mother’s experience and contacted me to appear in their film Mom’s Apple Pie: The Heart of the Lesbian Mothers’ Custody Movement, I jumped at the chance.

At last, here were the stories that had eluded me as a teen and young adult—stories similar to my mother’s and mine. It’s impossible to estimate just how many mothers came out and lost custody of their children during this era; stigma and shame kept parents and kids from telling the truth about how legal systems had ripped their families apart. But happily, some of these families remained together.

According to statistics cited in Mom’s Apple Pie, the Seattle-based Lesbian Mothers’ National Defense Fund provided assistance to over 400 lesbian mothers between 1974 and 1980. Other organizations followed suit—two San Francisco lawyers founded The Lesbian Rights Project in 1977, and two years later, urban gay dads who had been previously married to women launched the Gay Fathers Coalition. The former project became today’s National Center for Lesbian Rights, while the latter became the Family Equality Council—both of which serve queer parents across the country.

Most helpful to me was COLAGE, formerly known as Children of Lesbians and Gays Everywhere, affiliated with the Family Equality Council. Here, I found peers who spoke to our shared experiences of growing up with queer parents. Some, like me, remained in the closet about our moms and dads throughout middle and high school because of the repercussions of fraught custody battles. Others, enviable for their confidence and savvy, grew up out and proud, marching in parades alongside their parents.

Thanks to the efforts of these organizations and others, newly-out parents in 2022 seldom lose full custody of their kids, and many children grow up with a strong sense of in-person and online community among others with queer parents. My own daughter came out last year—a revelation worthy of celebrating both for her own powerful sense of self and for the vast network of support systems around her.

I remember Sandy Schuster and Madeline Isaacson and the queer parent activists of the 1970s with reverence. And I remember my own mother, gone since 2019, with admiration. She honored her identity and fought my father and a homophobic legal system alone, determined to be a kind and compassionate guiding force for my siblings and me her whole life.

Melissa Hart is the author, most recently, of Daisy Woodworm Changes the World and Better with Books: 500 Diverse Books to Ignite Empathy and Encourage Self-Acceptance in Tweens and Teens. Learn more at www.melissahart.com.