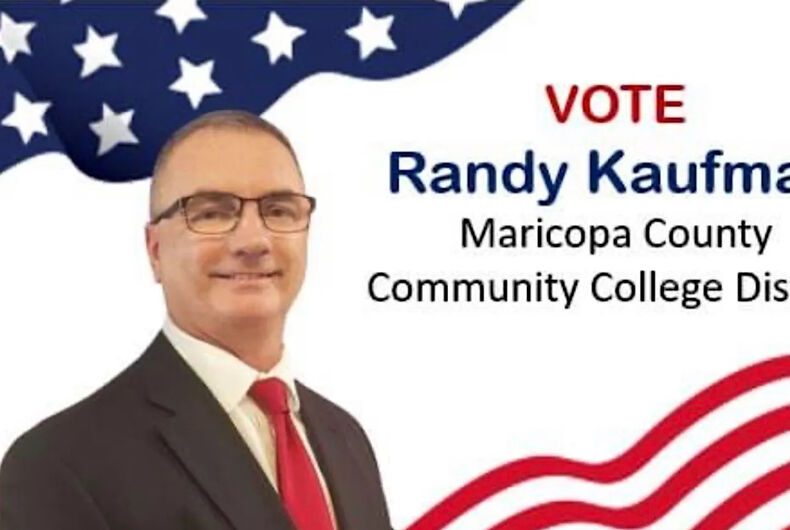 According to the police report, “[Kaufman] appeared to be looking at a cell phone in one hand.” The arresting officer stated that he “immediately became alarmed as I saw [Kaufman] had his pants down mid-thigh and was exposed showing his fully erect nude penis. [Kaufman] was manipulating his genitals in a masturbatory manner.”

A probable cause affidavit shows part of the conversation between the officer and Kaufman.

Officer: “I saw you had your phone out while you were doing what you were. What was going on with the phone?”

Officer: “When you look around here what do you see?”

[Kaufman]: “The child center but I didn’t notice it until you came up and I got out of my truck. Are you going to put that in a report?”

Officer: “Don’t you see how alarming that is? That there are children nearby, people passing on bikes and In cars where they can look and see what you are doing?”

The affidavit goes on to note that Kaufman said that he was “really stressed out” and had “a lot of things going on.”

Kaufman “spontaneously said to me, ‘I f**ked up. I’m really stressed,” the affidavit said, adding that he apologized to the officer.

A Trump supporter who has reportedly promoted the former president’s lie that the 2020 election was “stolen,” Kaufman made sure to tell the arresting officer that he knows Maricopa County Colleges Police Officers Association president Jim Hill. The union had previously endorsed Kaufman’s candidacy.

Though Kaufman’s Facebook profile has apparently been taken down, HuffPost reports that in a May post, he wrote that he wanted “our children protected [from] the progressive left.”

He has made numerous other extreme statements on social media.

“Nothing is more important than standing against the Godless/ progressive/ left-wing/ socialist/ marxist/ communist/ Democrat Party Movement to destroy America,” a post from July 9 says, according to Law & Crime. He also railed against “baby killing leftists.”

Several of his posts opposed vaccine and mask mandates as well.

KPNX reports that Kaufman could face a felony charge because of his proximity to a childcare center.

In a statement, Kaufman told the Phoenix NBC affiliate that he had suspended his campaign due to a “personal legal matter.” However, he has not formally withdrawn his candidacy. A spokesperson for the Maricopa county Elections Department said that it is too late to remove Kaufman’s name from the ballot.