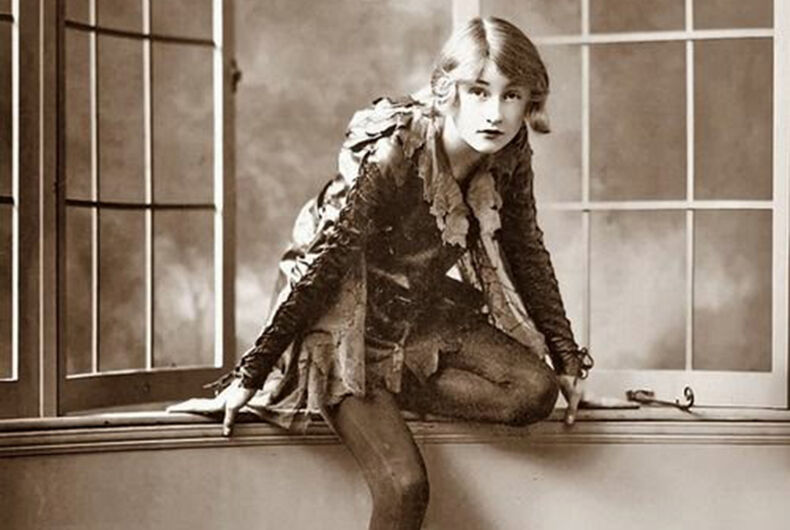 Violet Trefusis today, if she is remembered at all, is known for a slim volume of her published love letters. These letters are wild and lyrical in which she declares to her female lover: “I love you Vita because I’ve seen your soul.”

What is less commonly known is that Trefusis was also a writer and a remarkable lesbian pioneer who explored themes of androgyny. She was steadfast in her belief that there was nothing inherently ‘wrong’ with lesbianism.

She opposed the assertion made by lesbian Radcylffe Hall in her book, The Well of Loneliness that lesbianism was caused by a “genetic imperfection.” She did not see it as either better or worse than the heterosexual ‘norm’ but rather simply as a different form of sexuality, which was a radical view for the time.

Trefusis was born Violet Keppel on June 6, 1894. She was an English socialite, the daughter of Alice Keppel, who was the infamous mistress of King Edward VII. She was born into privilege; her family was an ancient one and the current queen consort Camilla is one of her descendants.

Trefusis did not live openly as a lesbian, nor did she hide her sexuality in life or in print. Her works are both subtle and vicious studies of repressed desire. Sadly, today her works are out of print, and she exists only in the words of others. She is thinly veiled as Sasha in Virginia Woolf’s Orlando, Eve in Vita Sackville-West’s Challenge, and Lady Montdore in Nancy Mitford’s Love in a Cold Climate. All are books that explore the nature of love and sexuality and are written by women who knew Trefusis.

When Trefusis read Orlando, she knew that Woolf’s lover, Vita, the love of her own life, had inspired its gender-shifting heroine. Woolf, herself, acknowledged that she drew heavily on their strange love triangle for inspiration. By the time Nancy Mitford was writing, Trefusis’s exploits had become widespread gossip and the two women shared a love/hate relationship.

It is an irony that Trefusis would not have appreciated, given that two of the above women spent half their lives hiding their connection to her, anxious to avoid being tainted by their association with her, as well as to avoid further scandal.

Trefusis’s life and works have become hidden and disabused by a society that has allowed her courage and passion to become lost beneath the words of the women in her life who accepted (or in the case of Virginia Woolf, failed to accept) a far less radical fate.

When Trefusis was about 4 years old, her mother, Alice Keppel, became the favorite mistress of the Prince of Wales, later King Edward VII. Keppel was a famous beauty and it seems unlikely that her mother’s husband, George, although named on the birth certificate, was Trefusis’s father. Trefusis would later write in a letter that she was “revolted” by the hypocrisy involved in her mother’s love affairs, yet at the same time she adored her and felt her life to be wildly romantic, wondering wistfully in her letters whether she would “ever squeeze so much romance into my life as she had in hers.”

She need not have worried. Socialite and author Vita Sackville-West became the undoubted love of her life, facilitating an almost violent sexual awakening that is reflected in the passionate letters she wrote to her paramour.

Right from the beginning, Trefusis saw nothing wrong with her love for Sackville-West – unlike the poet Charlotte Mew, whose lesbian desires tortured her, or Radclyffe Hall who sought to repress them.

Both women, who were alive at the same time as Trefusis, reacted very differently to her and their own homosexuality. Charlotte Mew viewed hers as ‘madness’ and ultimately would take her own life. Meanwhile, Radclyffe Hall would make her life a study of her ‘unnatural’ nature.

But Trefusis embraced her identity. She reveled in her physical relationship with Sackville-West. This was at the time a truly radical concept, one that inspired both the women in her life and that she explored in her later books, albeit through a thin veil of heterosexuality.

As teenagers, Trefusis and Vita spent time together in Italy where they pledged undying love. Unfortunately for Trefusis, it was not a love that society was prepared to accept. Back in London, Sackville-West became engaged to Harold Nicolson, who was gay, while Trefusis tried everything she could to make her lover jealous.

Matters came to a head when Trefusis went to stay with the newly married couple. Refusing to accept that her feelings for Vita were wrong, she once again declared her love. Vita reciprocated. Their love affair fully reignited, with Trefusis writing in her memoirs, “sometimes we loved each other so much that we became inarticulate, content only to probe each other’s eyes for the secret that was secret no longer.”

Their love affair also took on a literary angle, with Vita depicting the two women as lovers in the novel, Challenge. The book’s publication was blocked by Sackville-West’s mother and Trefusis was furious, arguing, correctly, that its exploration of the nature of love and passion was pioneering.

Sackville-West casts herself in it as the male hero, but she fails to conceal her identity sufficiently, and the book – which she dedicated to Trefusis, calling her “my witch” – is clearly a love letter to their lesbian desires. It would not be published in the UK until after both women were dead.

Deeply in love and seeking a way to be together, they fled to France, where Trefusis dreamt that Sackville-West would finally leave her husband once and for all and live openly with her. This was not as radical of an idea as it may have seemed. Lesbianism at the time was not even acknowledged, and intense female friendships were often overlooked – but only so long as at the end of the day the women returned to their husbands.

Trefusis and Vita took it too far. When they danced together in public in Paris, with scarcely a hair’s breadth between them and Vita in men’s garb, gossip about the nature of their relationship became rife. They became figures of ridicule and were widely abused in the press, causing intense pain and embarrassment to their families.

Unable to face the brewing scandal, Sackville-West ultimately returned to her husband. Under intense pressure from her mother, Trefusis married Denys Trefusis, a marriage that was little more than a slow-motion car crash. Trefusis realized that society would never condone her love for Sackville-West, but her marriage remained platonic.

Trefusis settled in France and wrote books that were commentaries on love, androgyny and desire. Her fourth book, Broderie Angalise, was a retelling of her and Sackville-West’s love affair, written in response to Woolf’s Orlando. Woolf by now was involved with Sackville-West and both fascinated and jealous of Trefusis, about whom Sackville-West could never be indifferent.

Woolf’s relationship with Sackville-West endured throughout the 1920s. They met at a party in 1922, when both were married to men and had no real desire to upset the status quo of their lives despite their undoubted passion for each other. Theirs was therefore a much safer affair than Sackville-West’s all-consuming one with Trefusis, whom she never could quite forget.

Trefusis and Vita’s relationship lasted in letters until Sackville-West’s death. The constant damage their relationship did to Sackville West’s state of mind and marriage is explored in her son,  Nigel Nicolsons’ Portrait of a Marriage.

Trefusis’s legacy today should be regarded as more than just a sidebar in the stories of others. She wanted, and desperately pursued, a life in which she didn’t have to live hypocritically.

She didn’t love men, she was not attracted to them, and she saw nothing wrong with that fact. With those beliefs, Trefusis was many years ahead of her time. Sadly for her, the time in which she lived was not ready, nor was the woman she desperately loved.

In a letter towards the end of life, Trefusis wrote, “across my life once word will be written, waste, waste of love, waste of talent, waste of enterprise.”

She feared correctly that the society that suppressed her life would do the same to her work and legacy. But her letters survive, and in them, evidence of her bravery and her remarkable pioneering view that there was nothing wrong with her love and desire for another woman. Her sentiments have inspired generations of women ever since.

Lauren Boebert says the Last Days are upon us