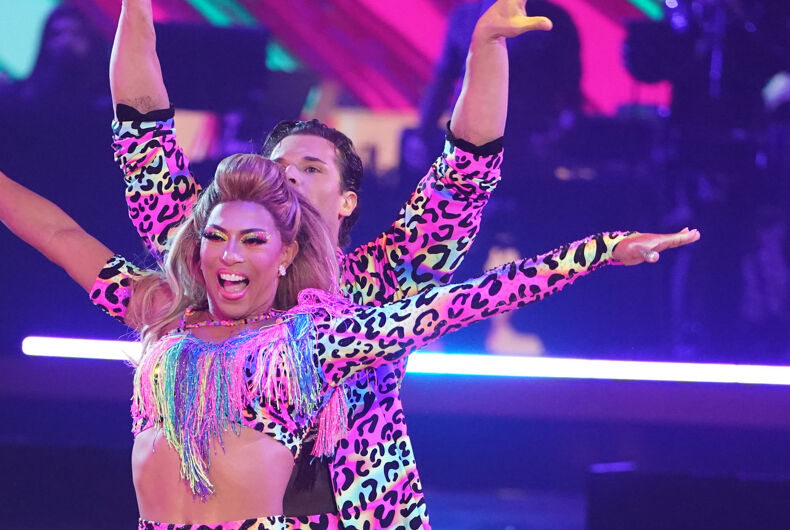 RuPaul’s Drag Race alum Shangela made her Dancing with the Stars debut this week, making history as both the first drag performer to ever compete on the series, and also as half of the show’s first-ever male same-sex couple. (When not performing in drag, Shangela, a.k.a. Darius Jeremy Pierce, identifies as a cis gay man.)

The We’re Here host and her partner Gleb Savchenko wound up in third place on DWTS’s 31st season premiere, after scoring 7s across the board for their performance of the salsa to the Pussycat Dolls’ 2008 hit “When I Grow Up.”

“My heart was racing like crazy but when the announcer guy started the intro, in my mind I went into full-on Beyoncé at the Super Bowl mode,” Shangela wrote in an Instagram post following the season premiere. “I wanted to deliver y’all a moment that was worthy of all ur love and support, and also show people that might not be familiar or loving of drag queens, that we belong, and we know how to turn the party!”

GLAAD’s Anthony Allen Ramos was on set and asked Shangela how competing on DWTS compared to performing a Beyoncé medley in front of the “Break My Soul” singer herself at the 2019 GLAAD Media Awards.

“This is way more nerve wracking,” Shangela admitted. “Listen, I wanted to be lovely for Beyoncé. I love Beyoncé so much, that was the moment that I got to honor her through me — it was her music. This is like training in a world that I’m not as familiar.”

“I feel like this moment is way bigger than me,” she continued. “It is a moment for inclusivity, representation, visibility and I wanted to give everybody — especially the gays, especially my fellow queens, my sisters — I wanted to give them a moment that I know we could all cheer for, and that’s what I feel we did.”

Shangela also compared performing on DWTS to her role on the HBO series We’re Here.

“Being a host on the show, We’re Here with Bob and Eureka, we get to go to places that aren’t as familiar with our community,” Shangela said. “This is something that feels a lot like that. But also, people say ‘Oh, what’s it like? Two men dancing together?’ Well, you know, I’ve been seeing two men dance together for a very long time.”

“To be a person that is a part of a new conversation for a lot of people in America, Canada, and Puerto Rico, that have not seen this type of partnership before, it’s great.”