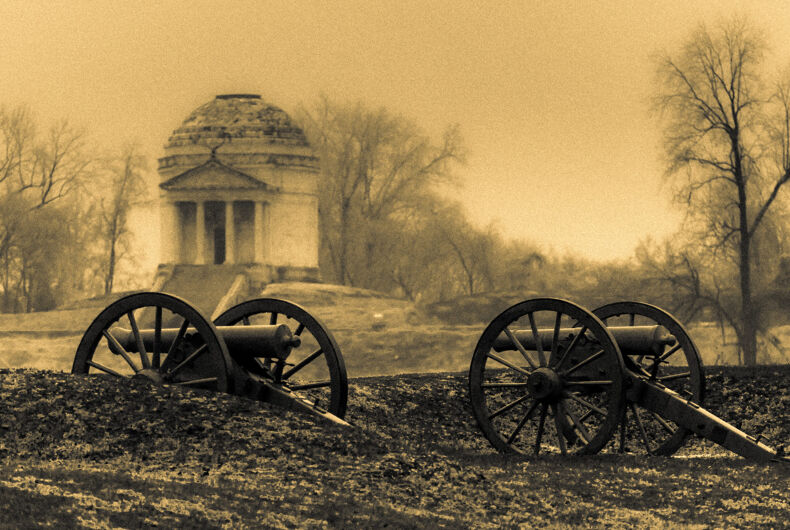 Whether in office or lounging at his Mar-a-Lago golf club, former President Donald Trump (R) has embraced the term “nationalism” in his “America First” policies. During his time in office, he conspicuously moved the extremists on the political right from the margins to the center of his MAGA movement. At a recent Democratic fundraiser in advance of the upcoming midterm elections, President Joe Biden (D) blasted the so-called “Make America Great Again” philosophy arguing that it is “like semi-fascism.”

Though many top Republicans pushed back against Biden’s representation of a significant extremist segment of their party, “Threats to Democracy” is the most important issue facing the country in a plurality of registered voters according to a new NBC News poll. It found that 21% of respondents placed “Threats to Democracy” in the leading position, followed by 16% for “Cost of Living,” and 14% for “Jobs and the Economy.”

This came on the heels of a survey conducted by the Southern Poverty Law Center with Tulchin Research indicating that 53% of Republicans and 39% of Democrats believe that the U.S. “seems headed” toward another civil war.”

“If there’s a prosecution of Donald Trump for mishandling classified information, after the Clinton debacle (referring to four U.S. people killed in Benghazi under Hillary Clinton as Secretary of State), there’ll be riots in the streets,” Senator Lindsey Graham (R-SC) told Fox News’s Sunday Night in America. Graham asserted this as a threat rather than as a warning without even the obligatory “but I hope it doesn’t come to that.”

The Southern Poverty Law Center survey also found support for the “Great Replacement Theory” referenced by the mass shooter who opened fire in a Buffalo supermarket this summer.

The theory, a racist trope that dates back to Reconstruction in the United States, has its origins in Europe. Replacement ideology holds that a hidden hand (often imagined as Jewish) is encouraging the invasion of nonwhite immigrants and the rise of nonwhite citizens to take power from white Christian people of European stock.

When white supremacists marched with torches in Charlottesville, Virginia in 2017, they chanted, “Jews will not replace us!”

Most historians agree that the US invasion of Afghanistan embodies our country’s “longest war.” While this may be true, arguably the American Civil War could be considered our “longest war.” It began on April 12, 1861, with the bombardment of Fort Sumter.

While a treaty of surrender was meant to suspend combat, no secession of hostilities or retreat from combat has transpired.

The United States have been anything but united – from the first footprints of European colonials who committed genocide and continuing through to COVID and the anti-vaxxers, Black Lives Matter, and the MAGA insurrection at the Capitol. Instead, the country’s history encompasses a perennial Civil War brought about more visibly during the Trumpian age.

“This is democracy’s most challenging hour since Fort Sumter,” argued Historian John Meacham.

Meacham’s words may be true, but not that a second American Civil War may be imminent. Instead, we are seeing the ramp-up of the continuing war that did not actually end in 1865.

A War between Liberal Democracy and Fascist Autocracy

Benjamin Franklin was one of the nation’s founders who attended the Constitutional Convention in Philadelphia to draft our now-famous founding document. At the age of 81, though the perennial optimist, he had no illusions; he thought it impossible to expect any group of people – no matter how wise or brilliant – to create a “perfect production.”

Even “with all its faults,” however, Franklin believed that this Constitution was far superior to any alternative that could possibly emerge. He had a warning though. As the story is told, when departing the Constitutional Convention, a group of citizens approached Franklin and asked him what kind of government had the delegates created.

His response: “A republic, if you can keep it.”

First, they come about after a prior conflict, for example, a previous civil war. Neither the issues, though, nor the direct fighters need not be the same as the old. Very often, a charismatic leader arises and articulates a narrative about past glory or grievance that aligns with “their ideology, political ambitions, or even flows from simple historical ignorance.”

Second, according to Toft, is a severe rupture in national identity:

“National identity is divided along some critical axis, such as race, faith, or class,” they write. “All countries have fracture lines and cleavages, but some divides are deeper than others. Even initially minor cleavages may be exploited by domestic or foreign actors committed to redistributing wealth or power.”

The third is a shift from tribalism to sectarianism. In tribalism, groups question if other groups adhere to or project the best interests of the larger general community.

In sectarian environments, though, the elites (economic, social, and political) determine that anyone who disagrees with them is unpatriotic and actively attempting to undermine society. To equate this to religion, some denominations bifurcate the apostates from the evil infidels. Currently, members of the MAGA Republicans (the apostates) portray the more mainstream Republicans as RINOs (Republicans In Name Only), the evil infidels.

The rise to sectarianism and authoritarianism develops by what Toft calls “a severely damaged information space.” With the rise of cable news networks in the 1990s, there has been an “ongoing shift from broadcasting to narrowcasting,” from professional journalism with a shared agreement of what facts are to “multiple competing versions of reality (‘alternative facts’).”

Barbara F. Walter, in her new book How Civil Wars Start, regrets that “We are closer to civil war than any of us would like to believe.”

“No one wants to believe that their beloved democracy is in decline or headed toward war,” she warns, but, “if you were an analyst in a foreign country looking at events in America…you would go down a checklist, assessing each of the conditions that make civil war likely. And what you would find is that the United States, a democracy founded more than two centuries ago, has entered very dangerous territory.”

Indeed, the United States has already gone through what the CIA identifies as the first two phases of insurgency: 1. the “pre-insurgency” phase, and 2. the “incipient conflict” phase. Only time will tell whether the final phase is fully activated: The “open insurgency” phase that began with the sacking of the Capitol by Trump supporters on January 6, 2021.

Things deteriorated so dramatically under Trump, in fact, that the United States no longer technically qualifies as a democracy. Citing the Center for Systemic Peace’s “Polity” data set that the CIA task force has found to be most reliable in predicting instability and violence, Walter writes that the United States is now an “anocracy” – somewhere between a democracy and an autocratic state.

U.S. democracy had received the Polity index’s top score of 10, or close to it, for much of its history. But in the five years of the Trump era, it tumbled precipitously into the anocracy zone.

By the end of Trump’s presidency, the U.S. score had fallen to a 5, making the country a partial democracy for the first time since 1800.

“We are no longer the world’s oldest continuous democracy,” Walter writes. “That honor is now held by Switzerland, followed by New Zealand, and then Canada. We are no longer a peer to nations like Canada, Costa Rica, and Japan, which are all rated a +10 on the Polity index.”

“A partial democracy is three times as likely to experience civil war as a full democracy,” Walter states. “A country standing on this threshold – as America is now, at +5 – can easily be pushed toward conflict through a combination of bad governance and increasingly undemocratic measures that further weaken its institutions.”

Others have reached similar findings. The Stockholm-based International Institute for Democracy and Electoral Assistance puts the United States on a list of “backsliding democracies” in a report in November 2021.

“The United States, the bastion of global democracy, fell victim to authoritarian tendencies itself,” the report said.

And a new survey by the academic consortium Bright Line Watch found that 17% of those who identify strongly as Republicans support the use of violence to restore Trump to power, and 39% favor doing everything possible to prevent Democrats from governing effectively.

We are on the doorstep of the “open insurgency” stage of civil conflict, and Walter writes that once countries cross that threshold, as the CIA predicts, “sustained violence as increasingly active extremists launch attacks that involve terrorism and guerrilla warfare including assassinations and ambushes.”