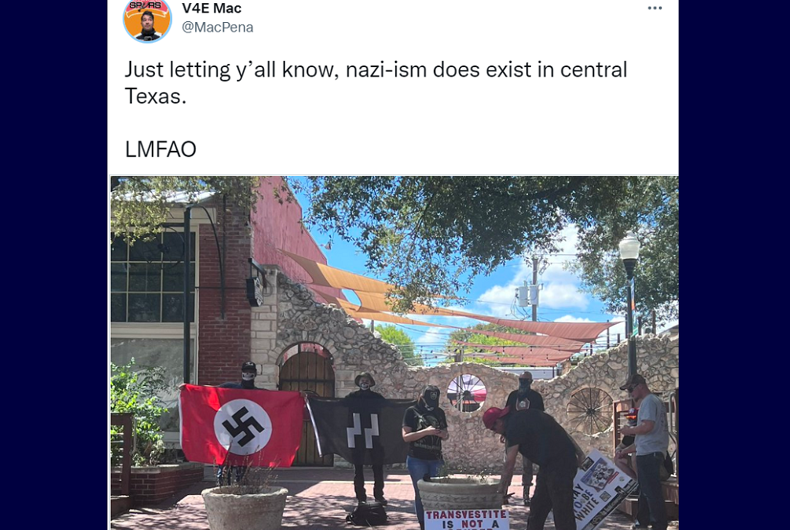 Queer military veterans faced down neo-Nazis and Proud Boys in Pflugerville, Texas last Sunday as the fascist groups held swastikas and transphobic signs across the street from the Hanover Draught Haus, a restaurant hosting its first-ever all-ages drag brunch. No children attended the event.

Two days before the event, the Texas Republican Party notified its followers about the event after through a public Twitter “alert” that falsely claimed that children there would be “exposed to” alcohol and “overtly sexual activities.”

Conservatives often claim without any evidence that drag shows seek to “groom” children for sexual abuse. In reality, all-ages drag shows usually feature no explicit sexual content. Most feature lip-sync performances and sing-alongs by performers in colorful costumes and makeup.

The Texas GOP’s tweet included an image of the event flyer which showed the name of the brunch’s host, Vegas Van Cartier, as well as its other drag performers: Amber Nicole Davenport, Brandi Williams, and Mechelle D’Marco.

ALERT: All ages drag show coming up in Pflugerville this weekend! Not only will children be exposed to overtly sexual activities but the event is advertised with alcohol sales. https://t.co/jx75cJ7Lhr #txlege cc: @Glenn_Hegar @txcomptroller pic.twitter.com/iu5gU6vQYd

The Republican party’s tweet also included a link to the event’s Facebook page. On the page, the event’s description noted that alcohol would be for sale and stated, “Show may contain Adult-Content. Parental Discretion is advised.”

In this case, the small group of neo-fascists protested the drag brunch for about an hour, Mac Peña and his brother Gen said. The two have previously stood guard at a trans rights protest, gay bingo events, and other Pride gatherings. However, they said they’ve never encountered such extremists as the ones who showed up this last weekend in Pflugerville.

“There was some crazy music going on that they were playing, very vulgar, derogatory language, really aggressive and against people of color and everything like that,” Gen Peña said, adding, “We are not going to stand down and we are ready to be the buffer between the hate.”

Mac Peña posted an image of the masked neo-fascists holding up a red flag with a swastika and a black one with two “SS” lightning bolts, signifying the Schutzstaffel (SS), the police state of Nazi Germany. Two men in the group wore a red hat and a necklace both bearing swastika symbols, Vice News reported. Two men carried signs stating, “Transvestite is not a gender. It is a mental disorder,” and  “It’s okay to be white.”

The first sign is correct: The word “transvestite” doesn’t refer to a gender identity. It’s an outdated early 20th century term that refers to a cross-dresser, often in a legal or psychopathological context.

This is just the most recent incident in which Texas conservatives targeted a drag event. In late August, anti-LGBTQ protesters tried to shut down an all-ages drag event in Roanoke, Texas, a town 17 miles south of Denton. However, the protesters were stopped by armed counterprotesters carrying rifles. In September, local conservatives shut down a Disney-themed drag event after the venue’s workers with threats.

Texas state Rep. Bryan Slaton (R) has previously said that he plans on sponsoring legislation that would criminalize the taking of children to drag performances, something he says is tantamount to child sexual abuse. Slaton hasn’t yet specified exactly what he means by “drag shows,” how they’d be defined in a bill, or how his bill would avoid violating Constitutional protections for free speech.

The Texas Republican party promoted a Texas drag event on Twitter to get people to protest it and shut it down. This is who showed up. It's anyone actually surprised? pic.twitter.com/hn5bLI1rpr