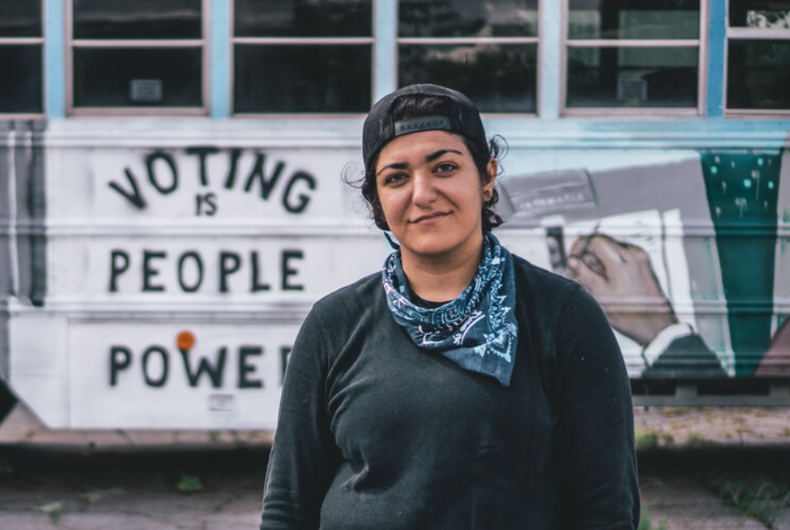 In Atlanta this week, the first queer Muslim elected in the state of Georgia came out for a second time — as nonmonogamous.

Liliana Bakhtiari, 34, who won their seat on the Atlanta City Council for the 5th District last November, acknowledged publicly for the first time that they’re in a nonmonogamous relationship with two women they live with.

Bakhtiari has been with their first partner, Kris Brown, for 10 years. The two kept quiet until now about the third member of the group, Sarah Al-Khayyal, whom they met two years ago.

Bakhtiari and Brown met at a gay bar in Atlanta in 2012, and the now-council member was upfront immediately about their aversion to monogamy. It was new territory for Brown.

“I was like, ‘That’s cool with me,’” said Brown, 33, a campaign consultant and fundraiser. “It was the first time that I had been with anyone who didn’t want to be monogamous. For me, it was kind of a relief as well to be like, ‘OK, I don’t have to be this person’s everything all the time. I can be as much of their life as works for us, and we can have this fluidity,’ and I really liked the feeling of that.”

Bakhtiari and Brown were a popular couple among their close-knit circle of friends, to a degree that shame dogged Bakhtiari about stepping out on their girlfriend. They wrestled with feelings “that I was a terrible partner, that Kris was only doing this for me, that I was keeping them home while I went out to have my cake and eat it too — all of these things that were very untrue,” they said.

A virtual nonmonogamy support group brought Bakhtiari and Al-Khayyal together. She works as a policy manager at a nonprofit and serves on Atlanta mayor Andre Dickens’ LGBTQ advisory board.

“For me, practicing nonmonogamy is a part of this greater unlearning and deprogramming of societal conditioning,” Al-Khayyal said. “Nonmonogamy for me doesn’t have to be having multiple partners. It’s also breaking down the platonic-romantic binary and being able to have these relationships that kind of exist in that gray area.”

Soon after Bakhtiari and Al-Khayyal began dating — they hit it off at roller-skating rink — Bakhtiari brought their new girlfriend around to meet Brown. Al-Khayyal moved in six months later.

Brown said the three see nonmonogamy as an umbrella term and prefer that label to polyamory. “There are many more ways to be nonmonogamous than there are ways to be polyamorous, and we invite and enjoy the fluidity of the term.”

Bakhtiari said their very public life had made it hard to keep their relationship under wraps, so they decided to be pro-active about their outing.

Brown chimed in, “This is the sort of thing that a political opponent or someone who has some ax to grind might pick up on and twist around and turn into something negative, and we want to claim it upfront, and say this is the best thing about our life.”

Unvaccinated people are 14 times more likely to get monkeypox