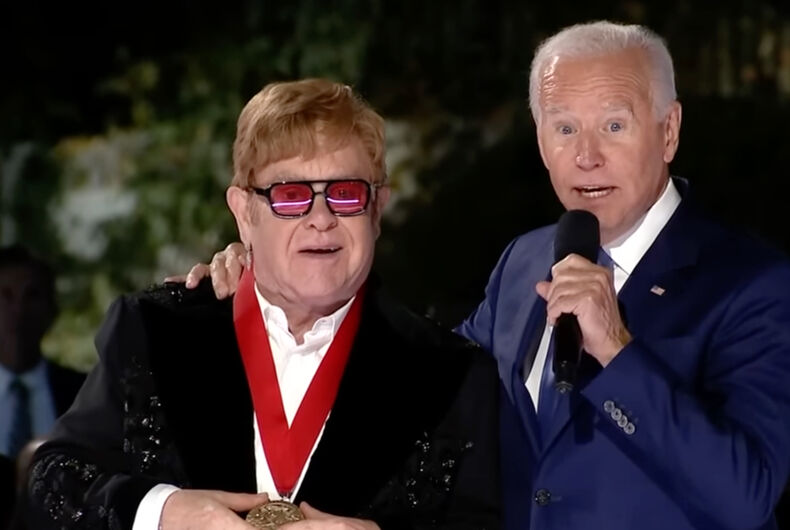 Following a performance of some of his biggest hits, Biden, along with First Lady Dr. Jill Biden, invited the singer back onstage to present him with the honor for his advocacy in the global fight against HIV/AIDS.

“The President of the United States awards this National Humanities Medal to Sir Elton John for moving our souls with his powerful voice and one of the defining song books of all time,” a military aide read. “An enduring icon and advocate with absolute courage, who found purpose to challenge convention, shatter stigma, and advance the simple truth – that everyone deserves to be treated with dignity and respect.”

“I think we surprised him,” the president told the crowd after placing the medal around the neck of the visibly moved John.

“I’m never flabbergasted, but I’m flabbergasted and humbled and honored by this incredible award from the United States of America,” the singer said. “I will treasure this so much, and it will make me double my efforts to make sure this disease goes away.”

“Your kindness — America’s kindness to me as a musician is second to none.  But in the war against AIDS and HIV, it’s even bigger.  And I can’t thank you enough.  I’m really — I’m really emotional about this,” he continued. “And thank you.”

Former first lady Laura Bush, House Speaker Nancy Pelosi (D-CA), and Transportation Secretary Pete Buttigieg and his husband Chasten were among the 2,000 guests at the event on South Lawn of the White House, along with teachers, nurses, LGBTQ advocates, and military families.

“We’re joined by so many people that … he’s set free to be themselves, to be treated with dignity and respect they deserve. Families and advocates in the fight against HIV/AIDS. A fight that he has led with sheer will, a​​​ fight for those lives lost and those lives we can save. Leaders standing up for equality of all people, no matter who you are, or who you love,” the president said in his introductory remarks.

During his performance, John gave a special shout out to Laura Bush, acknowledging former President George W. Bush’s Presidential Emergency Plan for AIDS Relief and asking the former first lady to give her husband a hug for him.

“President Bush accelerated the whole thing with his PEPFAR bill. It was the most incredible thing,” John said, noting that the fight to end the HIV epidemic is one of the few truly bipartisan issues in the U.S. today. “I just wish America could be more bipartisan on everything.”