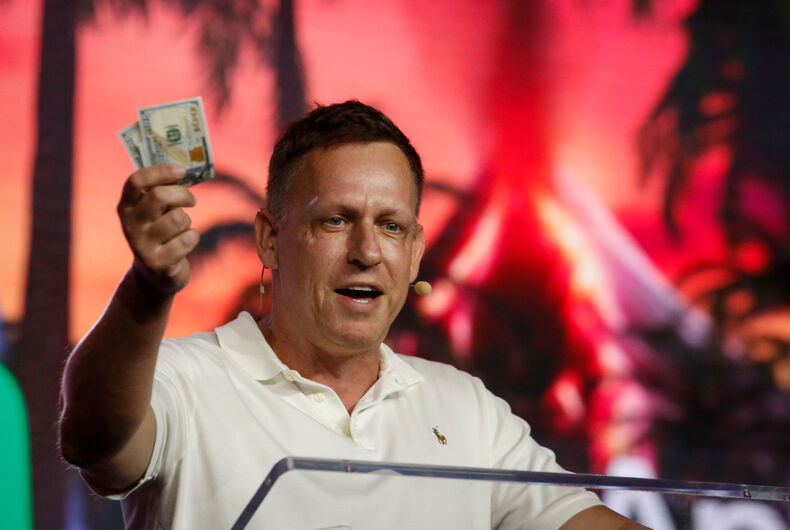 Gay billionaire Peter Thiel has always had, shall we say, unconventional political tastes. So it should come as no surprise that now Thiel is singing the praises of one of the nation’s most aggressively anti-LGBTQ governors as the future of the GOP.

In a speech at the National Conservatism Conference in Miami, Thiel called out Florida Gov. Ron DeSantis as offering the Republicans a corrective to the Democratic vision that Thiel despises.

“DeSantis in Florida is probably the best of the governors in terms of offering a real alternative to California,”  Thiel said.

Yes, Thiel is standing up for the man who gave us the Don’t Say Gay law, used the power of his office to punish Disney when it objected to the bill and who has a press secretary who calls LGBTQ supporters “groomers.”

Just to be clear, the reason why Thiel likes DeSantis so much is because he thinks the GOP doesn’t have an uplifting enough message to attract voters.

“The temptation on our side is always going to be that all we have to do is say we’re not California,” said Thiel. “It’s so easy, so ridiculous to denounce, but … should we maybe have more of a positive agenda?”

Apparently, vicious attacks on LGBTQ rights are exactly the positive messages that Thiel wants the GOP to send to voters.

Now, Thiel didn’t speak about DeSantis’ culture war against the LGBTQ community. Instead, the billionaire’s focus seemed to be primarily on money, or as Thiel put it, “growth.” Thiel singled out the Contract for America, the Republican’s 1994 election platform, as the kind of specific promise that would electrify voters. Contract for America was a high-level list of major legislative efforts Republicans would undertake if they won a majority that year. They did, although the Contract’s role in the GOP’s success that year is a matter of debate.

What Thiel doesn’t care for is the party’s current direction.

“We’re learning way too far into pure nihilistic negation,” he said at the conference.

How Thiel squares that belief with the two Senate candidates he’s backing this year, let alone DeSantis, is hard to understand. Blake Masters in Arizona and J.D. Vance in Ohio are much more focused on presenting themselves as election-denying, burn-it-all-down Trumpists than evangelists for a better future.

As for DeSantis, he gives every indication of being a strong man, not a democratic leader. But that might be exactly what Thiel likes about him. Thiel has never seemed all that keen on democracy, having said that freedom and democracy are not “compatible.” Thiel had no problem backing Donald Trump when no one else would. The only reason he dropped Trump was because of his incompetence, not his authoritarianism.

But Thiel doesn’t think DeSantis is completely without fault. Thiel had one complaint about the Florida governor: housing prices in the state are too high and climbing.