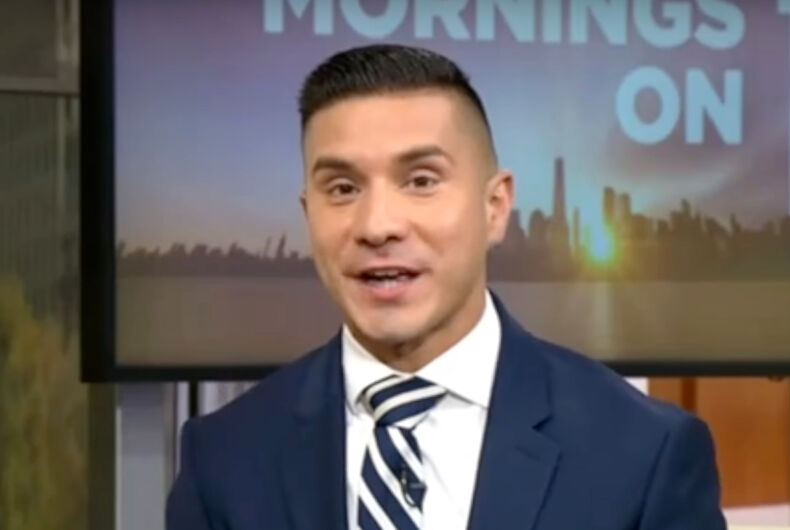 A gay meteorologist for New York’s Spectrum News NY1 says he was fired after screenshots from a nude video chat in which he appeared were sent to his employer as well as his mother.

“I am taking this opportunity to share my truth rather than let others control the narrative of my life,” wrote Erick Adame in a Monday Instagram post.

“Despite being a public figure and being on television in the biggest market in the country in front of millions of people five days a week for more than a decade and a half, I secretly appeared on an adult cam website.”

“On this site, I acted out my compulsive behaviors, while at home, by performing on camera for other men. It was 100% consensual on both of our parts.”

“I wasn’t paid for this, and it was absurd of me to think I could keep this private. Nonetheless, my employer found out and I was suspended and then termination.”

The Daily Beast reports that the two-time Emmy nominee is now petitioning a Manhattan judge to force the owners of adult internet forum LPSG to provide information about the person who leaked the screenshots. Adame intends to pursue legal action against the leaker, but according to court documents “is presently unable to do so without the information to identify” them.

According to court documents, Adame used LPSG’s video chat service in December 2021. “Unclothed images” of him were screenshotted by an anonymous user without his consent. That user then sent those images to Adame’s employer, Spectrum News, and his mother, “with the intent of harassing, annoying, or alarming” Adame and “tortiously interfering” with his employment relationship.

“Our client’s policy is to comply with lawfully issued subpoenas,” an attorney for Unit 4 Media, the company that owns LPSG, said. “Capturing and disseminating user content without consent violates our client’s Terms of Service and forum Rules which may result in a suspension or banning of the offending accounts.”

But, according to the court documents, Unit 4 Media claims it does not keep records that would identify users.

In his Instagram post, Adame apologized to Spectrum, his co-workers, audience, family, and friends “for any embarrassment or humiliation I have caused you.”

“But, let me be clear about something,” he wrote. “I don’t apologize for being openly gay or for being sex-positive—those are gifts and I have no shame about them.”

He also had a message for news directors across the country: “Please judge me on the hundreds, thousands of hours of television that I am so proud of and that my employers have always commended me for, and not the couple of minutes of salacious video that is probably going to soon define me in our ‘click-bait’ culture,” he wrote. “Think about your management of the newsroom—what have you overlooked, forgiven or ignored?”