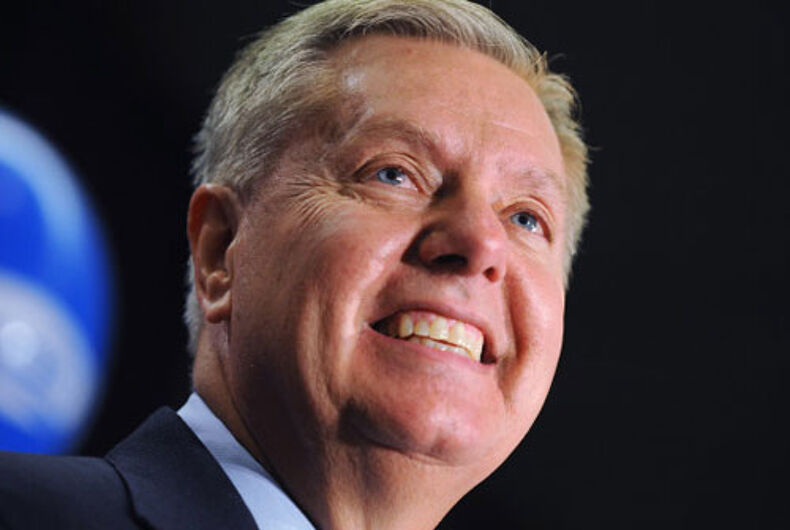 The senior senator from South Carolina is nothing if not confounding. He’s a political chameleon cloaked in a MAGA cap. He’s a two-stepping litany of surprises. Everybody’s got something to hate about Lindsey Graham. And he’s right where he wants to be.

Did he loathe Donald Trump, then become his greatest supplicant? Absolutely. Did he call President Joe Biden “the most incompetent president of my lifetime” and say he was “the best man” to lead the country? Of course. Does his schtick include asking his own preemptive questions and then providing the perfectly reasonable, Southern-fried answers? One hundred percent, all of the time. He’s glad you brought that up.

And one more thing, for the record? “I ain’t gay.” You could be forgiven for thinking otherwise.

Second: all those political boyfriends he’s torn through like a just-released Martha Stewart on Tinder. John McCain is at the top of the list. Joe Lieberman was the object of Graham’s affections for a time. Even Joe Biden was jetting around with Graham for a while. And now there’s Trump.

His latest love reveals his greatest love: proximity to power. The four-term senator spent a lifetime in politics getting to where the action is, from chasing ambulances around South Carolina to the 45th president around Bedminster.

Because that’s what an up-from-his-bootstraps, backwoods Southern lawyer does. Whether he knows all the lyrics to Helen Reddy’s version of The Night the Lights Went Out in Georgia is beside the point.

Graham “ain’t gay,” by whatever contorted definition that implies. He’s had plenty of gay moments, though. Here are the top 10 gayest, in order of appearance:

In 2010, Robert Draper of The New York Times reported in a profile of the senator that “during a South Carolina Tea Party rally this spring, one speaker created an uproar by postulating that Graham supported a guest-worker program out of fear that the Democrats might otherwise expose his homosexuality. (Graham smirked when I brought this up. ‘Like maybe I’m having a clandestine affair with Ricky Martin,’ he said. ‘I know it’s really gonna upset a lot of gay men — I’m sure hundreds of ’em are gonna be jumping off the Golden Gate Bridge — but I ain’t available. I ain’t gay. Sorry.’)”

In 2014, Dave Feliciano, a former police officer from Spartanburg, SC with no political background, joined three other contenders for Graham’s senate seat and signed a pact to support one another. At a news conference after the signing, Feliciano said this, “It’s about time that South Carolina says, ‘Hey, we’re tired of the ambiguously gay senator from South Carolina. We’re ready for a new leader to merge the Republican Party. We’re done with this.'”

In 2016, after Graham dropped out of the whack-a-mole Republican primary, he threw his support behind Jeb! Bush’s ailing campaign, and accompanied the former Florida governor on the campaign trail. Tim Miller, Bush’s communications director, recounts in his Republican tell-all Why We Did It how the three retired one night to a non-descript bar in midtown Manhattan, where Graham “pummeled” Bush to go after Trump hard. After his share of scotches, Bush slipped out and left Miller alone with Graham and his Chardonnay.

While Miller doesn’t speculate, it must’ve run through the bachelor-senator’s mind that he was sitting alone, late at night, wine glass in hand, with the only out, gay Republican operative in the business. And he was handsome, to boot. Graham continued to rail against Trump, plotting “what we could do to stop the racist menace.”

Sure enough, “for the next few weeks, I would get calls at random hours from blocked numbers. It would almost always be Lindsey with his latest idea for how to ensnare Trump.” And maybe Miller.

“I’m very disappointed in Lindsey,” Huckabee said of Graham’s comparison of House Intel Chair Devin Nunes to Inspector Clouseau of Pink Panther fame. “I sometimes wonder what uniform he puts on each morning when goes out to the field to play, and I’m not just talking about the partisan uniform.”

TMZ caught up with a solicitous Graham in 2018 at Reagan National Airport in Washington, DC to ask about his reaction to a tweet from Chelsea Handler that read: “If you’re wondering why Republicans took a sick day today, it’s probably because it’s #NationalComingOutDay. Looking at you @LindseyGrahamSC”

“She knows zero about me,” said Graham. “To the extent that it matters, I’m not gay.” He added: “I just think we’re moving on from that.”

And he did, sipping from a smoothie.

In 2019, a Trump rally erupted in chants of “Send her back!” when the former president called out Squad member and Muslim Rep. Ilhan Omar (D-MN). Graham claimed the crowd’s violent reaction wasn’t racist. Patti LuPone disagreed.

“Lindsey Graham you are a disgrace. On a personal note, why don’t you just bite the bullet and come out. You might just come to your senses.”

Lindsey Graham you are a disgrace. On a personal note, why don’t you just bite the bullet and come out. You might just come to your senses.

Calling Graham “hypocrisy on steroids,” the host of Real Time with Bill Maher revealed 24 Things You Don’t Know About Me about the senator in 2019, from “I once kissed Trump’s ass so hard I could taste Hannity” to “John McCain’s last words to me were ‘Let go of my hand.’”

In 2020, @SeanHardingXXX tweeted: “There is a homophobic republican senator who is no better than Trump who keeps passing legislation that is damaging to the lgbt and minority communities. Every sex worker I know has been hired by this man. Wondering if enough of us spoke out if that could get him out of office?” Harding claimed Graham was known among the group as “Lady G”.

A media frenzy ensued, with gay Hollywood fixer Howard Bragman weighing in, plus columnist Dan Savage, and Michelangelo Signorile, who reminded everyone of the dangers associated with “outing”. With a public figure like Graham, Signorile was for it.

While some of his colleagues danced around Graham’s predilections, Harding and friends couldn’t overcome the senator’s alleged use of NDAs for the alleged dates.

One sex worker did go public, anonymously, with an account of a date with Graham. A Reddit re-poster wrote, “I will never look at lady bugs the same.” You won’t either.

In 2020, while running for reelection to the Senate, Graham was asked by an audience member at a debate about the right to same-sex marriage: “My partner and I have been married for five years and we’ve been together for 22. What will the candidates do to ensure our rights are protected — the rights of the gay people, married in the state of South Carolina?”

“The law of the land by the Supreme Court is that same-sex marriage is now legal,” Graham replied. “I accept that ruling.” He went on: “I’ve tried to be tolerant. I’ve tried to understand that people have different life experiences. I do; I’m not a woman, I’m not a person of color. I listen, but I can tell you right now that when it comes to South Carolina, I think I’ve been an effective voice for who we are and to the gentleman, the law of the land is that same-sex marriage is legal and we will honor that.”

This year, Graham said he’ll vote against the Respect for Marriage Act when it comes up for a vote.