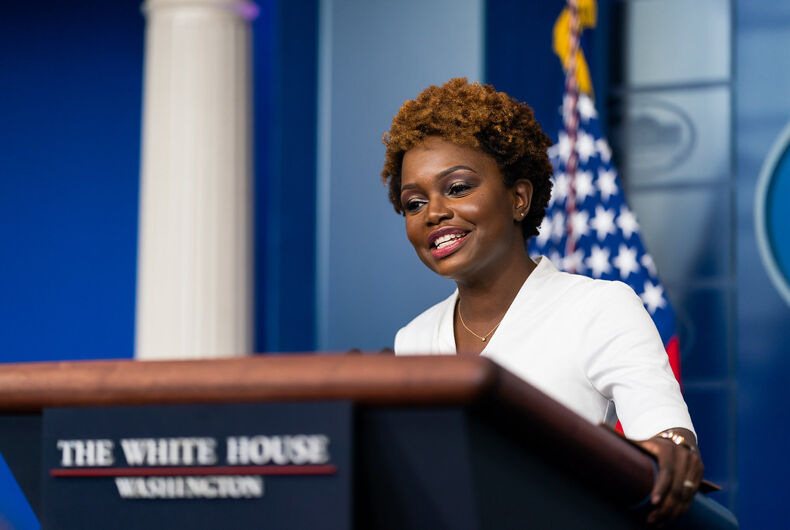 Out White House Press Secretary Karine Jean-Pierre had had enough of a Fox reporter saying that the Biden administration is allowing illegal opioids to wreak havoc in the U.S. and shut him down.

Fox’s Peter Doocy asked about Fentanyl, which is an opioid. Opioids caused over 100,000 deaths from overdose in 2021, according to the White House.

“We know how the fentanyl is coming into the country; it’s coming right across the southern border. The DEA administrator says so. So when is the President going to do something more to stop this?” Doocy asked.

Jean-Pierre noted that the U.S. government has tripled drug seizures at the border and that funding was increased for drug prevention at the United States Drug Enforcement Administration.

“Americans’ life expectancies are going down at a rate not seen in a century, and part of that is being driven by drug overdoses. So what is the President going to do to stop it?” Doocy pressed, as if she hadn’t already answered the question.

Jean-Pierre repeated that the Biden administration is getting more funding to stop drug trafficking, and Doocy again acted like she hadn’t answered.

“Three hundred overdoses,” he said, referring to how many overdoses he believes are happening per day in the U.S. from opioids. “This has been designed to target children. Drug cartels in Mexico want to kill American kids. What is this President doing about it?” he asked.

She again talked about drug seizures at the border, and Doocy barked “People are coming in. Fentanyl is coming in. People are dying.”

And Jean-Pierre had had enough.

“This is something that’s incredibly important to this President,” she said. “So to say that we’re not doing enough, Peter, is just falsely, categorically wrong, especially on a day that we are observing what needs to be done. And — and we have announced — DHS [Department of Homeland Security] has announced $80 million to prevent that.  So we are doing the work.”

Jean-Pierre was referring to how President Joe Biden proclaimed that this week is Overdose Awareness Week, showing that the administration is very aware of what Doocy was asking about.

“And here’s the thing, Peter, if — look, if Republicans want to help us stop overdose and stop our kids getting overdosed because of these dangerous drugs, because of these fentanyl that we’re seeing in the streets, we’re happy to work with them,” she continued. “But they’re not.”

“I’m moving on, Peter,” she said as he tried to ask another question, going to another reporter.