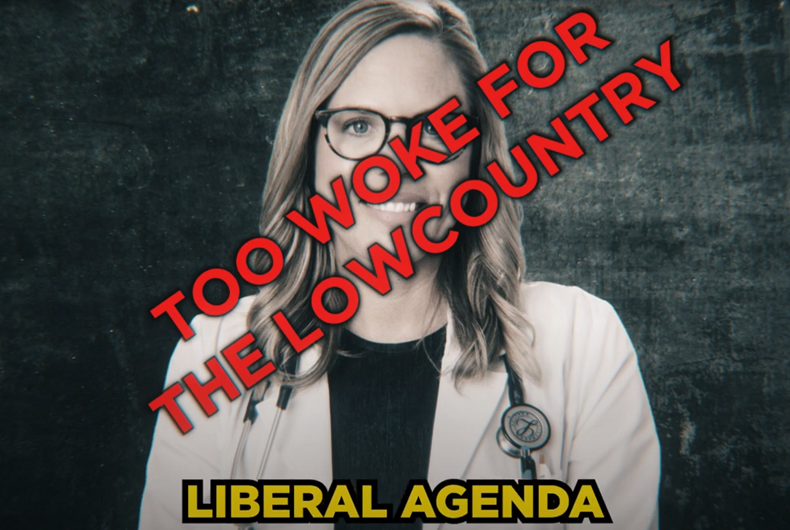 A pediatrician running for Congress as a Democrat in South Carolina, Dr. Annie Andrews, is speaking out after her opponent – incumbent Rep. Nancy Mace (R-NC) – accused her of supporting “child abuse” and gender-affirming surgery on young children. The attacks have led to threats and forced her to take unpaid leave from her job at Jenkins Children’s Hospital and increase security.

Mace, who has a history of anti-LGBTQ rhetoric, posted a video to social media that shows Dr. Andrews holding a small card with the words “Protect trans kids” and the transgender flag.

In another ad, Mace accuses Andrews of pressuring the state government into allowing gender-affirming care for children and “pushing hospitals to administer gender-changing hormones to children as young as four-years-old.” Hormone replacement therapy is not given to children that young.

“Lowcountry parents know better,” says the ad. “Our children are too precious to be indoctrinated with Annie Andrews’s bizarre agenda.”

Andrews said that Mace is just wrong – neither she nor the hospital she works at provides “gender-affirming surgery for anyone under 18.”

“What I support is evidenced-based medical care, with parental consent, for teens struggling with gender identity issues,” she said, adding that Mace was running a “shameful, dishonest, and pathetic gutter-style campaign I have ever witnessed.”

“As a Mother and a human being, If you have even a shred of dignity left, I ask that you stop these desperate attacks and start behaving like someone our kids can look up to,” she said in a statement. “Is this job in Congress really worth throwing away your self-respect? Are those Fox News appearances that important to your ego? Are Lowcountry children really that expendable to you?”

This isn’t the first time that Mace has relied on transphobic lies to get elected. In 2020, when she was first running for Congress, she accused her then-opponent and former Rep. Joe Cunningham of voting for a bill that required the military to treat transgender servicemembers equally and said that the law threatened to shut down a military base in their district.

“Cunningham and Pelosi passed a law requiring transgendered [sic] equality in the military, a liberal mandate that will close Parris Island,” the ad said.

No such bill existed.