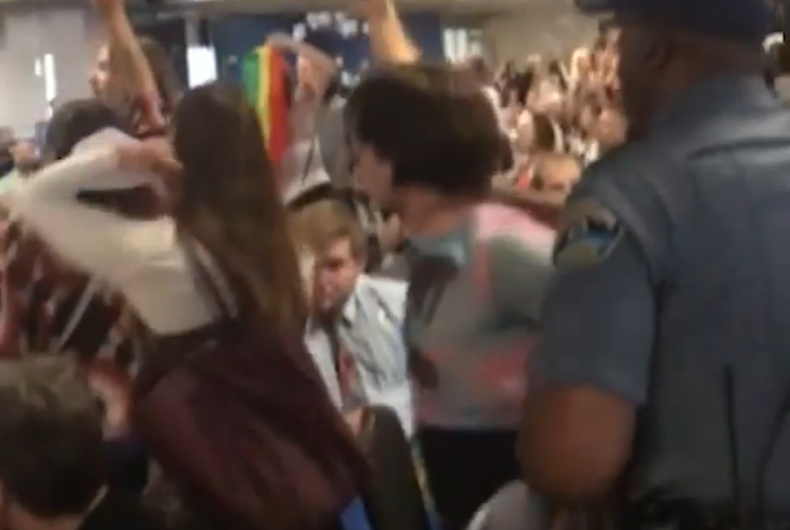 “Fuck the church, fuck the state, you can’t make us procreate!”

That was the sound of “queer joy” at a forced-birth fundraiser this summer in St. Louis, when members of ResistSTL shed their disguises as volunteers at the event and stood up and shouted for reproductive rights.

Shedding their disguises at the appointed time for booty shorts and rainbow attire, the undercover activists took to the stage and halted the event, using whistles, chants, and dancing to make their case for reproductive justice. One protester’s T-shirt read “Fa***ts against fascism.” An unfurled banner claimed, “Abortion is Holy.”

In short order the protesters were pushed off the stage and out of the building by Coalition Life staff and local police.

“But they never dropped their attitude of jubilant resistance,” the group posted to Facebook. “Antiabortion groups such as Coalition Life can no longer rely on anonymity for their fundraising and advocacy efforts.”

ResistSTL member Jessica called the demonstration an exercise in “queer joy,” according to the The Mary Sue.

The protest worked in stages. A first wave started at the event’s entrance, after a small group changed into demo attire in the bathroom and emerged with flyers, condoms, and lube to distribute among attendees. That caught the attention of security, who were distracted when the main demonstration erupted.

The infiltration action succeeded on multiple levels. Not only were they heard loud and clear from the stage, they say they undermined Coalition Life’s trust in who was actually on the  pro-life group’s side.

“That worked really well,” organizer Emily Ehley told the Riverfront Times. “At some point, they just kicked out all their volunteers because they weren’t really sure how to know who was real and who wasn’t. So that also helped to destabilize their efforts, because then they just didn’t have any of those volunteers to help them the rest of the event.”

“We cannot fight them in the courts anymore,” said protester Keith Rose. “They’ve made that impossible. We can’t really fight them in the legislature, at least here in Missouri anymore — they’ve made that impossible, even though we are a majority of the national population. So we’re going to be fighting them in a more guerrilla style. That’s what they’ve done. They’ve forced us to have to use asymmetrical tactics like infiltration, because they’re not willing to play fair.”