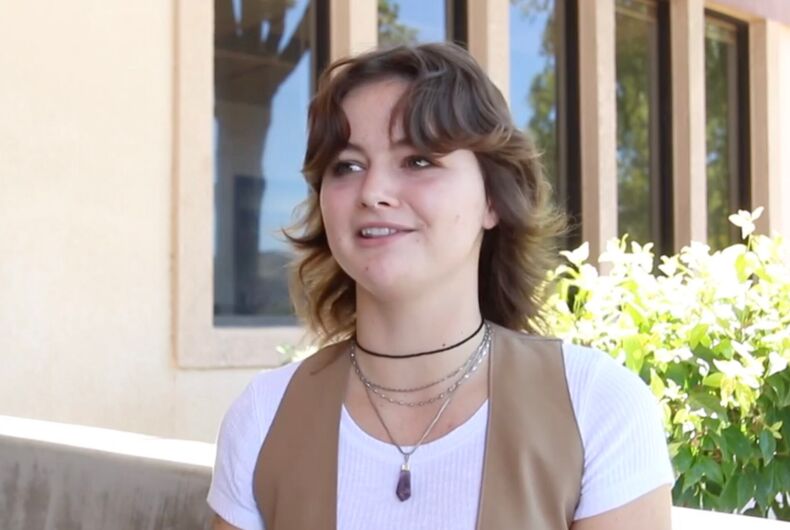 Last year, a group of California students at Paso Robles High School stole a Pride flag from a teacher’s classroom and defecated on it before flushing it down the toilet. Proud of what they did, they even shared a video of the their actions on social media.

For then-senior Ava Hughes, who is gay, this incident was the final straw.

After several anti-LGBTQ incidents on campus and a lackluster response from the school, Hughes decided it was time to stand up and fight for the acceptance that she and her fellow LGBTQ students deserved.

So Hughes and other students held a “Coming Out Against Hate” forum. 300 people attended, and in front of them all, Hughes made a speech coming out as gay.

“I was scared to come out publicly and be involved in it,” Hughes told the San Luis Obispo Tribune. “And I didn’t want to at first, but when it comes to a certain point, you know you can’t really stay silent because it just makes everything worse.”

After the forum, Hughes, along with a committed group of students, continued to advocate for more support from her school administration. They were unsatisfied with the response to the flag incident, after which the school made a rule that said flags could not be larger than two feet by two feet.

“We continue to believe that this is a very reasonable compromise solution that allows rainbows, but within reason,” district superintendent Curt Dubost told The Tribune at the time.

The forum also led to the creation of a superintendent’s LGBTQIA+ task force, of which Hughes was part. The efforts of the task force led to a gender-neutral prom court, rather than a king and a queen, as well as a partnership with the school librarian to include more books with queer characters in the library. The school’s Equity Club also hosted a week-long Pride event.

Nevertheless, Hughes said many of the students’ requests – such as teaching queer history in classrooms – have yet to be honored, and there is still a long road ahead before LGBTQ people can feel fully accepted in the Paso Robles community. The community remains conservative and many people still do not respect LGBTQ identities.

Hughes has since graduated and now attends San Francisco State University, but she still hopes to be a part of making life better for LGBTQ people in her hometown.

“I still owe that to the queer community there, and I hope that someday, I am truly proud of where I came from,” she said.

Nevertheless, Hughes believes a lot of good has come from the students’ efforts.

“I’ve been having so many incredible opportunities that came from that absolutely terrible thing that happened,” Hughes said.

“Everything changed this year at our school,” she also stated, “and it wouldn’t have happened if a hate crime didn’t happen.”

Judge removed from the bench after allegedly spewing hateful remarks