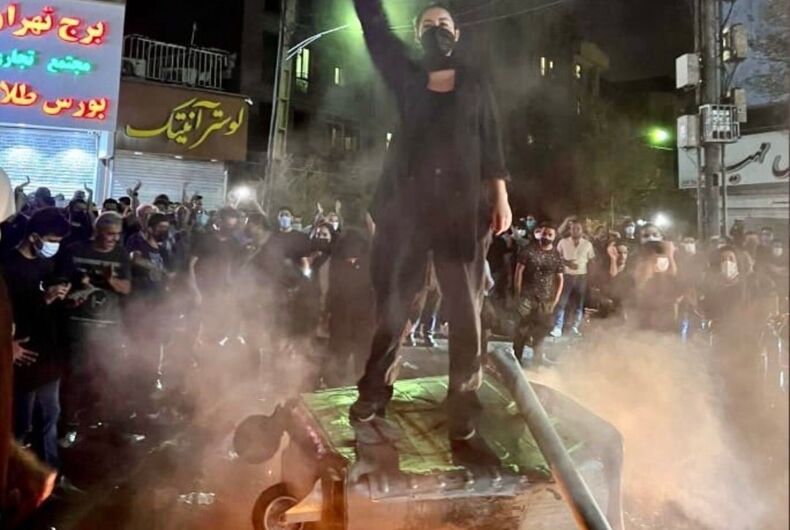 An identified woman stands defiantly atop a lit dumpster in Tehran.Photo: Photographer is not identified for safety reasons

“Woman, Life, Freedom” is the slogan shouted by tens of thousands of Iranians across the country after the murder of Mahsa Amini at the hands of the brutal morality police simply because she was wearing her hijab incorrectly. This is the biggest protest in Iran since 1979; many Iranians describe it as the new revolution.

But what do Iranians mean when they shout “Woman, Life, Freedom” and why it has been grotesquely misrepresented?

On International Women’s Day on March 8, less than a month after the 1979 Iranian Revolution, thousands of women came to the streets to protest against claims made by Ayatollah Khomeini that aimed to take away women’s basic rights. The same women who, just a few days ago, came to the streets for Khomeini now protested against his government. This was the very first demonstration from the public that they were against theocracy. Unfortunately, the demonstrations ended when Khomeini falsely promised women that their rights wouldn’t be taken away.

Of course, Khomeini lied – as was his tradition. Slowly but surely, rights were taken away. At first, private corporations and government institutions didn’t allow women to work without wearing the hijab; then, after a while, this became the rule of law for every woman, everywhere. Hijab was the symbol of the gender apartheid that Khomeini and his fascist ideals were pioneering.

“The regime deprived Iranian women not just of their present rights, but also of their history and their past,” Azar Nafisi, the acclaimed author of Reading Lolita in Tehran, told LGBTQ Nation.

Nafisi was a University teacher who came back to Iran after the revolution with great hope and aspirations to finally be able to teach freely to her students. But she was faced with the bleak reality that this revolution, with all its greatness and hopes, was stolen by people far worse than anyone who came before them.

This bleak reality made her flee the country once again, like many other Iranian teachers and academics. Khomeini’s contempt for anyone who wasn’t a male devoted Shia-Muslim was shown immediately when he said, “Universities are far more dangerous than cluster bombs.”

Intellectuals were among the first targets of Khomeini’s fascistic reforms, which became known as the Cultural Revolution. The success of this revolution can be seen in the current leaders of the Islamic Republic. Ebrahim Raisi, a man who is notably known to only have attended elementary school, is now the president of the country. He even defended his education by saying, “During my time, elementary school was as hard as modern Ph.D. courses.”

In 1980, the Iran-Iraq war broke out, and many Iranians couldn’t find the time to continue their struggle against Khomeini’s government. After all, a foreign threat was, at the time, a much greater concern.

The war lasted for eight years; a dear friend of my father, who was a Baháʼí, served and died in the war. The Islamic Republic not only would not allow them to build a grave for the fallen hero, but persecuted his family and eventually murdered them. Baháʼí people and many other minorities such as Jews and Sunni Muslims, alongside ethnic minorities such as Kurds, became the target of Khomeini’s regime.

The Islamic Republic, the thieves of the Iranian revolution and pioneers of modern Islamo-Fascism in the Middle East, have committed so many atrocities by this point that many Iranians wondered if they did the right thing. Would it have been better if Saddam Hussein had taken over Iran?

This line of thinking is echoed heavily in the streets when the people shout, “Our enemy is here. They lie; it’s the USA.” Without hesitation, people know and recognize that the Islamic Republic is their real enemy. This is why it’s so incredibly important to understand the Iranian people’s goal is not to reform or remove the morality police that was responsible for the death of Mahsa Amini.

They don’t want to change certain aspects of their regime when they burn the Islamic Republic’s flag. They don’t just want to remove the mandatory hijab when they shout, “The core of the regime is our target” or “Mullahs must go to hell.”

“Woman, Life, Freedom,” the main slogan used by protestors, was previously a Communist motto (“Work, Bread, Freedom”) that was rephrased by socialist and feminist Kurds in their fight against ISIS and now is used all across the country to stand for freedom from the Islamic Republic. A Baháʼí woman tweeted, “I shout Woman, Life, Freedom for all the years that I couldn’t go to school just because I was born a Baháʼí.”

#WomenLifeFreedom
Let us march today for Mahsa and ALL the women of Iran pic.twitter.com/jlPKVAgI5h

LGBTQ people, women, Kurds, Afghans, and all the people who have been persecuted by the regime have now found solidarity under this slogan – three astonishing words that unite the whole country against everything the regime was founded on.

The first word is “woman” or, as we say,”zan” because its beauty was the first thing Khomeini took away. Iranian women who were symbols of bravery and revolution for centuries were reduced to child-bearers. An entity one should be ashamed of. An entity you can buy and sell. An entity without dignity or rights.

The second word is “life” or, as we say, “zendegi.” The reason zendegi and zan sound similar is because, in Persian tradition, life and women are one and the same. Life was given to us by women, and it’s only right to call it by their name. When the regime took away women’s rights, it also took away people’s lives – the lives of sexual minorities, religious minorities, ethnic minorities, and anyone who didn’t think like the theocratic leaders.

It’s time for this brutal regime to go. The regime that forces girls to wear hijab at 7. The regime that murders women for showing strands of hair underneath mandatory hijab. The regime that kills activists w impunity. #MahsaAmini #WomenLifeFreedom#مهسا_ایمنی #زن_زندگی_آزادی pic.twitter.com/YZgNrLudiH

And the last word is “freedom.” It hasn’t changed from the original motto because it hasn’t been achieved. Iranians have been fighting for freedom for centuries. It’s the only thing they yearn for and cry for. They have revolted many times and have voted even more, but it was either stolen or ripped to shreds by foreign forces and compatriot traitors.

“Enough is enough,” say Iranians. They are tired of living under tyrannies of kings, mullahs, and anyone who threatens their way of life.

Khomeini and his successor, Khamenei, tried to implement their sexist ideals in Iran for 40 long years. They allowed men to take four wives, beat them to death, and make them their objects. However, today, brave Iranians have shown that these 40 years were as fruitless as Persian Chenar trees. Not only does the new generation of men spit on these doctrines, but they hold hands with their sisters to fight against the regime’s gender apartheid which is, undoubtedly, the government’s very heart.

Past 10 days, people all over Iran protest for:
Women, Life, Freedom