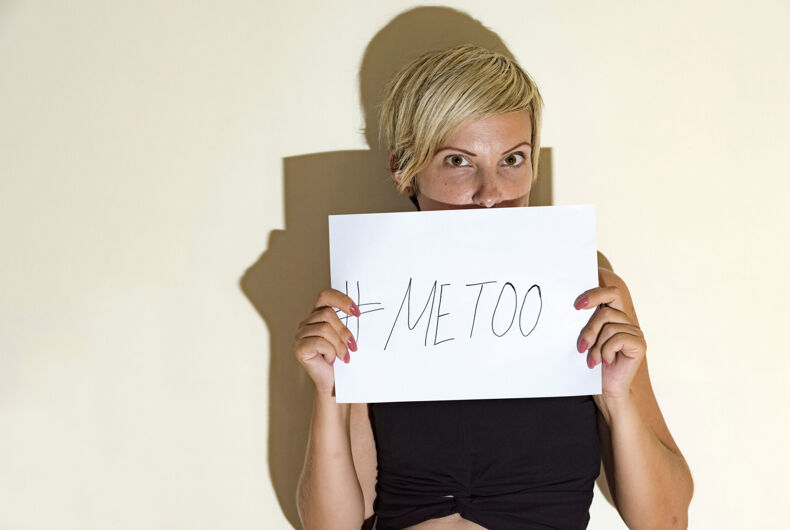 “I know this is new to you, but I’ve dated a lot of women. This is just par for the course. This is the risk you’re taking,” Carmen Maria Machado’s lover tells her in In The Dream House, after fighting off a drunk man who’d nearly accosted her on the street.

According to the CDC, the rates at which lesbian, gay and bisexual people experience sexual violence are higher than straight people. Their studies cited the higher rates of poverty, stigma, and marginalization that LGBTQ people face as contributors to the higher incidences.

Lesbians especially are subject to greater risk, given the pornification and objectification of our lives. As a queer woman, I have my own long list of incidents involving harassment at the hands of cis men.

Back in college, I once sat with my head against my then girlfriend’s shoulder on a sidewalk bench when suddenly we heard a click, and a guy yelling “Sweet!” By the time I’d processed that he had snapped a picture of us with his phone, he and his four friends had already run off laughing.

Another time, a man requested a kiss from me and the girl I was with (at none other than a gay club). Still another man, after discovering that a woman and I were on a date, responded with, “That’s okay, I don’t have a problem with that” while proceeding to remain at our side, his face so close I could smell the beer on his breath.

It would be one thing if these were just benign comments, or innocuous “boys will be boys” moments, yet the risk is always there for this supposedly harmless behavior to escalate into more.

The night a man saw my date and me at a bar, followed us out, and continued trailing us for several blocks, I remember feeling unsettled and unsure what to do. We were both short women, it was late, and neither of us was carrying pepper spray.

Harassment of queer women has roots in history. A look back shows that gay men and women were both subject to attempts at conversation therapy, given homosexuality’s classification as an illness until 1973. Still, it was uniquely women for whom penetration and more specifically “corrective rape” were among the tools employed to overwrite or “cure’” deranged sexuality.

The practice emerged as a prominent concern in South Africa in 2003, when newspapers reported on the staggering number of lesbians coming forward with accounts of assault, rape and homophobia-driven attacks, and is still practiced in some countries, including Jamaica.

Sadly, many LGBT sexual assault survivors hesitate to consult with police or rape crisis centers. Treatment barriers like discrimination prevent victims from seeking and obtaining the help they need (According to hrc.org, “85 percent of victim advocates surveyed by the NCAVP reported having worked with an LGBTQ survivor who was denied services because of their sexual orientation or gender identity”).

Misinformation about sexual assault also continues to circulate. Here are some that harm all victims, but members of the LGBTQ community especially.

Myth: It is primarily committed by strangers.

Reality: Friends, partners, and acquaintances are responsible for a significant portion of assaults that adds a whole layer of complexity to the recovery process.

The Me Too movement has shone a light on other forms of sexual misconduct beyond the most obvious and egregious examples. Not all assault is incurred by strange men on dark street corners, for instance. Nor does all of it involve resistance, repeated “no’s”, and overpowering of the victim with physical force.

Violation can occur along a spectrum, from full-on penetrative rape to waiting until someone is in an altered state to make a move. And just as often (if not more), a person who may have initially consented is violated by a person who could not accept their change of mind— or by someone whom they once trusted.

In high school, I was violated by a friend. Back in 2013, I was also sexually assaulted by a stranger. The latter incident was blatantly forceful and more severe—yet both experiences affected me on a comparable level.

I’ve learned that this isn’t atypical. According to psychologist Elyssa Barbash, “Generally speaking, the closer you were with the person who committed the assault, the more likely you are to be impacted by the trauma.”

No trust was broken for me the night a stranger assaulted me. Though pain and trauma resulted, the fact that the man wasn’t woven into my community made it somewhat easier to relegate him to a single awful occasion—one that recedes [ever] deeper into the recesses of memory with each passing day.

When the person occupies a space in your social network (however slight or peripheral), doing this proves more difficult. As author Laurie Halse Anderson writes in her memoir Shout, “He didn’t just rape my body; he broke the concrete of all the sidewalks, so I trip when I walk to class; He poisons the air in the cafeteria, with the laughter of his friends.”

And sadly this happens a lot. Approximately two-thirds of sexual assaults are committed by someone the victim knows. Thirty-eight percent of rapists are a friend or acquaintances of the victim.

Gay men are also disproportionately affected. Because men tend to be the perpetrators more often than women, male victims who speak up are taken less seriously. Gay men, in particular, are assumed to have multiple sex partners, which makes it easier for some to dismiss. They use the justification that voluntary placement of one’s self in a sexual situation makes you partially responsible for your assault—even though it is still assault regardless. https://www.hrc.org/resources/sexual-assault-and-the-lgbt-community

Myth: Failure to physically shove someone off means the person gave consent.

If I just go still and pretend to be asleep, will he keep trying? I remember thinking, the night a guy kept pressuring me for sex, and I kept saying no (while trying to be polite about it). How long will he poke me and repeat my name before he gives up? I even asked myself.

Another night, rather than wait for any kind of cue that I was receptive to it, my housemate pushed me against a wall and began making out with me. It was only later that I realized that my not having shoved her off didn’t mean I had given unambiguous consent.

We aren’t always direct in our “no.” Sometimes it’s because we freeze. Other times we’re caught off guard. This still doesn’t mean the onus is on us, or that it’s our fault when our boundaries are crossed.

In daily life, people give off nonverbal cues that indicate discomfort, and part of behaving with integrity means paying attention to them and adjusting one’s behavior accordingly.  Across innumerable situations, we attune to nonverbal signals— and when there is ambiguity, we ask for clarification.

Myth: A significant number of victims make up the memory for attention.

Reality: For many, it actually takes years to even acknowledge or come to terms with what happened.

In the 2021 Oscar nominee A Promising Young Woman, the protagonist is repeatedly dismissed when she shares her friend’s assault (by a well-liked man). It’s easier for them to write her off than to be forced to think poorly of a person they felt invested in continuing to venerate.

Too many survivors can relate to this. I know I did. In fact, I had a good cry after watching it. A commitment to preserving the perpetrator’s reputation often gives birth to the belief that women purposefully invent, exaggerate, or change the facts for attention.

As a result, gaslighting from the abuser is common. Too often, those who commit assault remember what they want to believe, closing themselves off to any perspective or version of reality that doesn’t align with their own. If the same applied to those harmed, we would hear significantly fewer assault stories (because what person wants to carry that kind of memory around?)

Few victims receive accountability, and perpetrators across the planet continue to commit assault with zero or minimal repercussions. And plenty of others evade punishment entirely.

For this reason, it’s important we have our own spaces. An integral part of our recovery process takes place through sharing our stories with trusted confidantes and having safe spaces to convene in. This is still an area that’s lacking for queer women, with gay men’s spaces continuing to vastly outnumber lesbian ones.

Every survivor deserves a space to heal and reclaim what was taken from them: the ineffable sense of emotional safety that should be our birthright. We deserve a viscerally felt “you are okay.” We deserve to feel completely at home inside our skin.

I hope we can arrive there someday by continuing to challenge these myths, provide resources, and expand the conversation around sexual assault.