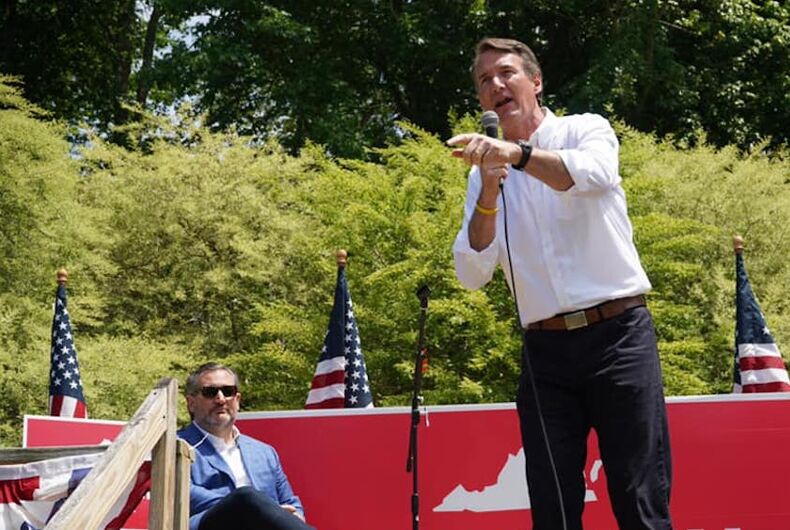 A series of moves by Republican governor Glenn Youngkin of Virginia is bringing his policy of “parental rights” for the Commonwealth closer to reality.

In July, Youngkin appointed five new members to the State Board of Education, giving the governor a conservative majority. The Board sets statewide curriculum standards and high school graduation requirements, and establishes state testing and assessment programs.

With the Board’s support assured, Youngkin came out on Tuesday with his most explicit endorsement of a policy transgender rights supporters in Virginia have long feared: informing parents of their kids’ sexual orientation and gender identity without the student’s express permission.

“With regards to informing parents with most important decisions about their children,” Youngkin told WJLA News, “I think everybody knows where I stand: parents matter. Parents should be at the forefront of all of these discussions. And I firmly believe that teachers and schools have an obligation to make sure that parents are well informed about what’s happening in their kids’ lives.”

Local school board policy on the question of whether to out trans kids to their parents varies by county.

In Loudoun Co., regulations state: “A student’s gender identity or transgender status should not be shared without the student’s consent.”

In Fairfax Co., a similar policy is in place. “Regulation 2603 protects the relationship between parent/guardians and children or youth by preventing teachers from putting themselves in the middle, willy-nilly,” said LGBTQ advocate Robert Rigby.

“No one should take this crucial discussion of ‘coming out’ away from the students and parents by ‘outing’ someone. It feels and is really intrusive and can be damaging to the parent/child relationship, sometimes permanently.”

In April, Youngkin signed into law two pieces of legislation that “both deliver on my Day One promises to give parents a greater say in their children’s education.” HB 938 directs the Board of Education to make recommendations to the General Assembly for increased “transparency” in the state’s curriculum, among other policy measures.

SB656 requires the Department of Education to develop “policies for ensuring parental notification of any instructional material that includes sexually explicit content.”

Shortly after taking office in January, Youngkin set up a “tip line” for Virginia parents to report “divisive practices” in schools, including materials parents may find objectionable.

In March, a letter from the Virginia Association of School Superintendents expressed disapproval of the Governor’s education agenda, and asked Youngkin to eliminate the “tip line”.

That same month, more than a dozen news organizations accused Youngkin in a lawsuit filed in Richmond Circuit Court of violating the state’s public records law by refusing to turn over “tip line” emails.

What is straightwashing? Here are some prominent examples in the media