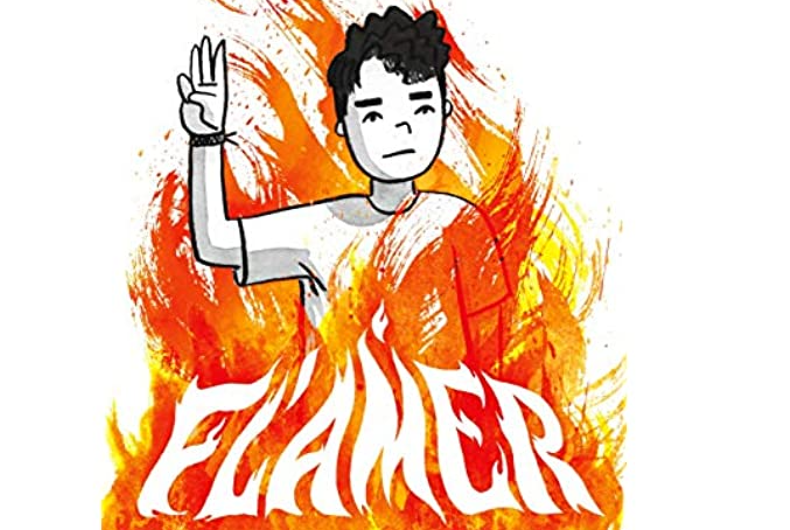 A police officer in Katy, Texas recently removed a copy of Mike Curato’s Flamer, a gay YA graphic novel, from a high school library shelf in the small town near Houston.

And then he put it back.

The school district kerfuffle was instigated by a local book-banning Karen, who remains anonymous.

The woman claimed the coming-of-age story, with a publisher’s recommended reading age of 14+ or with adult guidance, was “pornographic” and “harmful” to minors.

According to a Katy Independent School District police report, the one-woman dust-up started July 21 when she arrived at police headquarters (Texas school districts maintain their own police forces).

She complained that Katy ISD was violating Texas penal code 43.24, which “prohibits the sale, distribution or display of harmful material to minors,” because the book was available in high school libraries.

The woman said she’d already filed complaints about the book with the school district, but wasn’t satisfied with the outcome.

She wanted to speak to a manager.

Curato’s Flamer is a semi-autobiographical story about a boy navigating friendship and bullying at summer camp. It won the 2021 Lambda Literary Award for Children’s and Young Adult Literature and made Texas’ own 2021 Maverick Graphic Novels Reading List of the Texas Library Association, among many other accolades.

The book had already been reviewed by a school district committee in March, and deemed appropriate for high-schoolers.

According to the police report, the woman said her complaint originated at Jordan High School in Katy, but the book was also in other high schools, so she wanted to “extend the grievance” to the entire district.

“Per Governor Abbott and the TEA, the book ‘Flamer’ should have been removed from KISD library shelves but it still remains,” the woman said in a follow-up email to police. “The KISD Police Report will be sent to the Texas Rangers office.”

According to Maria Corrales DiPetta, general manager of media relations for the district, that’s when a Katy ISD officer “checked out” the book as part of the investigation.

The school’s principal “explained that when ‘Flamer’ was initially complained on [sic], it was pulled from school library shelves, reviewed, permanently removed from junior high libraries, and then returned to high school libraries upon being deemed appropriate for high school,” the police report states.

A district deputy superintendent provided documents from the review process.

“The book has gone through multiple review processes by the district, including one with a committee made up of librarians, parents, and teachers, and deemed appropriate for high school libraries,” the report reads. “The complainant also still has the opportunity to take her complaint before the KISD board.” Again.

A Houston Chronicle analysis found that in Katy ISD, 104 books were reviewed and 43 were removed or partially removed since 2018, making it one of the most restrictive school districts in the state.