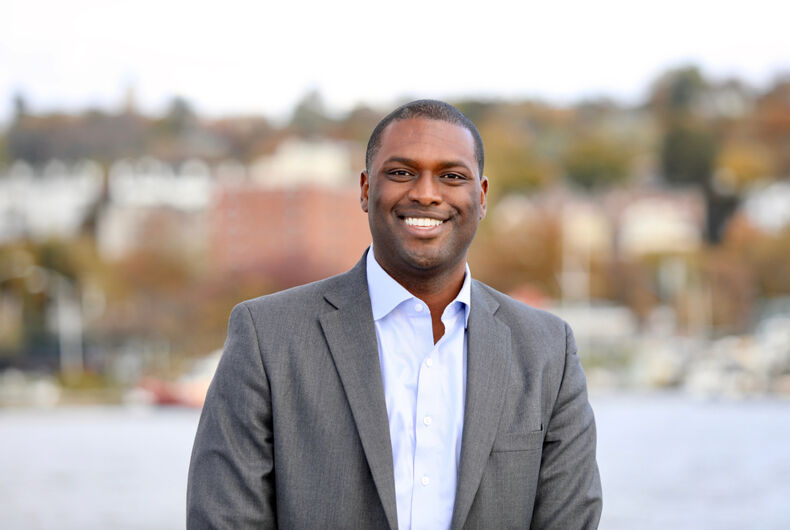 Jones, who was endorsed by House Speaker Nancy Pelosi (D-CA) and Sen. Cory Booker (D-NJ), came in third in the crowded primary race. He currently represents New York’s 17th Congressional District, where he was challenged by Rep. Sean Patrick Maloney (D), the chair of the Democratic Congressional Campaign Committee. Maloney drew criticism for running against a sitting Democrat, as well as for being a white politician trying to unseat one of the two Black and gay members of congress.

Rather than running against Maloney, Jones opted to run for New York’s newly drawn 10th district. Goldman is expected to win the solidly Democratic seat in November.

Ahead of Tuesday’s primary, Jones told The Grio that “to lose me in the House would be a blow to our democracy and the fight to protect fundamental rights,” adding, “I have been a leading progressive member of Congress, who has brought the rest of the Democratic caucus with him on issues like Supreme Court expansion, and voting rights and democracy reforms.”

Jones was elected in 2020 and was selected to be the Freshman Representative to Leadership, the “most influential role available to a freshman member of Congress.” When they took office in January 2021, he and Rep. Richie Torres (D-NY) become the nation’s first out gay Black members of Congress.

As a member of Congress, Jones was an advocate for LGBTQ rights. “I didn’t have images growing up of queer people and sort of respected in public life, whether on television or in politics,” he said in June. “And I certainly didn’t see queer people of color in those roles.”

“I think I am uniquely situated to galvanize communities that have historically been shut out of the political process,” Jones told LGBTQ Nation in 2019, “and leverage that to apply pressure on Republicans in Congress who are not speaking to the views of most Americans, who are being allowed to get by because so many people are disillusioned with our politics that they’re not paying attention to what’s going on and they’re not holding their representatives accountable.”

“The result in Mondaire’s race is deeply sad for the LGBTQ community,” LGBTQ Victory Fund President and CEO Annise Parker said. “We’ve lost a fierce advocate and LGBTQ pioneer in Congress who used every ounce of his political power to fight for a more equitable and fair America.”

Back in New York’s 17th Congressional District, Maloney easily won his primary battle against progressive challenger, Rep. Alessandra Biaggi (D-NY). He got 67% of the vote and she got 33%.