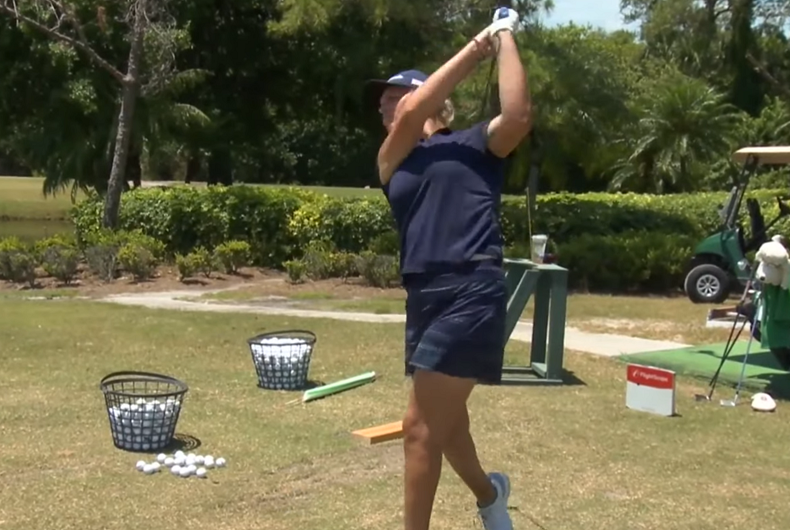 Twenty-nine-year-old Hailey Davidson may become the first out transgender golfer ever to join the Ladies Professional Golf Association (LPGA) tour. But along the way, she’s facing criticism from those who claim that her trans identity gives her an unfair competitive edge over cisgender female athletes.

Davidson is currently ranked 59th out of 310 golfers after the first two rounds of the LPGA and Epson Tour Qualifying School (Q-school) held in Palm Desert, Florida this last weekend. If she scores under 88 in round three and remains among the top 100 players, she could advance to the second and final qualifying matches for the full LPGA tour.

Last June, the LPGA informed Davidson that she was eligible to compete in the Q-school after she met its to undergo gender reassignment surgery and complete at least one year of hormonal therapy.

Davidson’s rise in the LPGA has made her a target of public criticism, Most notably by Judy Murray, a tennis coach who is also the mother of former world number one Andy Murray, tweeted earlier this month when referencing Davidson’s Q-school progress, “No. Not fair at all. Protect women’s sport. Listen to the facts, the scientists and the medics. This is wrong.”

Sports science studies have yet to definitively conclude whether biological changes caused by puberty give trans women advantages over cis women in all sports that can’t be negated by hormone replacement therapy. Despite this, numerous people and right-wing commenters have claimed that trans women are dominating women’s sports, even though very few trans women win at professional sports and no professional sport has ever become dominated by transgender women.

“I guess that’s what frustrates me the most,” Davidson told GolfWeek in 2021.

“If I play bad, then people will feel justified, ‘Oh well, she played bad and wasn’t good enough,’” she said. “If I do anything good, it won’t be because of the fact that I put my whole life into this — it would be because I’m trans.”

In July, Davidson told the Like It Is podcast that people who oppose trans women in sports aren’t actually concerned about sports science or “protecting women’s sports,” they’re just transphobic.

Trans male competitive swimmer Schuyler Bailar has made similar arguments, noting that people who argue about protecting women’s sports never fight to get increased funding or discourage sexist discrimination and sexual abuse that keeps many female athletes from even getting on the field.

Davidson is actually the second known out trans golfer to compete in the LPGA’s Q-school. The first was Bobbi Lancaster, a 63-year-old physician who ended up becoming a speaker on human rights issues rather than a LPGA tour member. Lancaster said that, while playing in the Q-school in 2013, a caddie told her that other women didn’t want to play with her because she “didn’t belong.”

The LPGA connected Davidson with Lancaster, and Lancaster now serves as a mentor to Davidson.

“I’ve tried to give her a sneak peek of what it was like to be accused of being a cheater, to have an unfair advantage,” Lancaster said. “Those complaints might happen. It obviously didn’t dissuade me from taking a run at it. But I never got much pushback because I just didn’t play as well as the other elite players. I was just too old.”

Singapore to repeal colonial-era law against sex between men

Republicans have found a way to bypass your Gmail spam filters