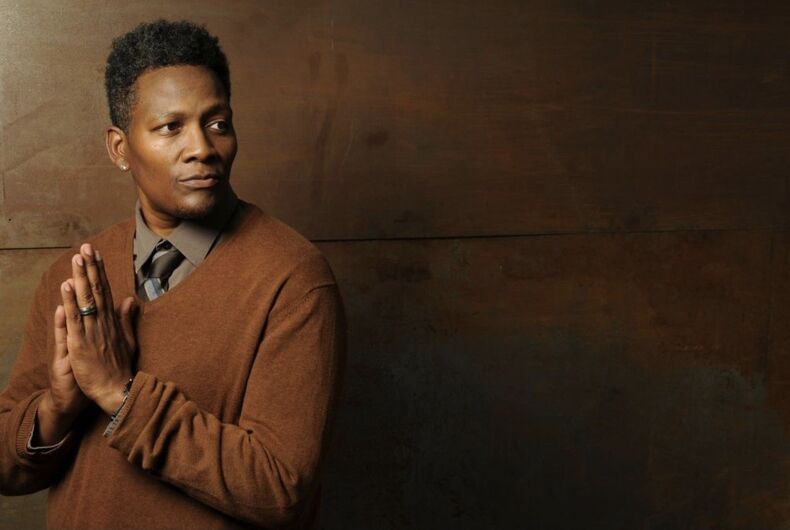 Actor Lea Robinson isn’t used to seeing themselves in a period piece on TV. But A League of Their Own, premiering Aug. 12 on Amazon, looks to rectify the lack of representation by centering LGBTQ characters. Robinson plays Bertie, a non-binary character, in the new series.

“We haven’t seen a lot of stories like Bertie’s before,” Robinson told LGBTQ Nation. “Someone who is a person of color and non-binary, we don’t see those stories in history often. History has been whitewashed and straightwashed but these characters existed. These people existed. I felt so honored to be a part of telling these stories and telling a story similar to mine for a person like Bertie.”

A League of Their Own follows the Rockford Peaches, an all-female baseball team that comes together during World War II to play in absence of the many men who were drafted overseas. The original 1992 film followed Geena Davis and Lori Petty as competitive sisters who are naturals at the sport. The one thing the original film is missing is the realistic representation of the 1940s.

Looking back at the 1940s, people of color and queer people existed but were rarely ever shown in media. The new Amazon series has a mission to highlight these women and non-binary individuals to show that all types of people existed and were a part of bringing joy to Americans during times of war.

It turns out that joy is an important part of the series, especially finding it in the face of adversity. And according to Robinson, who identifies as transgender, that joy is figuring out who one is and accepting that.

“One of the big stories in this show was to show joy even in the face of adversity that these characters experience. Bertie and Max, a new character played by the amazing Chante Adams, have a history and relationship, and Bertie provides an environment for Max to accept themselves and for Bertie to accept themselves also.”

“Bertie has a lot that she deals with when it comes to her family,” they continued. “But there’s this notion of found family that this show provides and that’s something that I love.”

For LGBTQ people, found family is an important concept. There are many situations that find queer people in search of a family because the one they were born into doesn’t accept them for who they are. This was a narrative in the series that Robinson identified strongly with.

“I have my own experience of having found family while learning to be myself. It’s always been important to me to create inclusive and braver spaces and to support other people. I connected to Bertie in that way, someone who creates a space for other people to grow into being themselves,” Robinson says.

“That’s something I love bringing to this character, something I could really identify with. I walk through this world like Bertie and that visibility is important. I wanted to bring a lot of myself to this role because I know that visibility helps audiences who are watching.”

Robinson understands how important on-screen representation is. The storylines that involve Bertie look to provide some positivity to non-binary and trans audiences watching the series looking to identify with characters that they have never seen in history before. And that’s why Robinson signed on to the show.

According to Robinson, they have never been happier to take on a role. It turns out that the series not only wants to achieve positive representation in front of the camera but also behind the scenes. When asked what the process was like creating the series, Robinson only had positive things to share.

“It was incredible. Everyone cared so much about doing right by the series and portraying characters that could mean a lot to audiences. One thing that was really important on set was getting pronouns right. The care on set was incredible, just a ton of respect between actors and crew members. Everyone cared about creating braver spaces for us all to authentically be ourselves and to tell these stories.”

Robinson hopes this translates over to what audiences see when they tune into the new series. They have a lot of hopes for the many people who are not only looking for a nostalgia trip back in time but also to see themselves represented on screen.

With the type of care and joy that people like Robinson bring to the show, it’s hard to see why audiences won’t.

Montreal Pride parade was suddenly canceled. That didn’t stop hundreds from marching in the streets