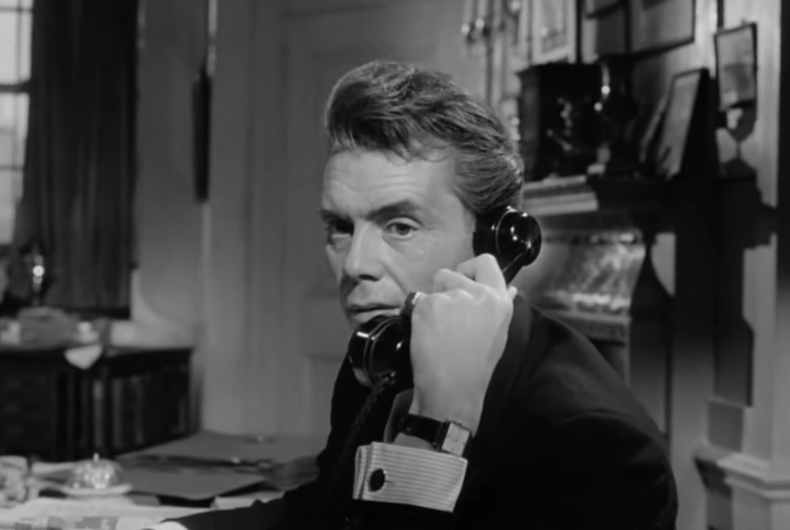 “You knew of course he was a homosexual,” a police officer says to the up-and-coming star of the British legal scene, lawyer Melville Farr (Dirk Bogarde).

The officer refers to Jack Barrett (Peter McEnery), a young man who we’ve seen constantly trying to get in touch with Farr, only to be ignored repeatedly. Farr isn’t surprised by the revelation that Barrett is gay, in fact, he tells the officer he suspected as much. He is astonished to learn that Barrett has hung himself in his prison cell, which spurs Farr on a journey destined to change his life forever.

The line is an innocuous one—a mere statement of fact. In truth, it was an extremely groundbreaking moment in cinema history, and the first utterance of the word “homosexual” in an English-language film.

Victim, directed by Basil Dearden and released in the UK in 1961, was made at a time when having homosexual characters or even mentioning homosexuality at all, was against the law. In fact, homosexuality wasn’t even decriminalized until 1967, six years after the film was released.

Victim, a magnificently suspenseful film, follows Farr as he tries to identify a vicious blackmailer targeting homosexual men in London. Farr is motivated both by his sense of personal justice – he’s a lawyer, after all – and his own need for self-preservation. Farr is also gay, despite his marriage to his wife Laura (Sylvia Sims). Farr was in a secret relationship with Barrett, who was being blackmailed with a picture of himself and Farr together in a car. Crushed by the realization that Barrett took his own life to protect his lover’s identity, Farr will stop at nothing to save these men, and himself, from the threat of blackmail.

Because of the British anti-buggery laws of the time, blackmail (which was also, and remains, illegal) was often used to trap homosexual men. That fact gives the film not only an important historical accuracy but a startling sense of urgency.

One of the most heartbreaking moments of the film comes via one of the blackmail victims. He’s already been to prison four times simply for being gay, and the fear of being imprisoned another time is enough to kill him. The film refuses to sweep homosexuality under the rug, and directly criticizes the laws that made their lives so incredibly difficult, all while those very laws were still in place.

It’s almost surreal to watch something like Victim today, over 60 years after the film was released. For the average gay person, the very idea of being blackmailed for something that’s no longer illegal is bizarre, but Victim terrifyingly transports audiences back to a time where living your authentic life was all but impossible, and could only be done in the darkest, most secretive margins of society.

It would be easy for a film about homosexuality in the early 60s to be full of hatred and nastiness. Of course, in an effort to reflect reality, there are people in the film deeply uncomfortable about gay people at best, and outwardly vile at worst, but Victim is far more interested in the realities the gay people face, and the way the laws disproportionately affect their lives. It is an incredibly sympathetic movie that cares deeply for its gay characters, at a time when no other film would even acknowledge they exist.

It’s bold and daring filmmaking, but Victim really succeeds thanks to Bogarde’s brilliant performance as the troubled main character. Though Bogarde was never technically out as a gay man, his sexual orientation was a known secret in Hollywood. He lived with Anthony Forwood, a British actor, for decades until Forwood’s passing in 1988. As a gay man himself, it doesn’t get riskier than playing a gay man who explicitly talks about his homosexuality at a time when doing such was extremely taboo, and against the law.

As Farr, Borgade’s performance is titanic. He’s a tortured man, deeply torn between the successes in his life, both at home and in his career, and the reality of who he really is. Farr is an incredibly well-respected lawyer and has legitimate chances to become a judge one day, and all he has to do is deny his authentic self. He’s not loud or boisterous, but he looms over every moment in the film, and without Bogarde, this would be a very different film.

One of the most startling and powerful moments in the film is a conversation between Farr and his wife, in which he reveals his truest feelings to her. Farr shows his wife the photograph Barrett had been blackmailed with, telling her how he would meet with Barrett regularly. When Sylvia asks why Farr stopped seeing him, he roars “I stopped seeing him because I wanted him.”

It’s a moment of incredible anger but also bitter disappointment. In an ideal world, Farr would have stayed together with Barrett and explored a romance free of discrimination and hatred, but the real world is not so simple. Genuine love without fear is something that Farr will never be able to have, and it tears him apart each and every day, and every moment. It’s a devastating moment, full of such incredible sadness that only a gay actor could possibly achieve.

There’s a long cinematic history of sad gay films, in which homosexual men seem capable of everything but finding genuine happiness. Though the gay men in Victim may not get to live the authentic lives they dream of, Dearden’s film is never interested in casting judgment on its characters and gives them, and especially Farr, a life beyond their sexual orientation, something films made many years later under far less restrictive circumstances often aren’t been able to do. Farr is treated as a tortured hero who winds up making the ultimate sacrifice to try and make the world a better place.

Making Victim, as you can imagine, was no easy feat. There were reports that crew members worked on the film with a not-so-quiet contempt. While the film was surprisingly approved by British censors, it was given an “X” rating, which was regularly reserved for particularly gruesome horror films or erotica. No such luck was given in the United States and it was refused MPAA certification for distribution, though it was eventually released in 1962.

Despite the criticism, Bogarde was sure to face for acting as an openly gay man in the 1960s, in his memoirs it’s clear that he made the right decision, saying that starring in Victim was “the wisest decision I ever made in my cinematic life.” He risked ostracization and the end of his own career, just like Farr does in Victim.

Thankfully, Victim wasn’t the end of Bogarde’s career. He went on to make some of the most daring and memorable films of his entire life; including Joseph Losey’s The Servant in 1962, Luchino Visconti’s Death in Venice in 1971, and Rainer Werner Fassbinder’s Despair in 1978. One can only hope Melville Farr had a similar fate.