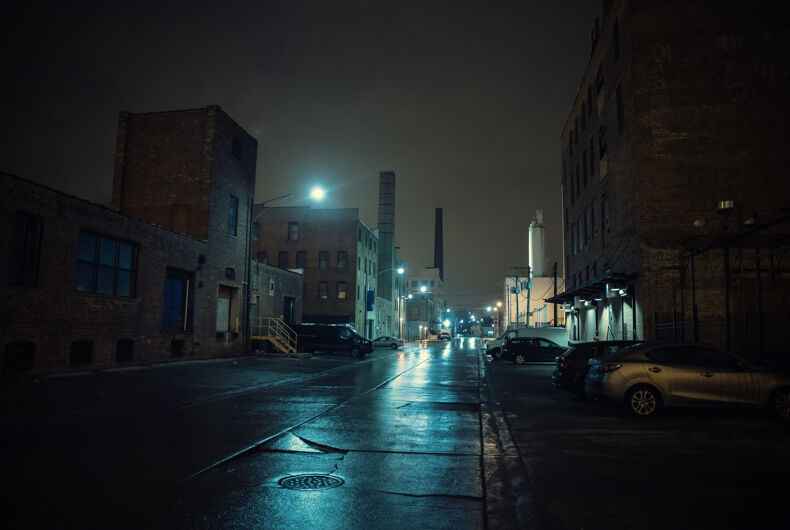 The video is shocking: Two young, slender Black men throw punches at each other on Chicago’s rain-slicked streets while three others look on. Mere moments later, a car slams into the group with a sickening thud. Moans and screams follow as the car speeds off, leaving broken bodies in its wake.

The fatal hit-and-run, which killed three men and injured one, was captured on dashboard camera footage at 5 a.m. on Sunday, near the Jeffrey Pub, a Black gay bar in the city’s South Shore neighborhood. Police recovered the car but are still searching for the driver.

“I was standing outside the bar talking to one of the victims,” a witness told WMAQ-TV. “I took like three steps, and a car came and hit him and he flew over the car.”

The fight began in the pub and then went out into the street before the lethal collision occurred. The hit-and-run injured four men who were taken to the hospital. Three men later died from their injuries: 25-year-old Donald Huey, 23-year-old Jaylen Ausley, and 27-year-old Devonta Vivetter.

“By the time we got halfway in the street, this car came from the street and I seen it through the periphery, seen the bright light,” he added. “That’s what made me jump back. Next thing I know I was hit and woke up in the ambulance.”

Brendan Deenihan, the Chicago Police Department’s chief of detectives, has asked anyone with information about the driver to come forward.

“You can’t charge a car with a crime, obviously,” Deenihan said. “We need to know who the driver was, and we know that people out there know that.”

Huey’s sister, who has kept her name and face private for fear of retaliation, told WBBM-TV, “My brother did not deserve that. He didn’t. Donald was very responsible, respectful, reliable. He would give you the shirt off his back. He was like my child. He was the only person that I had left.”

Huey had recently moved to California but visited Chicago to celebrate his grandmother’s birthday.

Vivetter’s loved ones say he was boisterous, social, and loved to dance, according to Block Club Chicago.

“He was real popular, always living his life, turning up — doing things that, around our age, we do,” said Vivetter’s friend Terry Jones. “If it’s something going on, Devonta’s there.”

Ausley had just graduated from the University of Michigan and wanted to attend an Ivy League grad school. He served as a mentor at Gary Comer Youth Center, an educational community center for Black city kids.

Henderson appealed to the anonymous driver, stating, “Everyone makes mistakes in life. We’re no one to judge, but we’re asking you to look at things from our shoes.”

In a Sunday morning Facebook post, the pub called the incident “a very unfortunate tragic event” and asked anyone with information on the driver to step forward, promising to protect any informer’s anonymity.

“Our hearts heavy this morning that such [a] tragic event has occurred,” the post said. “And to those that lost a loved one or friend we stand with you. We always encourage everyone to leave and go to your vehicles right away to make it home safe.”

Police took up to 30 minutes to respond to the crash, arriving over an hour after the initial emergency call, according to CWBChicago. Police have declined to elaborate on the delay and haven’t yet said whether the incident qualifies as a hate crime.