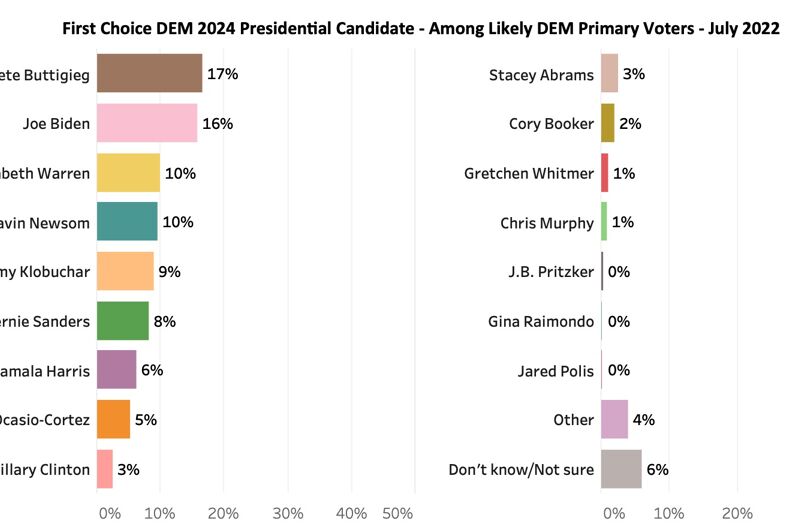 Out Transportation Secretary Pete Buttigieg is tied with President Joe Biden in early polling for New Hampshire’s presidential primary. The state is one of the first to vote during the primary season.

Buttigieg tied with Sen. Bernie Sanders (I-VT) in the state during the 2020 primary. Sanders won 25.6% of the vote while Buttigieg scooped up 24.3%. They were both awarded the same number of primary delegates. Biden placed fifth and received no delegates.

Inflation, Congressional gridlock, and the Supreme Court have stymied Biden’s domestic agenda, leading to low favorability ratings throughout his presidency. Across multiple polls, the numbers are the lowest of his presidency so far.

Recent polling by Quinnipiac shows that only 31% of Americans approve of the way he is doing his job; 60% disapprove. Only 24% wanted Biden to run for a second term.

And polling by the University of New Hampshire paints a similar portrait of Biden’s approval ratings.

74% of New Hampshire residents do not want Biden to run again in 2024; only 20% want him to run. The president’s age, his handling of the economy, and the lack of progress on his campaign promises were the most common concern.

In fact, Biden tied with Buttigieg in support of a potential primary campaign. 17% of Democratic primary voters preferred Buttigieg while 16% supported Biden.

Asked about their second choice for a candidate, Buttigieg tied with Sen. Cory Booker (D-NJ) for first place.

Buttigieg has the highest favorability rating of all potential candidates at 35%. Booker stands at 30% while Biden trails at just 21%.

Buttigieg dropped out of the 2020 race when it became clear that Biden would be the moderate candidate left standing at the end and endorsed Biden shortly after. Buttigieg’s endorsement was seen as a pivotal moment in the Biden campaign.

In a lengthy profile documenting dysfunction in Vice President Kamala Harris’ office, CNN revealed that Harris aides are growing jealous of the White House’s relationship with the out secretary. Harris’ staff feels that Buttigieg is getting preferential treatment by Biden while the vice president has been mostly sidelined.

Only six percent of potential primary voters chose Harris as their first choice; four percent picked her as their second choice.

Gay & bi men are going to Canada to get monkeypox vaccines