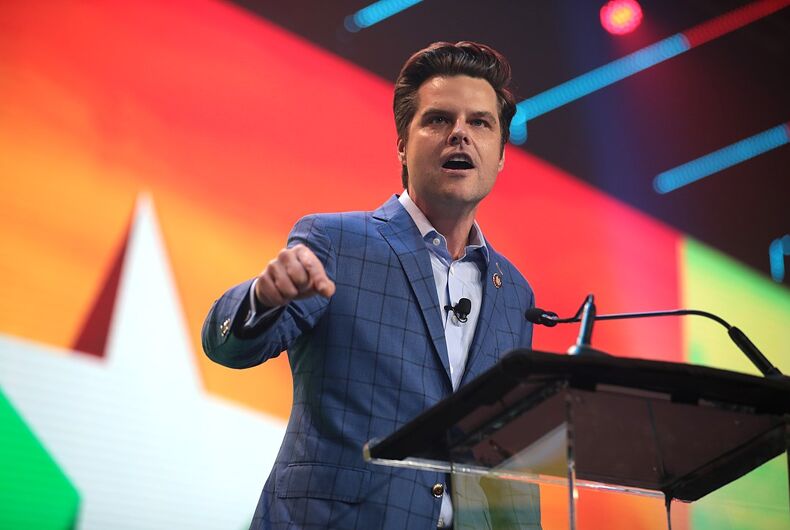 The teen took his insult as an opportunity to do some good and raised $1.4 million in funding for an abortion fund.

Gaetz, who is under federal investigation for sex trafficking involving a minor, made sexist and fatphobic comments about pro-choice women at the Turning Point USA Student Action Summit in Tampa, Florida last weekend.

“But why is it is that the women with the least likelihood of getting pregnant are the ones most worried about having abortions? Nobody wants to impregnate you if you look like a thumb,” Gaetz said.

On Sunday afternoon, 19-year-old Olivia Julianna wrote on Twitter, “It’s come to my attention that Matt Gaetz — alleged pedophile — has said that it’s always the ‘odious.. 5’2 350 pound” women that ‘nobody wants to impregnate’ who rally for abortion. I’m actually 5’11, 6’4 in heels. I wear them so the small men like you are reminded of your place.”

The rightwing site Newsmax said that Gaetz’s comments were “sure to raise dander of his political opponents,” so Gaetz decided to make a joke about Julianna’s body by sharing her profile picture and writing “dander raised,” implying that he doesn’t care about her opinion because she’s one of the unattractive pro-choice activists he was mocking.

Julianna hit back with a tweet linking to the Gen-Z for Choice Abortion Fund, a fundraiser organized by Gen-Z for Change, a youth-led organization that advocates reproductive freedom.

“In honor of Matt Gaetz publicly body shaming me, I’ll be fundraising for the @genzforchange abortion fund,” she tweeted on Monday night.

And she has raised $1.4 million so far this week.

Upon hitting the one million mark last night, Julianna sent Gaetz a thank you card that read “How’s that for Dander raised? Get rekt.”

She pointed out that he mocked her to his 1.4 million followers when she hit $1.4 million raised.

Lol. Dander raised for sure.

“I’m in shock,” she told Newsweek. “I did not think this would be as successful as it’s been. My goal was only to raise a few thousand dollars; I never expected for this to take off as much as it has.”

She told The Advocate that the money raised will be split among 50 abortion funds.

“I think it’s hilarious that Matt Gaetz underestimated me and didn’t think that I would clap back in such a strong way,” she said.

“It goes to show no matter how young you are, no matter what position of power you’re in, you can make a difference.”