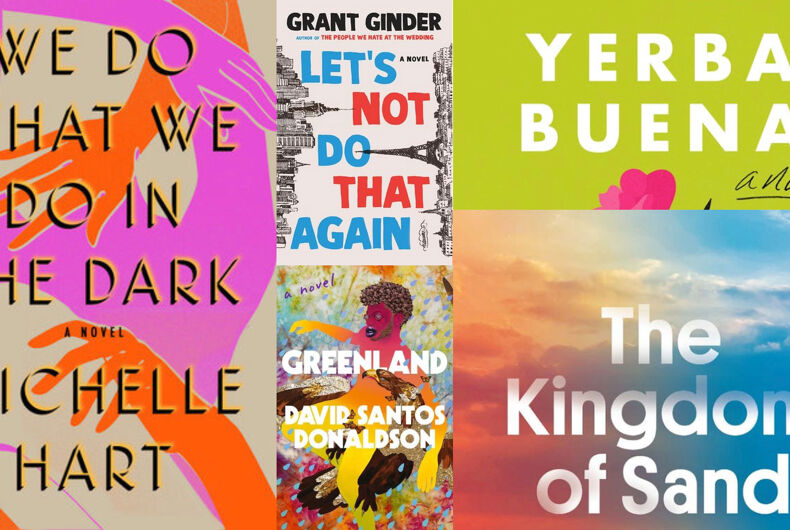 By this point in the summer, you may have already finished a beach-read or two. Which means you’re probably looking for the next book you’re going to dive into.

2022 has seen plenty of notable LGBTQ books released so far. These are just a few picks to keep you reading this summer.

Let’s Not Do That Again, Grant Ginder

A driven senatorial candidate is forced to clean up the lives of her two adult children: one a floundering musical theater writer, the other…newly involved with radical protesters in Paris. This smart, funny novel from the author of The People We Hate at the Wedding has been described as Veep meets The Other Two—and it’s honestly hard to imagine a better recommendation that that!

We Do What We Do in the Dark, Michelle Hart

Mallory, a college freshman mourning the recent death of her mother, becomes entranced by a much older, married professor. The two women begin an affair that turns Mallory’s world inside out. Drawing comparisons to Sally Rooney, if you’re looking for a summer romance with a dash of melancholy, look no further than Michelle Hart’s debut novel.

E.M. Forester has been having quite a moment in the past few years. There was the acclaimed TV adaptation of Howard’s End starring Hayley Atwell. Then Matthew Lopez gave the novel and its author a contemporary spin in his play The Inheritance. Now, in David Santos Donaldson’s debut novel, gay Black British author Kip struggles to complete his own novel about Forster’s secret affair with a young Egyptian tram driver, Mohammed, in the early 20th Century. Exacerbated by his self-imposed isolation, Kip’s connection to Mohammed begins to bleed into his real life in this vivid debut.

Flowers, cocktails, romance—what more do you need from a summer book? Young adult author Nina LaCour first work of adult fiction concerns two young women—talented mixologist Sara and flower arranger Emilie—who meet and fall in love. But just as they’re beginning to build a life together, their painful pasts catch up with them. This sensual novel asks whether love can overcome everything that came before it.

The Kingdom of Sand, Andrew Holleran

As melancholy as a summer Sunday sunset at 8:45 p.m., Andrew Holleran’s beautiful new novel is a study in solitude. The nameless gay narrator, stranded in small-town Florida after the death of his mother, drifts along, observing the quotidian aspects of his quiet, lonely life.

There’s also his friendship with a much older gay man named Earl, whose health is failing. But this novel’s power lies in its unflinching examination of a solitary life.

Berlin mosque becomes the first to fly the rainbow flag