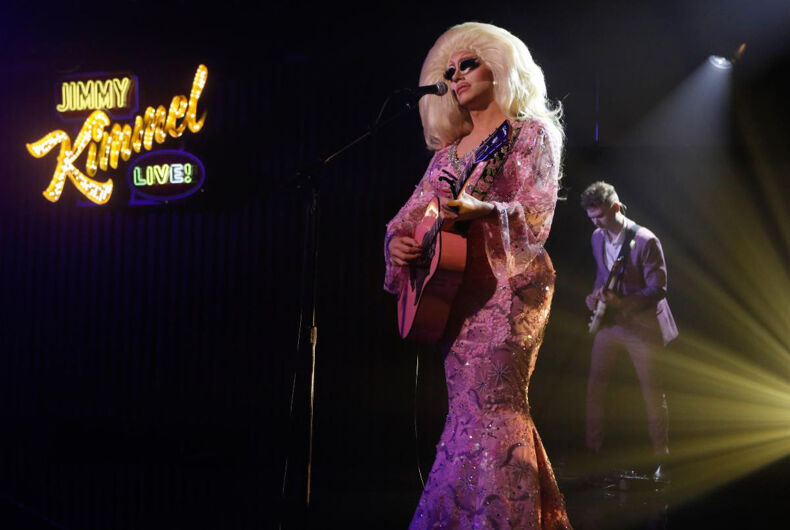 Trixie Mattel became the first drag queen to perform as a musical guest on a late-night comedy show this week when she sang her new song “This Town” on Jimmy Kimmel Live!

The RuPaul’s Drag Race season 7 alum and All Stars season 3 winner was wearing a pink western sequins dress as she performed the song with folk singer Shakey Graves. “This Town” will be on her forthcoming double LP The Blonde & Pink Albums

Related: Buttigieg hosts Jimmy Kimmel Live & jokes that he was “38 years too gay” to be president

Trixie Mattel has cemented her spot as one of the most successful queens to have appeared on the popular reality television series, with albums that have hit number one on iTunes, a successful make-up brand, a stint as a judge on Queen of the Universe, and an upcoming reality show about renovating a hotel in Palm Springs under her… corset.

“I’ve played guitar since I was 13. I always envisioned Trixie as a comedian, but I never considered weaving my songwriting in to my standup sets,” Trixie told Renowned for Sound in an interview.

“When I started combining music and comedy at 25, it was like an instant lightbulb moment. People would sit through my hour long comedy show and at the end of the night tell me their favorite part was the ballad I weaseled into the section about breakups. I am only good at making people laugh or cry.”

Editor’s note: A reader reminded us of Jim Bailey, who performed – and sang – in drag in the 1970s on television talk shows. Here’s a video of him performing as Judy Garland on The Ed Sullivan Show.