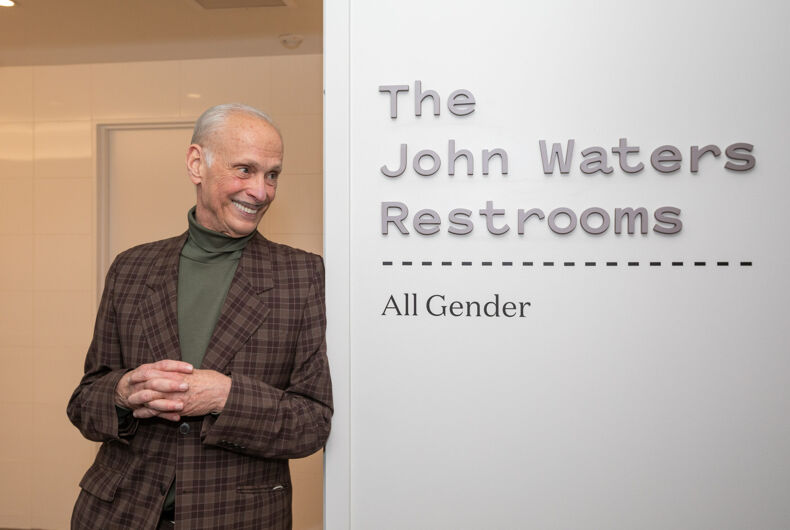 John Waters at the entrance of the Baltimore Museum of Art's "The John Waters Restrooms."Photo: Erika Nizborski

If you think it’s about time that writer and filmmaker John Waters got a star on the Hollywood Walk of Fame, you can thank Outfest Los Angeles. The LGBTQ-oriented arts and entertainment organization, which is celebrating its 40th anniversary, nominated Waters for the honor and its recommendation was accepted by the Hollywood Chamber of Commerce, which administers the Walk of Fame and selects the recipients.

It was the first time Outfest has sponsored anyone for a star, and executive director Damien Navarro said he was “elated” with the outcome as he shared the inside story about the nomination with LGBTQ Nation.

Related: John Waters unveils all gender restrooms named after him at art museum

Given its success, Navarro said, he’s encouraged to try again.

“It’s our first time that we’ve submitted and obviously will not be our last,” he said. “There aren’t any regular organizations that are doing this with the queer community.”

Nominating artists for recognition is consistent with the non-profit’s goals of supporting and educating LGBTQ artists and celebrating the work they do at all stages of their careers, he said.

“It’s part of our mission,” he said, “to be able to immortalize and make sure that, for decades and generations to come, people can access films from our past, stories from our past, or taking somebody like John and making sure that somebody has sponsored and honored him in the very special way that only a Hollywood Walk of Fame star can.”

What? He Isn’t There Already?

Waters, who is gay, is one of 24 individuals or groups named this year to receive stars on the Walk of Fame in 2023. Celebrities were chosen in four categories: motion pictures; television; recording and live theater/live performance.

Waters, 76, was selected in the motion pictures category along with six others, including two who were named posthumously. Navarro said the only other Walk of Fame star recipient for 2023 that he could see with an LGBTQ connection is Pentatonix, a five-member a cappella group that strongly supports the LGBTQ community and includes two out performers, Scott Hoying and Mitch Grassi.

Based in Baltimore, Waters has written and directed 16 movies and hints that another may be in the works. This month the Criterion Collection brought out a special edition Blu-ray version of Pink Flamingos, which was added to the National Film Registry in December and marked its 50th anniversary in March.  Several theaters around the country are screening the film this summer in honor of its anniversary.

“I would be honored if a show-biz wannabe pounds the pavements of Hollywood over top of my star, just like I did over others’ the first time I ever went to Los Angeles,” he told LGBTQ Nation.

Waters said he continues to visit the Walk of Fame when he’s in Los Angeles. “I walk up and down that still. The last time I was in LA, I stayed on Hollywood Boulevard…I walked over those stars.”

Founded in 1982, Outfest calls itself “an organization that centers on storytelling.” Its programs are intended to give artists, filmmakers and entertainment professionals a chance to discover their voices, gain visibility and make sure that their legacies will live on for generations to come.

Navarro, who became executive director in 2019, said Outfest has honored Waters and screened his films in the past, and it wanted to propose a candidate for the Hollywood Walk of Fame. Looking over a list of possible nominees, he said, he was surprised that Waters didn’t already have a star and felt he would be a good choice for the group’s first nomination.

“When we were looking at what we could do post-40th anniversary — this is something that’s been on our list for a while — what we were looking at: one, who has been part of our community for decades that would correspond to a meaningful recommendation or submission for us?, and two, who would shock people if they learned they weren’t on the Hollywood Walk of Fame, that is from our community?

“John was one of first ones that I did a quick search of, as I was thinking who would be really meaningful for us and, as most probably are, [was] shocked that he was not listed on the Walk of Fame,” Navarro said. “That made it a little easier. And we honored John a few years back with one of our big awards. In 2012, we awarded him with the Outfest Achievement Award, which is our highest honor…So it was several check boxes that quickly came together that put him as the frontrunner for who we would submit for our first time.”

The Nitty Gritty of the Selection Process

Planning for the Hollywood Walk of Fame started in the mid-1950s as a civic beautification project; the first eight honorees were named in 1958 and the first stars were unveiled in 1960.

The Walk of Fame now stretches for 15 blocks of Hollywood Boulevard and three along Vine Street, has more than 2,700 stars, and draws upwards of 10 million visitors a year. In 1978, the Cultural Heritage Board of the City of Los Angeles designated the Hollywood Walk of Fame a Los Angeles Historic-Cultural Monument, giving it landmark status.

The Walk of Fame selection committee, which consists of people who already have stars, chose the “Class of 2023” honorees out of hundreds of people who were nominated. It typically adds two dozen recipients a year or more, which works out to about two per month.

According to the chamber, being nominated doesn’t automatically mean a star will appear on the Walk of Fame. Honorees have two years to accept the award, which has a fee attached. The terrazzo and brass stars reportedly come with a fee of about $55,000, which covers the cost of creating and installing them and maintaining the Walk of Fame.

The selection panel “hand-picks a group of honorees each year that represent various genres of the entertainment world,” Ellen K said in a statement. “The panel thoughtfully selected these talented individuals, and we can’t wait to celebrate them as they become part of Hollywood’s history with the unveiling of their star on the world’s most famous walkway!”

Dates for the individual ceremonies in 2023 have not been announced. After being selected, honorees must schedule a ceremony they will attend, and the ceremonies are announced by the Walk of Fame committee 10 days before they take place.

Waters said he knew he was under consideration this year. He said an Outfest representative contacted him and asked if the organization could sponsor him and he said yes, but he didn’t have any advance notice that he was selected.

Waters said he is “eternally thankful” to Outfest for sponsoring him and honored that its members wanted to do so. He said he knows a lot of work goes into preparing a submission.

“You have to have a sponsor for it,” he said. “Outfest Los Angeles, which is one of the oldest gay festivals in America, called and asked me if they could do it, and I was thrilled.”

“I am really excited about it,” he added. “Are you kidding? I wish my parents were alive.”

Navarro said the Hollywood Chamber of Commerce has a lengthy application process for groups that want to nominate someone for the Walk of Fame, and artists can’t nominate themselves.

“It’s a third party that typically has to nominate,” he said. “There are multiple check boxes that have to be completed…Those are things like: What are their contributions to the community? What types of mission-driven work have they done? Obviously, how far back does their body of work go? I believe it has to go farther back than a decade. What are their contributions to whatever the category is, in this case, film. Any kind of notability or awards that they have received.”

Navarro said he’s aware that out performer Lily Tomlin got her handprints and footprints embedded in the sidewalk outside TCL Chinese Theatre on Hollywood Boulevard this year, but he believes there’s an opportunity for Outfest and others to help make the Hollywood Walk of Fame list more diverse.

“I think what this opens us up to is, annually, we will start to make our own list of the icons of our world that have yet to receive this level of achievement and [come] up with a much more structured way of being able to determine who are we electing per year.

“It’s our 40th anniversary. This is a great way to build into an anniversary year an announcement of what’s to come, how are we going to start elevating the voices and preserving those voices for the next decade using some of these iconic and maybe not so iconic ways.”

As the first person of color to run Outfest, he said, “it’s incredibly important to me that we leverage all kinds of voices…I think there’s a stigma that there isn’t enough abundance or area to support everyone, and so I think we over the years have been pressured to feel like there’s just not enough to go around to recognize everybody. That’s not how I look at things.”

Navarro said Outfest has agreed to cover the cost of placing a star on the Walk of Fame for Waters. He said he doesn’t yet know how Outfest will come up with the money, but it likely will host a fundraising event or otherwise seek donations. He said he’s open to the idea of a GoFundMe-type campaign since that would give Waters fans a chance to get involved and show their support. It “spreads out the love that I know so many people have for his work, including myself,” he said.

Waters and Navarro said they don’t know when a ceremony for Waters’ star unveiling might be. Not far from the Walk of Fame, the Academy Museum of Motion Pictures on Wilshire Boulevard is planning a major exhibit on Waters and his career for next summer, entitled ‘Pope of Trash.’

“We are hoping that it is very close to when the Academy Museum show opens in Los Angeles,” Waters said about a date for the star ceremony. “That would be the greatest tie-in.”

“It’ll be the summer of John Waters,” Navarro said.

Waters added that he doesn’t know where his star will be located and he has no preference.