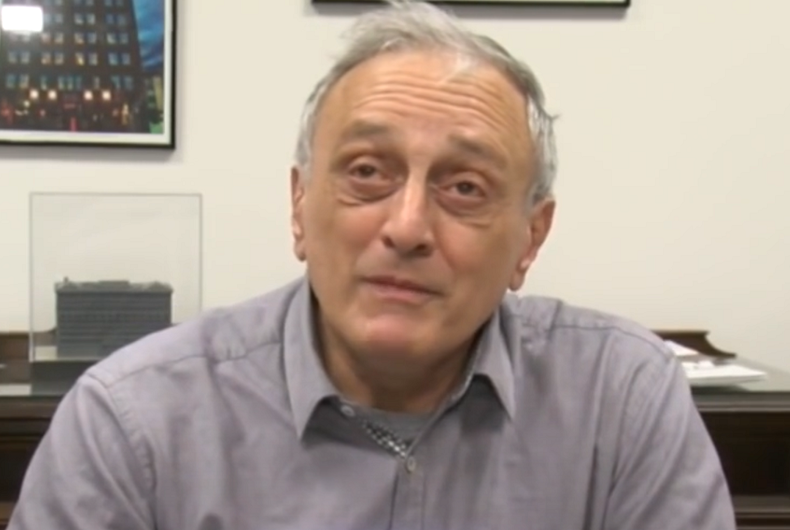 A GOP candidate in New York known for his extreme anti-LGBTQ and racist views praised Adolf Hitler during a radio interview last year that was unearthed this week, calling Hitler “the kind of leader we need today.”

During a February 2021 interview on WBEN in Buffalo, host Peter Hunt asked Paladino, “How do you rouse the population? How do you get people thinking about the possibility of change here in New York state and what that might mean for our, for everyone here?”

While Paladino could have pointed to a number of charismatic leaders from history, he chose to extol Hitler, whose regime systematically murdered six million Jewish people and millions of other people deemed undesirable, including tens of thousands of gay and bi men.

“I was thinking the other day about — somebody had mentioned on the radio Adolf Hitler and how he aroused the crowds,” Paladino said, laughing. “And he would get up there screaming these epithets and these people were just — they were hypnotized by him. That’s, I guess, I guess that’s the kind of leader we need today. We need somebody inspirational, we need somebody that is a doer, somebody that has been there and done it so that it’s not a strange new world to them.”

Paladino released a statement yesterday saying that he isn’t actually a fan of Hitler.

“Any implication that I support Hitler or any of the sick and disgusting actions of the Nazi regime is a new low for the media,” he said. “The context of my statement was in regards to something I heard on the radio from someone else and was repeating, I understand that invoking Hitler in any context is a serious mistake and rightfully upsets people. I strongly condemn the murderous atrocities committed against the Jewish people by Hitler and the Nazis.”

Paladino has a long history of discriminatory statements. While running for governor in 2010 against Andrew Cuomo, Paladino infamously claimed at an appearance with Hasidic leaders in Brooklyn, “My children and your children would be much better off and much more successful getting married and raising a family, and I don’t want them brainwashed into thinking that homosexuality is an equally valid and successful option — it isn’t.”

Paladino also slammed Cuomo for taking his daughters to that year’s Pride Parade: “Have you ever been to one? The men wear little Speedos and they grind on each other. Would you take your children there? I don’t think so.”

Also in 2010, Paladino ran a radio ad calling for the destruction of the mosque being built near the World Trade Center site, making it “a war memorial instead of a monument to those who attacked our country.”

In 2016, Paladino, then Trump’s New York state campaign chair, called for hanging a Republican convention delegate for treason because she opposed Trump’s nomination.

He also tweeted that New York Attorney General Loretta Lynch should be lynched, and falsely claimed in an interview with the New York Observer that President Barack Obama was a secret Muslim.

In 2017, Paladino was fired from the Buffalo School Board when his answers to an alt weekly’s New Years survey came to light: Paladino hoped “Obama catches mad cow disease” and Michelle is returned “to being a male and let loose in the outback of Zimbabwe where she lives comfortably in a cave with Maxie, the gorilla.”

Rep. Elise Stefanik (R-NY), a member of the party’s leadership in the House, has already endorsed Paladino and she released a statement to say that she’s standing by him, accusing journalists of taking his statement “out of context.”

The relevant exchange starts at the 37:45 mark at the linked podcast.

Notes of Hope: Music Born of the Pulse Shooting