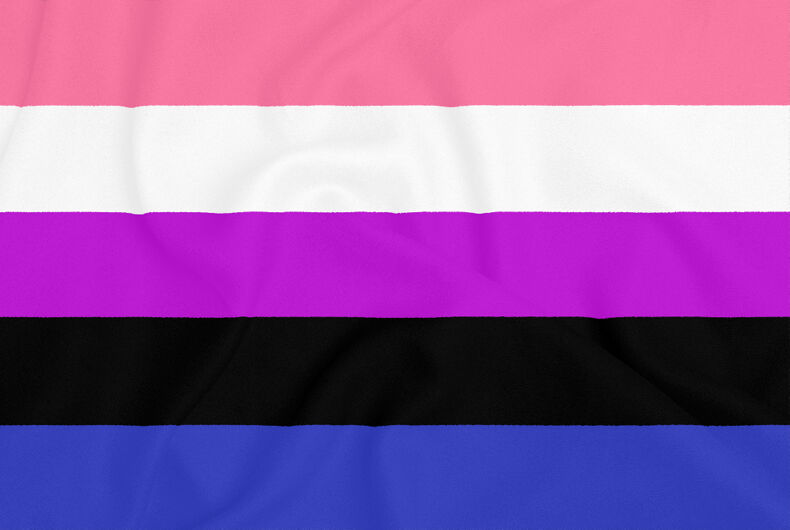 Since the first pride flag was created, many LGBTQ people have created their own versions to represent the various identities and orientations that fall under this vast umbrella. Here, we take a look at the genderfluid flag, its meaning, colors, and the community it represents.

What Does It Mean To Be Genderfluid?

According to the Human Rights Campaign, a person who identifies as genderfluid (also spelled gender-fluid) is someone who “does not identify with a single fixed gender or has a fluid or unfixed gender identity.”

Sounds confusing? Let’s break that down.

Gender identity is defined as a person’s innermost concept of self – be it male, female, neither, or something in between. Your gender identity can be the same as your sex assigned at birth (the sex that a doctor describes you upon birth based on your external anatomy) or it can also be different. Those who fall into the former camp are called “cisgender” while those who fall into the latter can be described as transgender.

Then, there are non-binary people – people who do not identify exclusively as men or women. They’re called non-binary because they don’t identify with the traditional binary understanding of gender (as in male or female only).

Non-binary (NB) people see gender as a spectrum – a vast expanse where they can identify somewhere in between or outside of the gender binary altogether. Non-binary is also considered an umbrella term for several gender identities, including agender, bigender, and, yes, genderfluid.

Not all NB people are genderfluid, however. Agender people often describe themselves as genderless. In other words, they don’t identify with any particular gender. Bigender people identify with two distinct genders, usually simultaneously. So, a bigender person can identify as male and female at the same time.

Another thing to remember is that gender expression and gender identity are independent of one another. This means that how you like to present yourself on the outside may not necessarily reflect how you feel inside.

Genderfluid people may choose to express themselves the way they identify currently, or they may choose not to reflect their current gender identity through their clothing and behavior. The bottom line? You can’t really infer someone’s gender based on their appearance!

What Is The Genderfluid Flag?

The most popular genderfluid pride flag that is used today is a five-color flag created by JJ Poole in 2012. Poole is an agender pansexual from New York state who designed the flag to represent all the possible gender identities that genderfluid people may identify with.

The genderfluid’s flags colors include:

Another popular genderfluid flag that’s gaining traction in the community is the wave flag. Created by LGBTA wiki user “FruitIndividual”, the flag features four colors – pink, white, purple, and blue – set in alternating wave patterns instead of straight stripes. The waves are said to represent the fluidity and change experienced by those who identify as genderfluid.

There is another similar flag featuring an additional three colors – light pink, light purple, and light blue – all set in waves.

In my research for making this image, I came across a hilarious version of the gender fluid flag that is wavy 😭

“The fluidity and change experienced by persons with this identity are represented by the wave pattern of the lines.”
– 🔩⚾️ pic.twitter.com/5TUA1ZBRMh

While Poole’s flag has been more or less accepted as the de facto genderfluid pride flag, it’s important to note that there is no single organizational body that decides which flags become official symbols for the community.

As such, people are free to create their own flags and symbols. To date, there are about 15 alternative versions of the genderfluid pride flag on the Gender Wiki.

Sexual orientation and gender identity are two independent components of one’s identity. When we say independent, we mean that one does not influence the other. Thus, you can identify as genderfluid and bisexual, lesbian, gay, straight, asexual, etc.

Thanks to sites like Reddit, Tumblr, and Twitter, artists have been able to express their creativity and create specific flags to represent the intersections of their sexuality and gender identity. Here are some examples of genderfluid flags that also represent various sexual orientations:

The bi genderfluid flag represents genderfluid people who also identify as bisexual. For the uninitiated, bisexuality is defined as being attracted to people of the same and the opposite sex, gender, or gender identity.

The genderfluid lesbian flag represents genderfluid people who also identify as lesbian. This means that, while their gender identity may fluctuate, their sexuality is exclusively oriented towards women.

The genderfluid flag is a symbol of pride and identity for the genderfluid community. It represents all genderfluid people, regardless of their specific experience or expression of gender.

Related: Back to school shopping with my gender-fluid genderqueer niece was eye-opening

A religious kook rushed the stage to scream at a drag queen. He didn’t get the response he expected.