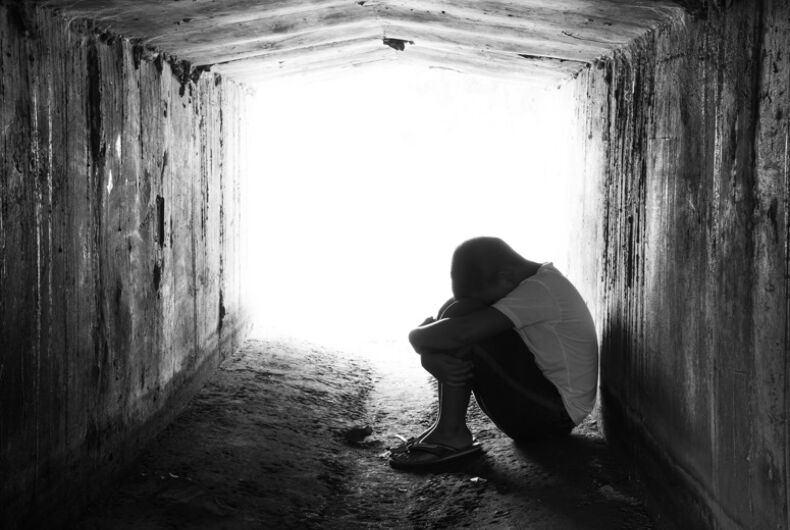 A mother kicked her nine-year-old son out of her home after abusing him for years because he was gay. He was then trafficked for years and sexually molested while law enforcement looked the other way.

Now, at age 39, the victim is speaking out against the horrors he suffered as a child because his mother thought he was “a predator.”

Related: Mother brutally stabs her teenage son to death because he was gay

This past year, Richie Barlow received a 40,000 GBP (about $49,000 U.S.) settlement from the Nottinghamshire, U.K., County Council and a letter of apology for allowing him to be abused for years. But that doesn’t erase the memories of being abandoned by his mother, tortured for being a gay boy, and then having to fight for decades to get the government to admit that it was wrong.

“Even in my earliest memories, my mum beat me and tortured me for being gay,” Barlow told Nottinghamshire Live, saying that he knew that he was “different” when he was four-years-old and that his mother “could tell.”

“I was imprisoned in my bedroom with no access to the toilet, no blankets or pillows and no food for days on end,” he recounted, adding that she would “pour fairy liquid and chili powder down his throat.”

“When I was about nine I was taken into care and for the first two weeks I thought I was in heaven,” he said. “For the first time ever I had a bed and food and a warm roof over my head.”

Barlow was in state care for two weeks when his mother came to visit him and accused him of crimes. She forced him to admit that he was gay at age nine in front of staff and other children at the care center as she gave him up to the government.

“That was the beginning of my nightmare,” he said. Staff now knew that he was gay and nine years old, and Section 28 – the U.K.’s Don’t Say Gay law that “prohibited the promotion of homosexuality” to minors – was still in effect at the time. Barlow said that LGBTQ people were seen as “subhuman” at the time.

He was placed in two different care centers over the next four years, where he was repeatedly raped. Men paid to sexually abuse him as he was trafficked by a pedophile ring, while care center staff did nothing.

“I was beaten within an inch of my life constantly, I was raped, I was trafficked,” he said. “I was beaten almost to death if I didn’t do as they said. I was sexually assaulted at knife point.”

“Everywhere I went, I was telling them what was happening to me, the police knew about it, the staff knew about it and they wouldn’t do anything about it,” Barlow said.

It wasn’t until he was 14-years-old that Barlow was able to get free. He was made to participate in arson, got caught, and was moved to a secure home by a court. His foster mother Anna took him in.

Barlow was able to show 26 incidents of abuse that the council knew about but didn’t do anything about.

“When I got my records it was absolutely damning,” he said.

In February 2021, he finally got an apology from the Nottinghamshire County Council and a settlement.

“My purpose in writing is to apologize to you for the abuse you experienced as a child within our care,” Corporate Director of Child Services at Nottinghamshire County Council Colin Pettigrew wrote in a letter. “You entered into the care system at a young age and you should have been safe from harm and it is clear that this was not the case and I am truly sorry for that.”

Barlow has a book out about his life called, Richie – Who Cares? He’s married now to his husband Ben and he owns a dog-walking business.

And he’s still speaking out against Section 28.

“I’m surprised I survived, I shouldn’t be here to be talking about this, there were countless times that I could have died,” Barlow said. “I do feel like I have offloaded by writing this book but ultimately the only thing I want out of it is to protect people and show people what bigotry can do.”

“Section 28 was ultimately responsible for my abuse because nobody cared about me, and I never want anyone else to go through that. Before I met Ben I felt like I was in survival mode, I wasn’t really living, it’s because of him that I’m living my life and I’m happy.”

His biological mother is dead.